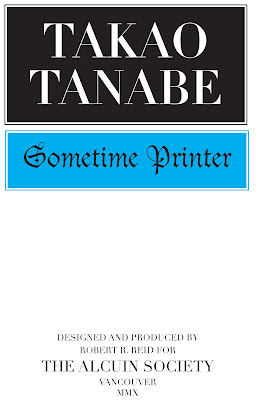 Best known now as a painter of muted and sublime Canadian West Coast vistas, Takao Tanabe paid the rent during the earliest days of his career as a job printer in Vancouver (having been introduced to the trade by Robert Reid). Under his own Periwinkle Press imprint he issued a handful of poetry chapbooks and broadsides, in addition to titles produced for other West Coast literary publishers. As illustrated in a new book featuring many samples of his printing from those days, he brought an artist's sensibility and creativity to his work, producing typography that ranged from austere to playful.

Printing ceased to be part of Tak's creative life about 45 years ago, but his reputation as a designer with type persists. Tak recently donated a large collection of his printing work and ephemera to Simon Fraser University. Drawing from this extensive collection, Robert Reid and the Alcuin Society have just completed Takao Tanabe: Sometime Printer reproducing a selection of examples from the SFU collection. From the book's prospectus:

"Tak not only printed books, which one expects from a “Private Press,” but was a master at Job Printing. His typographic imagination could run riot, producing an abundance of invitations, birth announcements, Christmas cards and ephemeral printing for Vancouver’s sophisticates, who had the sensibilities to recognize a master at work in the 1950s and '60s."

Sometime Printer is 156 pages of reproductions from books and job printing, all in full colour, with 19 tip-ins. It is similar in format and production to the Alcuins' previous publications, Duthie Bookmarks and Dorothy Burnett Bookbinder. The edition is 50 copies, priced at $185.00. Contact --- for further details, and inquire about the possibility of obtaining a copy signed by Tak. Or, get one before October 26, when a show of new watercolors by Tak opens at the West Vancouver Gallery, and ask him to sign your copy at the opening.