Making an Exhibition of Ourselves 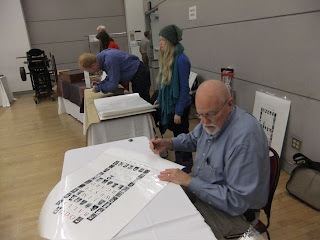 Another post from last weekend's Wayzgoose printing fair, this one all about us (mostly). Jim Westergard and his wife flew in from Red Deer to accompany Oddballs' first (& only, at least by us) exhibition in Canada, and it was brilliant to have them on hand. As previously mentioned, we printed up 10 copies of a poster ganging all 40 (plus one) of the oddballs together, which Jim signed and numbered with assistance from the HM devil, before the doors opened. These are 22 x 30 inches (image area is about 12 x 21 inches), giclée printed on 180 g all-rag paper. A few copies of these remain, priced at $60.

Barbara Hodgson was on hand to discuss The WunderCabinet, a display of which occupied most of HM's second table. As shown above, she didn't get a minute's rest all day, in large part due to an interview with her about the project which aired on CBC Radio's North By Northwest show that morning. As proven in previous years, a mention of the wayzgoose on Sheryl McKay's show assures a significant boost in attendance at the show, and this year was no different: many people came in specifically to see the book and meet Barbara, having heard the interview that morning. A podcast of can be found here. 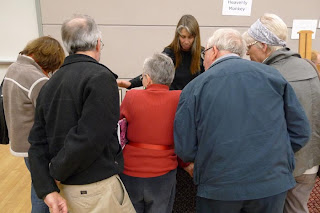 Jim was diligent about pulling his weight as an exhibitor, but he did manage to make a few circuits of the room over the course of the day. Below he's talking to HM's secret weapon, Reg Lissel, who was demonstrating how to make paste papers. 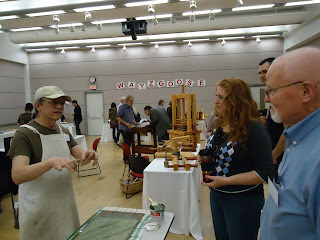 Jim brought along a number of the trade books that feature his artwork, and lucky people snapped these up (and got them signed). Jim's off to Toronto in late November for an event organized by Beasts of New York publisher The Porcupine's Quill. It will be an evening's discussion between/among Jim, author Jon Evans, and Toronto printmaker George Walker.