Celebrating Will Rueter With Broadsides 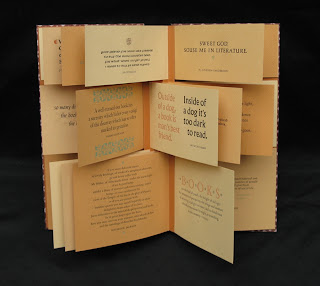 We'll have some more information & background about this up over the next week, but for now, just to start getting the word out:

On Thursday 21 March, Will Rueter will be in Vancouver to receive the Robert R. Reid Award & Medal for contributions to the book arts in Canada. (He'll also be one of the judges for the Alcuins' annual design awards, the following weekend.)

The evening is being hosted by the Alcuin Society. It will take the form of a discussion with Will about his work and career, led by HM publisher Rollin Milroy. There will be lots of images of his books and broadsides, and questions from the audience will be encouraged.

To help mark the event, the organizers are inviting designers and printers from far & wide to create a broadside for display at the event. The advert below has details. 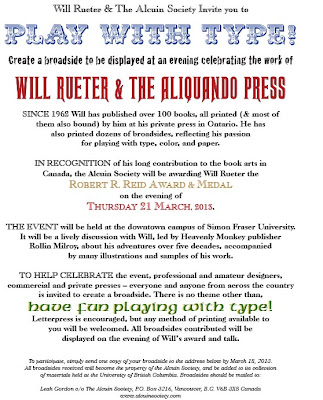 The concept is similar to the broadsides that were created to celebrate the work of Jim Rimmer in 2006 (see here; the first one shown is by Will), although they need not be specifically about Will or his work. The idea is simply to share in his love of the broadside as a forum for typographic play.

An interview with Will by poet Bernadette Rule...

Some info on Will's latest book...