A Designer Must Do It All, At Least Once 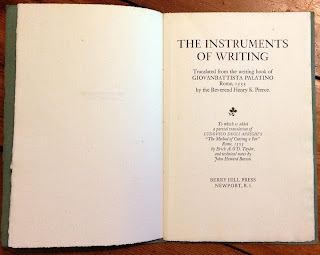 No news from or about HM - everything's happening as previously discussed & promised - so here's this: 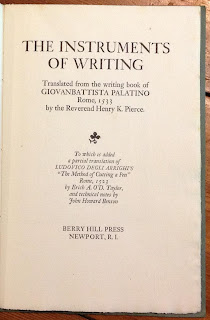 Found a few years ago on the shelves of the excellent Seattle bookseller John Michael Lang, excellent in particular because of his scouting prowess - with every visit to his shop you will encounter at least one item you have never even heard of before.

Looking for some content for today - anything! - we rummaged across the shelves and pulled this pamphlet out. Issued in 1948, printed by Crimilda Pontes in an edition of 100 copies. The paper is a lovely handmade, watermarked Arches [France]. Unfortunately she didn't dampen it for printing, so the presswork is a bit weak and inconsistent, but not awful. The joy to be had is in her mis-en-page. 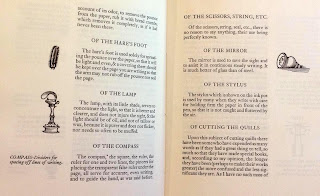 Doing some very quick searching for details on the translators, Rev. Henry K. Pierce seems to have been an Episcopalian minister in NYC; Erich Taylor went on to become a Rhode Island state senator; and John Benson, although last on the list, may be of greatest interest for this post: his career seems to have been devoted to working at the John Stevens Shop, and his son became one of the foremost American calligraphers, stone carvers and type designers in the 20th century. 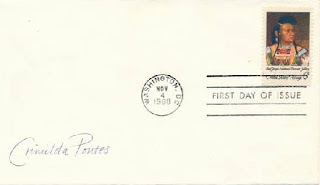 Over at Biblio, an interesting item is listed, along with a brief biography of Pontes: 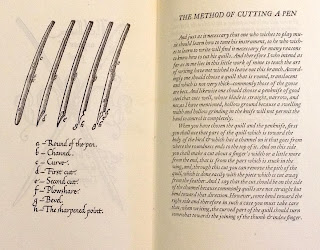 The pamphlet, which includes several full-page and numerous marginal illustrations, remains a valuable introduction to the materials and techniques of calligraphy. But it also is interesting as an example of a young graphic designer conceiving, planning and executing a project entirely on her own. The direct experience of setting type, working with paper, running a press and binding is invaluable for someone who will later play one specific role in the overall process; an appreciation for the practicalities of the other steps will make a better designer. Setting even a few lines of metal type, and having to letterspace headings with coppers and brass based on your best judgment in the stick (and then refine it once you've pulled a proof), will make for a more nuanced and aware typographer at the keyboard.

An Abe.com search for The Instruments of Writing initially was disappointing: there were a few copies, all priced less than ours cost. But closer reading identified these as a second (1953) printing of 300 copies, done by Meriden Gravure. It too is on Arches, but probably not the handmade. The 1948 original, printed by Pontes, is referred to as "very rare." The '53 re-issue looks to be identical, right down to the wrap, and it's cheap at the prices. Aside from the re-issue, this is the only title that shows up in Abe for Berry Hill Press, so maybe, having done it all once, Pontes decided to focus on the part that interested her the most. Crimilda's kool.