A Frank Look at More Dark 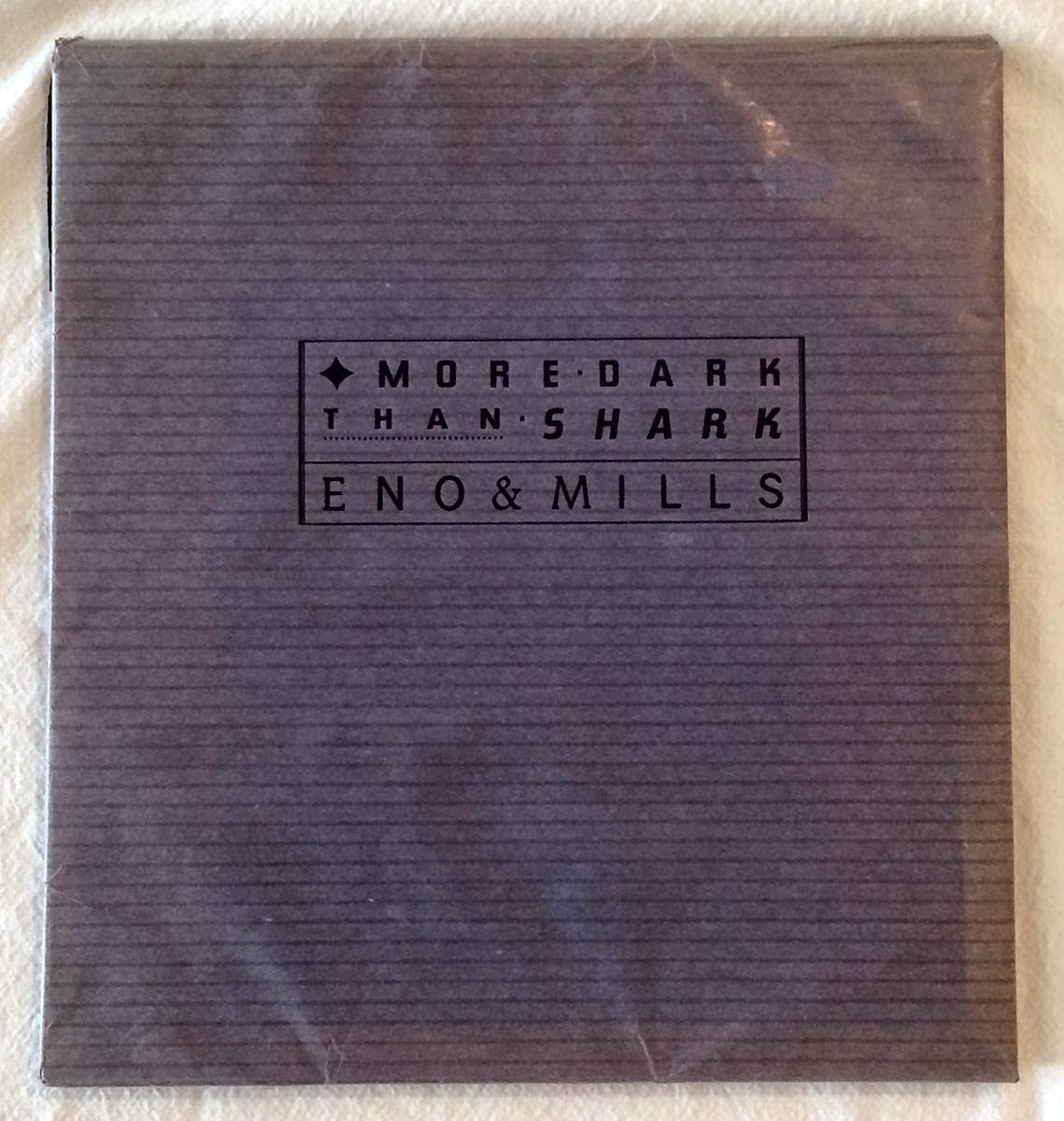 From its very start in 1929, the English publisher Faber & Faber has issued the occasional title it deems sufficiently important in a deluxe, limited edition format: James Joyce, T.S. Eliot and Siegfried Sassoon were the authors at the top of the roster whose work received special publishing attention. (There were a lot of other authors during the firm’s first decade, whose work hasn’t necessarily aged so well: several pages of pre-1940 Faber limited editions for under $25 on Abe. The boon for limited editions, and book collecting in general, started to decline right around the time Faber went into business.) It’s a tradition the firm continues to this day, albeit in a more select fashion. The limited edition page on Faber’s site currently includes a series of broadsides by four contemporary poets, specially commissioned by Faber and printed at Hand & Eye Letterpress in London. Today’s topic, in general, is limited editions issued by trade publishers; specifically, it’s about More Dark Than Shark, a book published by Faber in 1986. 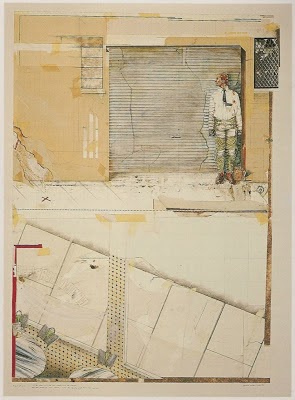 More Dark Than Shark reproduces works of art by Russell Mills inspired by Brian Eno songs, along with detailed notes by Mills and five insightful essays by Rick Poynor. It is perhaps the definitive study of the work that is the foundation for Eno’s ongoing influence in music, art and culture to this day. (The book was issued concurrent with an Eno compilation album, titled More Blank Than Frank; "Blank Frank" is the title of a song from his 1973 debut album Here Comes The Warm Jets.) The book is beautifully designed, by Malcolm Garrett (interesting to note that he’s credited on title page) and his team at assorted iMaGes, in a square format slightly smaller than an LP. Conzett & Huber of Zurich printed the book on a white coated paper. (Interesting factoid: the book was commissioned by Pete Townsend, who at the time was on sabbatical from The Who and working as an editor at Faber.) 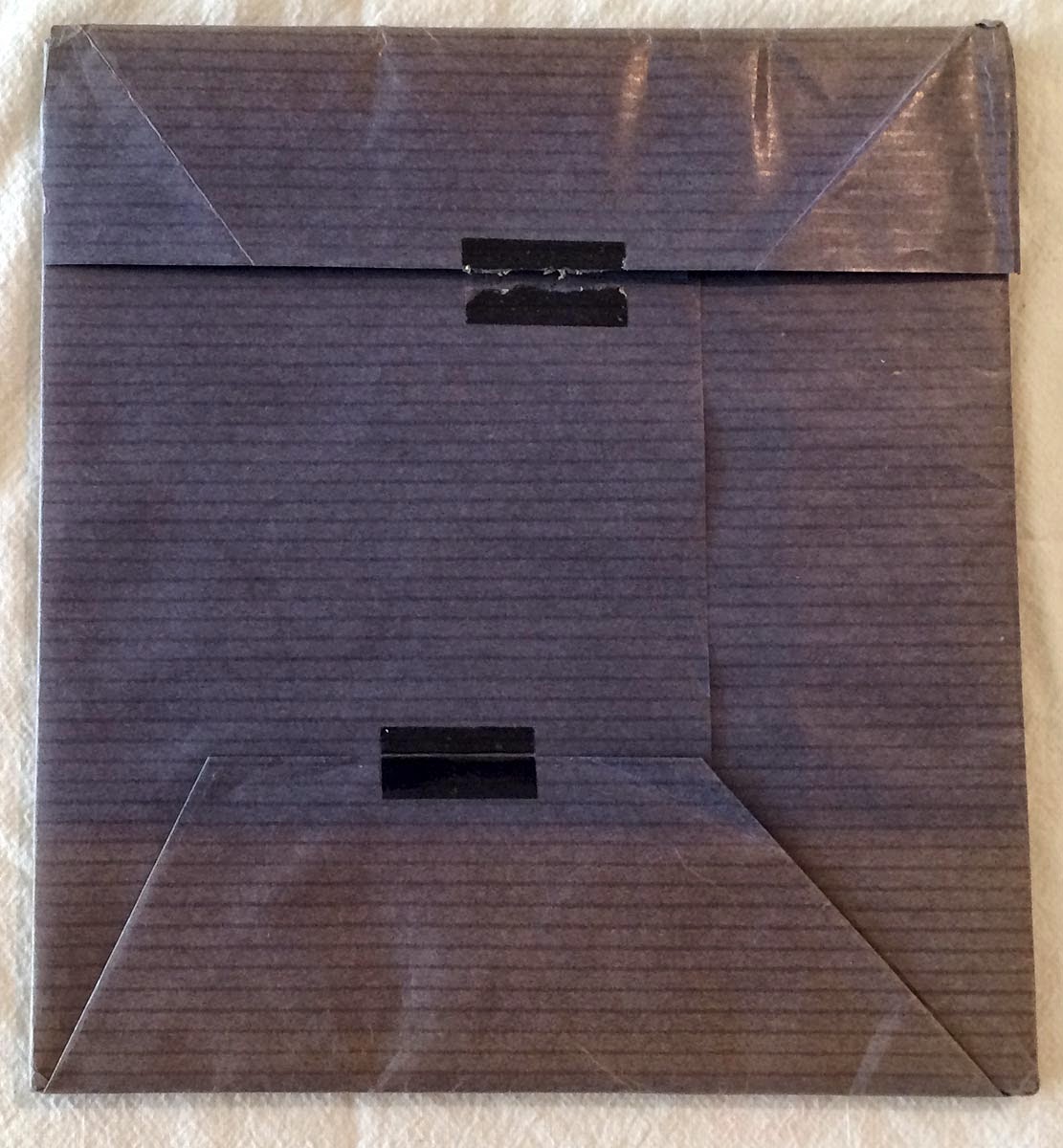 I found a copy of the book the year it came out, in Montreal at Cheap Thrills. It basically was a shop in the second-floor sitting/dining room of a brownstone walk-up near the gates to McGill. (Think it's still in the same location.) Sold used CDs, records and books, and lots of new imports, mostly from the UK. The copy of More Dark Than Shark I found there was wrapped like a package in a coated blue paper with the title and some rules printed letterpress, in darker blue. I was smart enough to keep the paper: I’ve not seen another copy with it, nor met anyone who’s seen it. 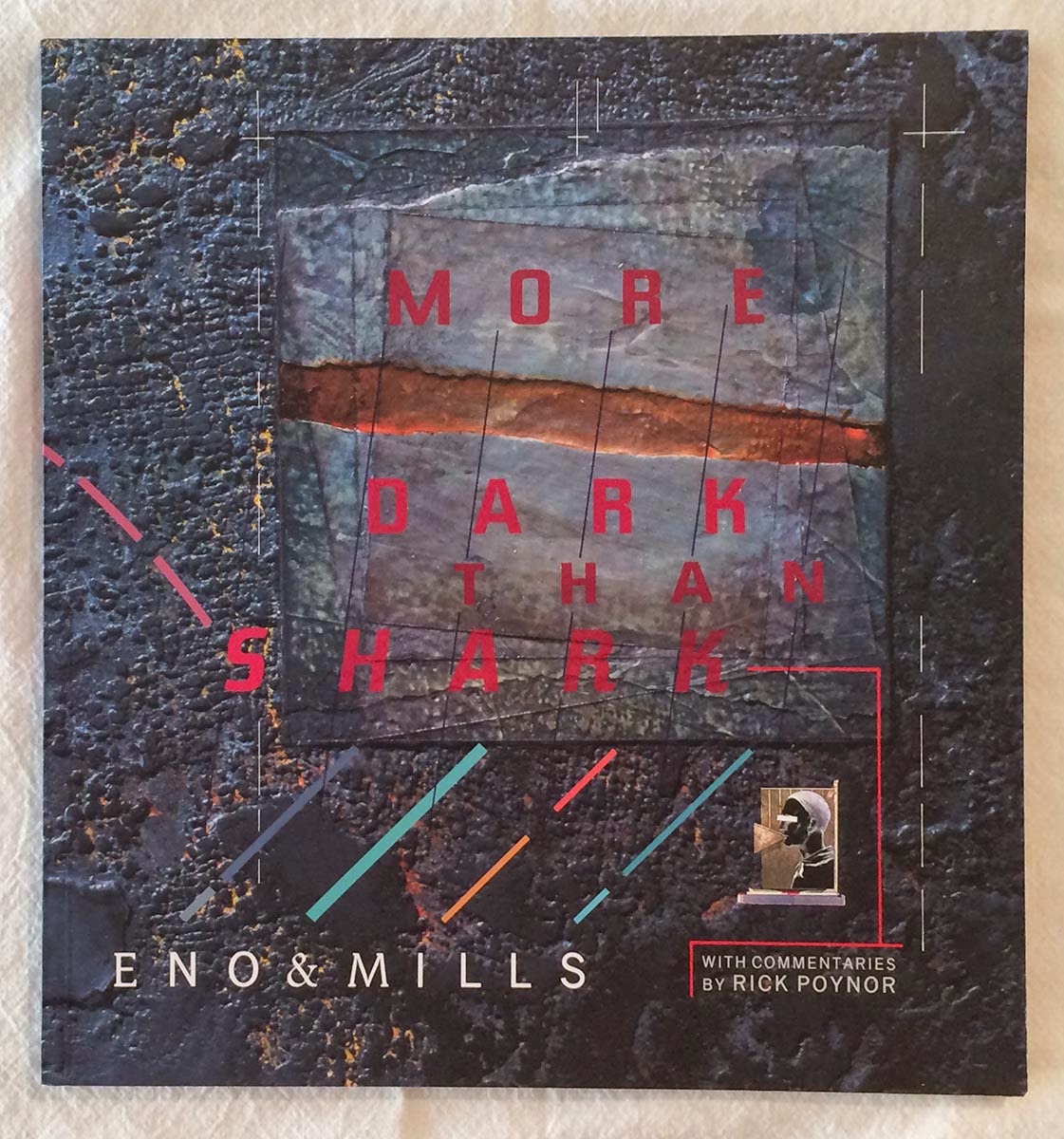 Inside the wrapping was a Smythe-sewn softcover of 144 pages. This isn’t a review of the contents or design, but suffice to say it’s a joy to look at and a trove for Eno fans to read. But paperbacks can be a pain: you’re always having to cradle the spine while reading, to prevent it from opening so much that the spine cracks, followed soon after by a book that falls apart. I wished I could find a hardcover, to have something both more readable and permanent. The publishing info indicated there was a hardcover, but all pre-1990 inquiries turned up nothing. 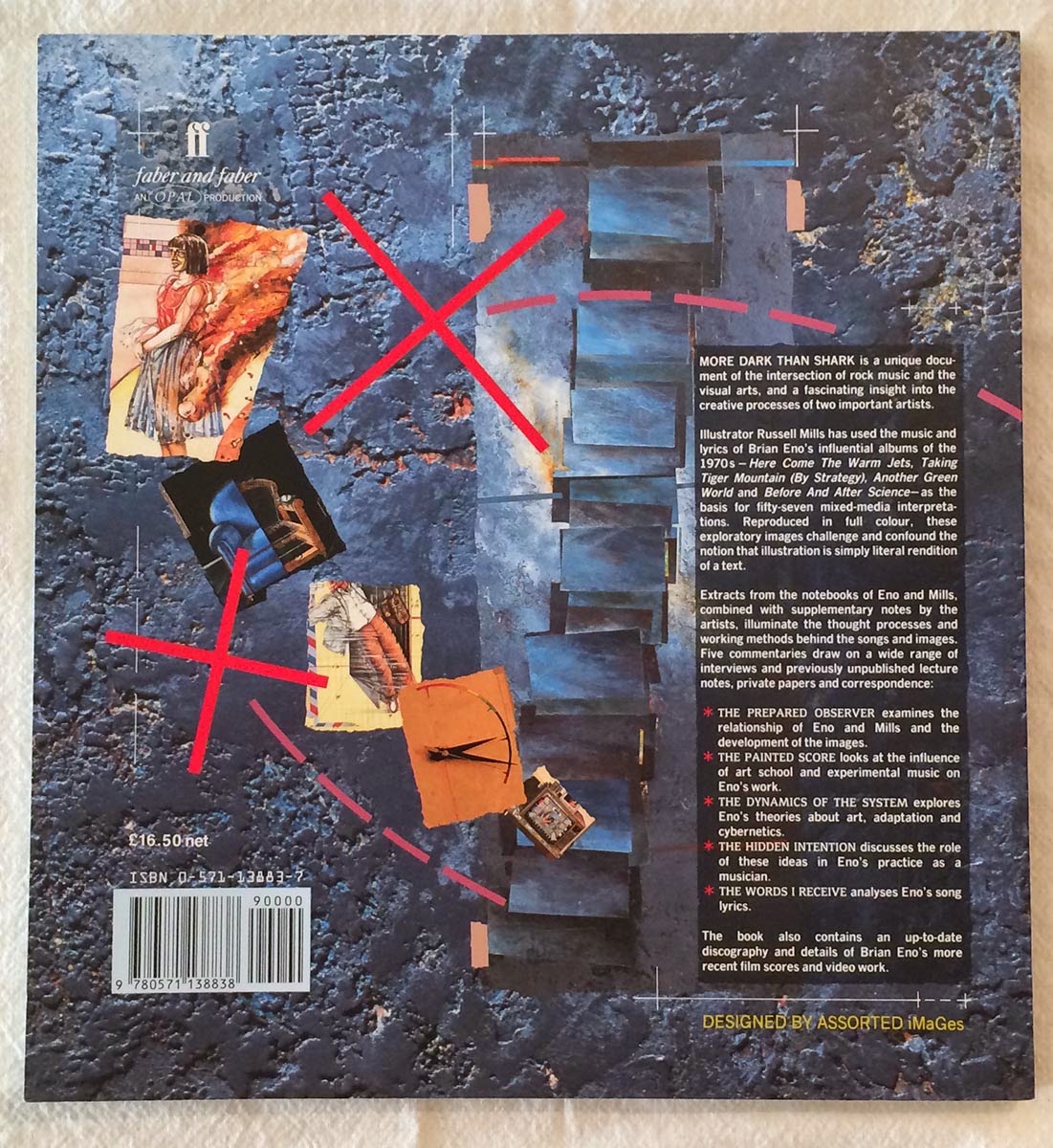 Some years later, post-World Wide Web, I learned that the hardcover actually was a limited edition of just 150 copies, signed by Eno and Mills, and issued with a print. Huh. No idea what the issue price was, but twenty years later it hovered around $2,000, if you found a copy. 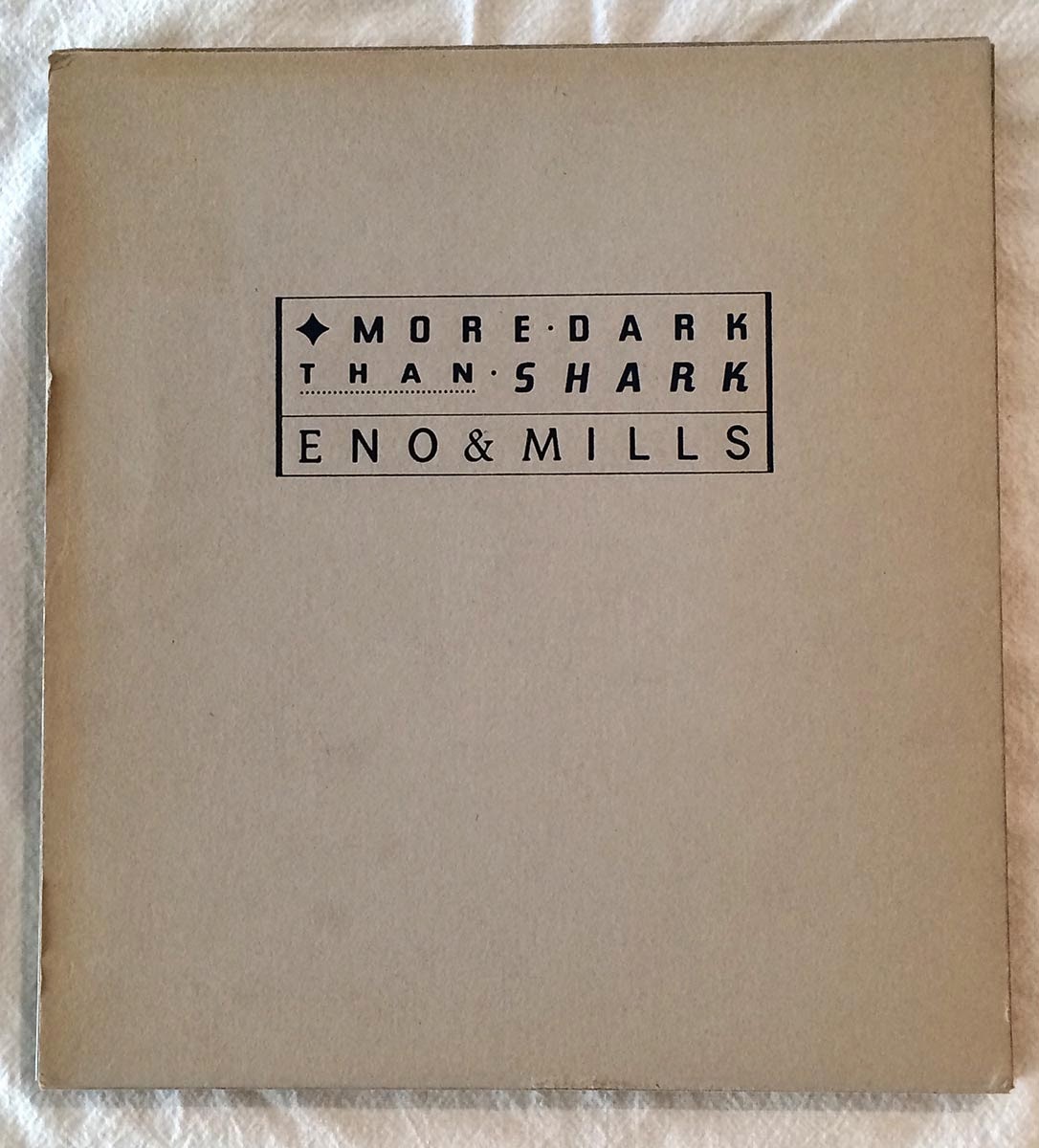 Long story short, I recently found a copy, or it found me. (A few seem to have turned up in the last two months.) It was very interesting to compare it to the softcover. (No idea if Garrett was involved in designing the hardcover, but for reasons that follow I suspect he was not, and that its format was ultimately determined by someone more like a production manager.) 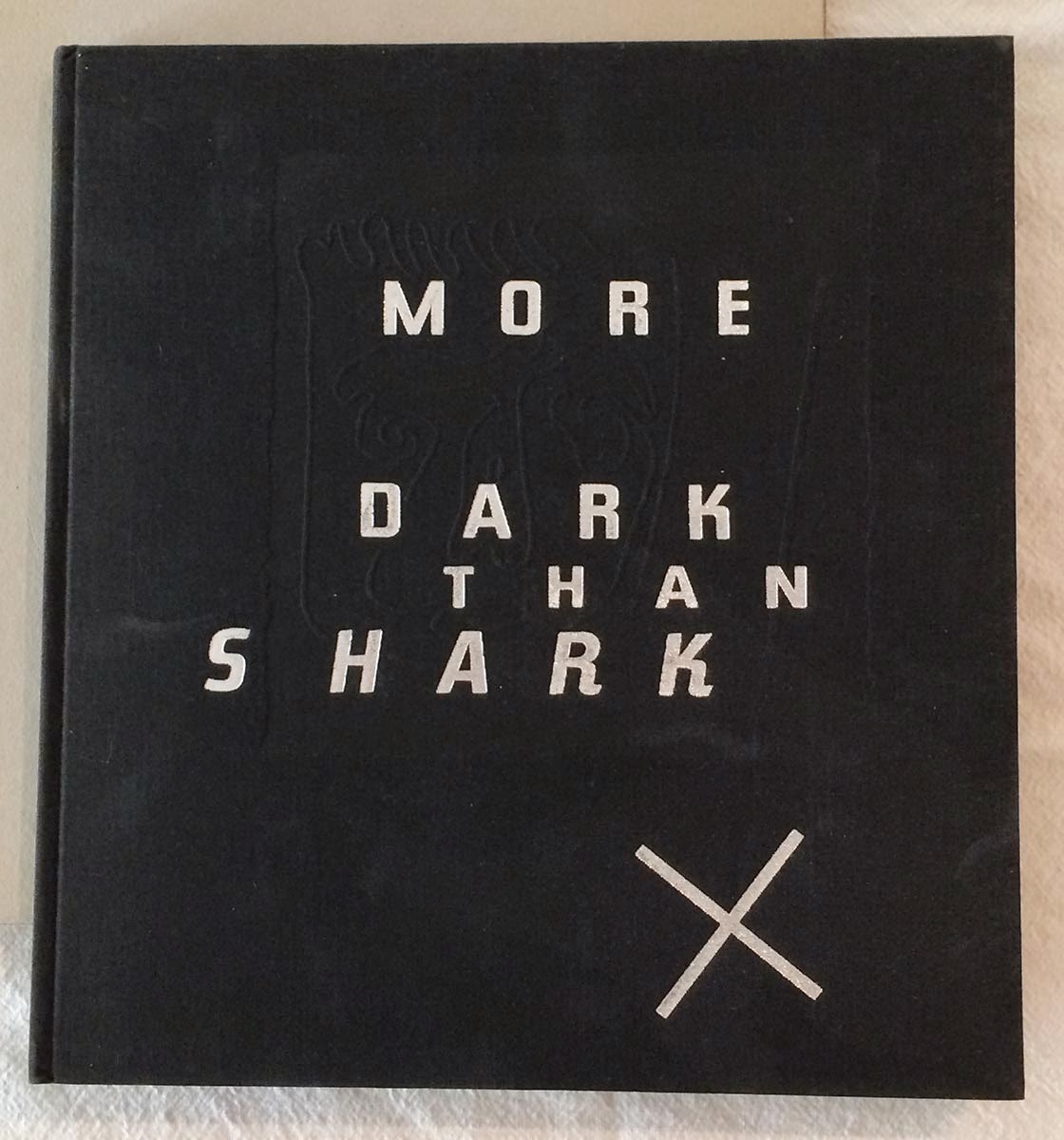 The softcover features a stunning wrap incorporating images by Mills; this wasn’t used anywhere in the hardcover, and it’s a shame and a loss. (If nothing else, it could have been used for the endpapers. The book was simply cased in black cloth, with the title stamped on the front board in white (a different design than that used for the paper wrap on my softcover copy.) It’s a perfectly serviceable trade case binding, but nothing special. The book comes in a heavy kraft paper slipcase, with the title stamp repeated on the front. 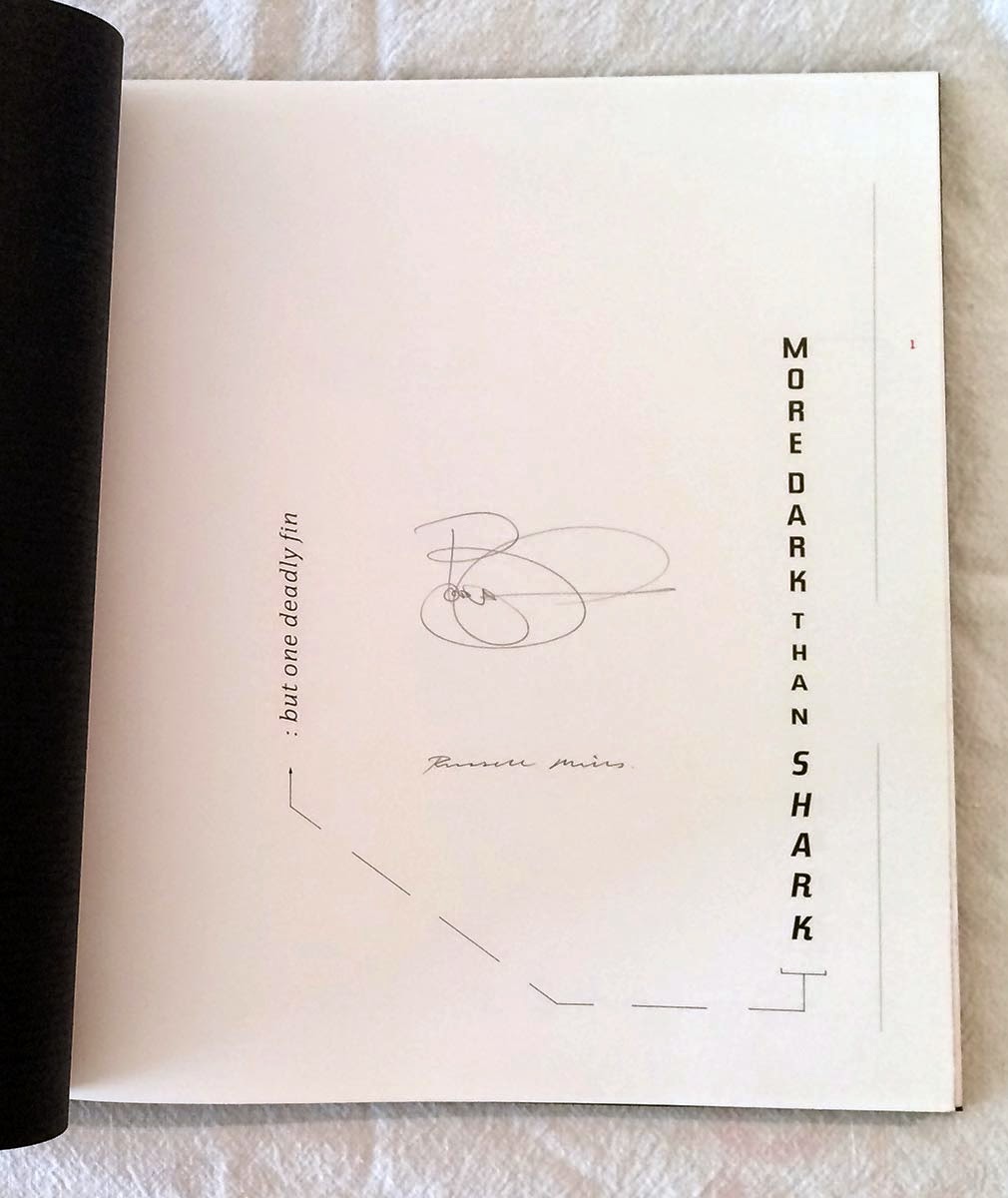 The signatures of Eno and Mills appear on the half title page, but there is no colophon, limitation statement, or other indication that the book is a limited edition. There is a slip of paper laid in, identifying the book as a Faber limited edition, and the spine of the slipcase has the number matching that of the print (i.e. from the edition of 150) pencilled in lightly at the top.

Perhaps most inexplicable is how Mill’s print was treated: The book is wrapped in a clear acetate jacket, and the print was simply sandwiched between the back board and the acetate! Worse even, it has to be turned sideways to fit, because its dimensions don’t match the book’s! 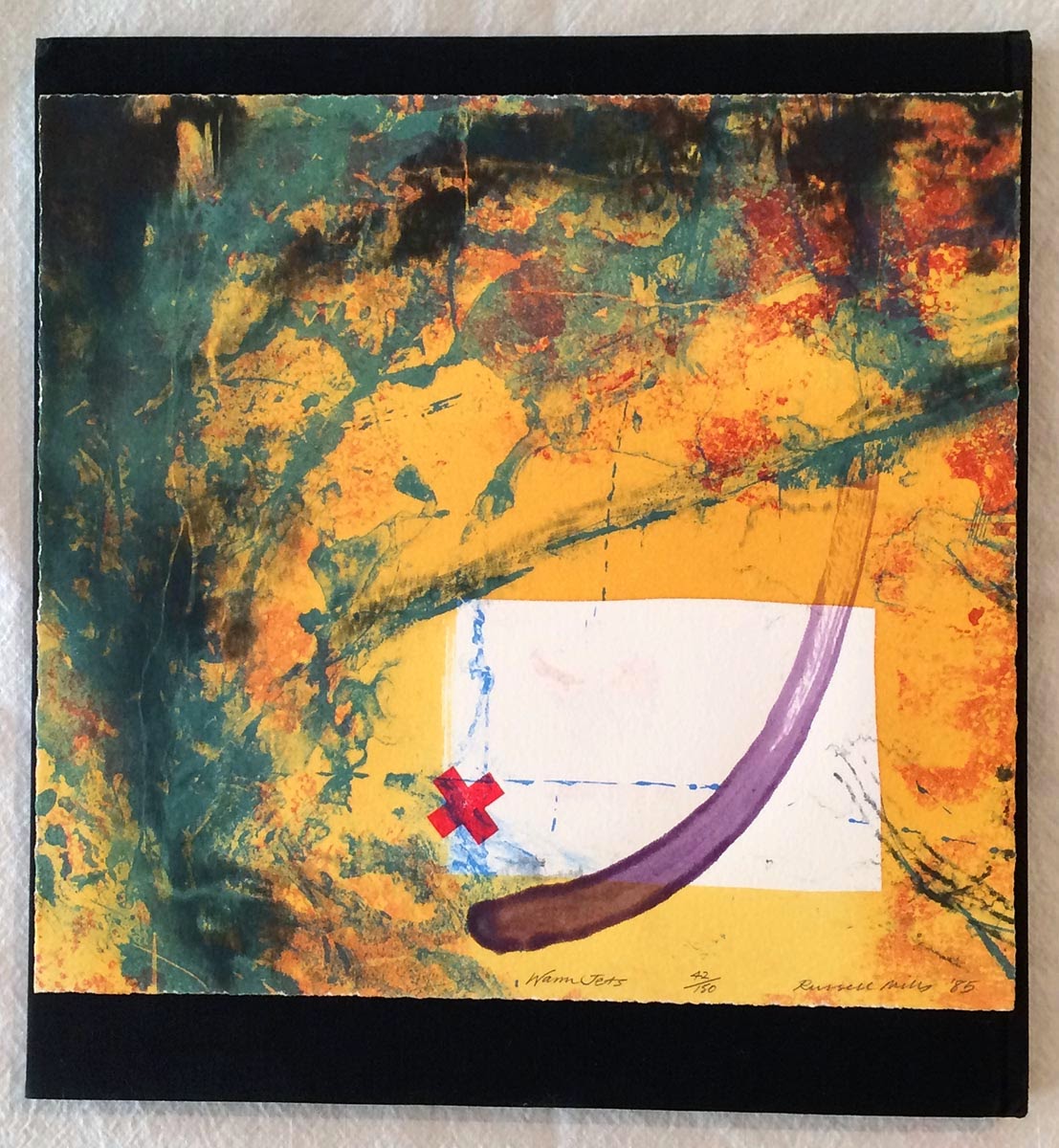 The intaglio print is titled “Warm Jets.” A bookseller’s description (for a copy no longer available) describes the print: “ 'Warm Jets' was printed at Curwen Studio, London from three plates on Curwen Special mould-made paper with additional hand coloring in amber wash ground watercolor, nail varnish overpainting, and rubber stamp by Harriet Hill and Russell Mills.” It has been torn right to the four edges of the image, leaving no plate mark or border. I wondered if it was a piece of a larger print, torn down to make smaller ones; the abstract nature of the image, plus the addition of elements by hand to each print, would lend itself to subdivision, but this probably was not the case. Nonetheless, the print should have been done on a sheet of appropriate dimensions for the book, and been bound in (e.g. as a frontis). 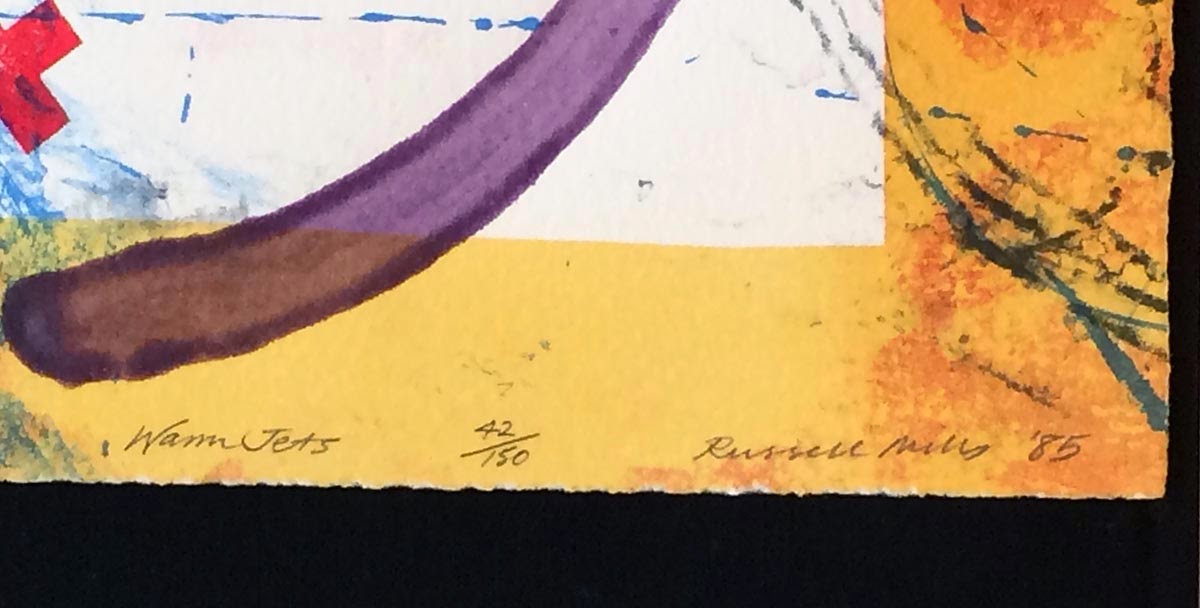 Unlike the softcover issue, which benefited from a cohesive design and direction from cover to cover, the limited edition hardcover seems to have been the result of a series of decisions that did not take each other into account. This is usually what happens when trade publisher’s issue a limited edition: it’s an afterthought, & generally just a slightly more elaborate package for the author’s signature, nothing more. But it can be more, without a lot of extra work or expense - just some creative thought. 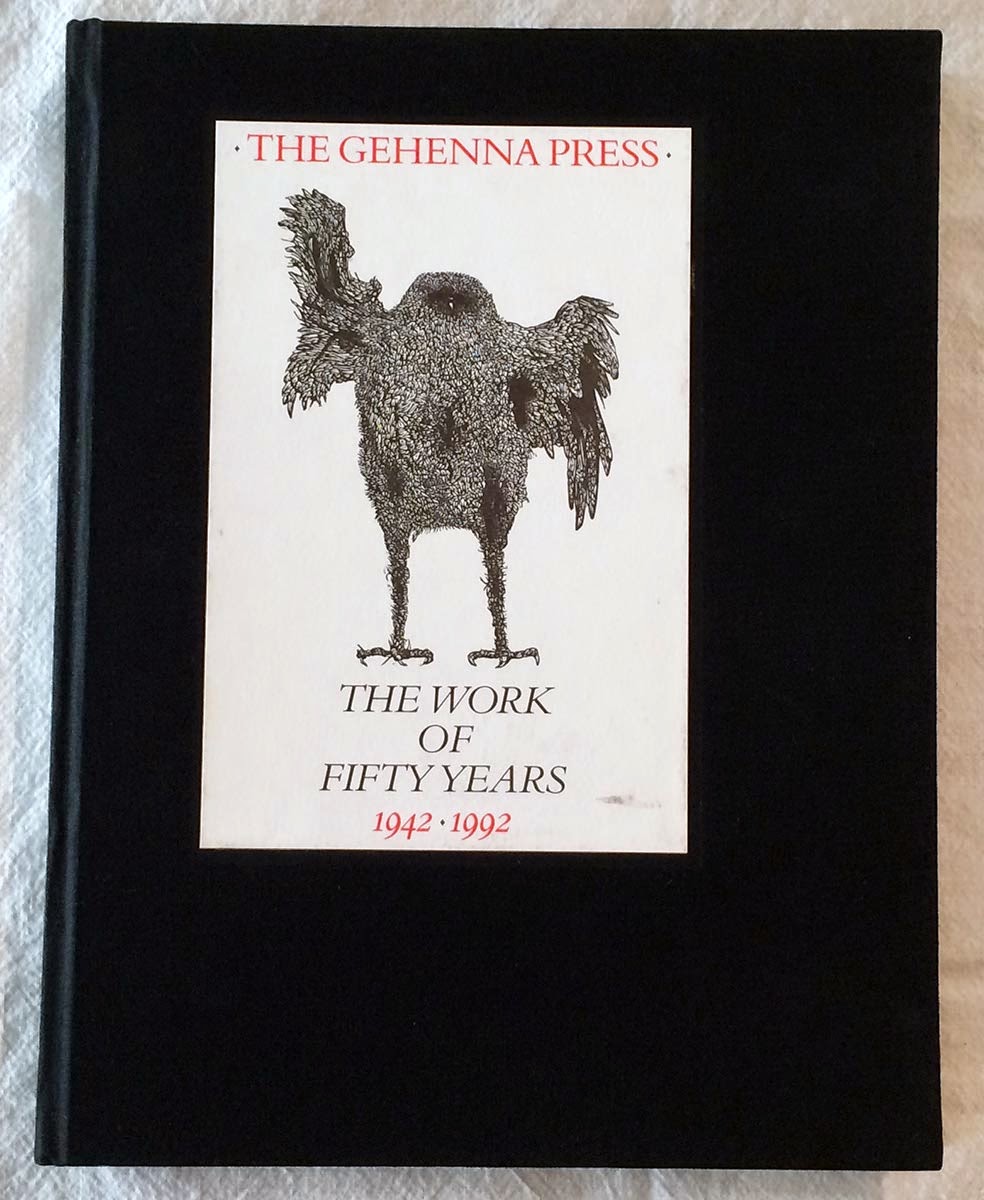 Reaching for the nearest example, take the deluxe issue of The Gehenna Press - The Work of Fifty Years. This invaluable bibliography of Leonard Baskin’s imprint was published in collaboration with the Bridwell Library for a 1992 exhibition, in an edition of 2000 copies. Most of those were issued in wraps, but some were cased in black cloth. There also was a deluxe issue of 50 copies, signed & numbered by Baskin, but that’s the least interesting difference. 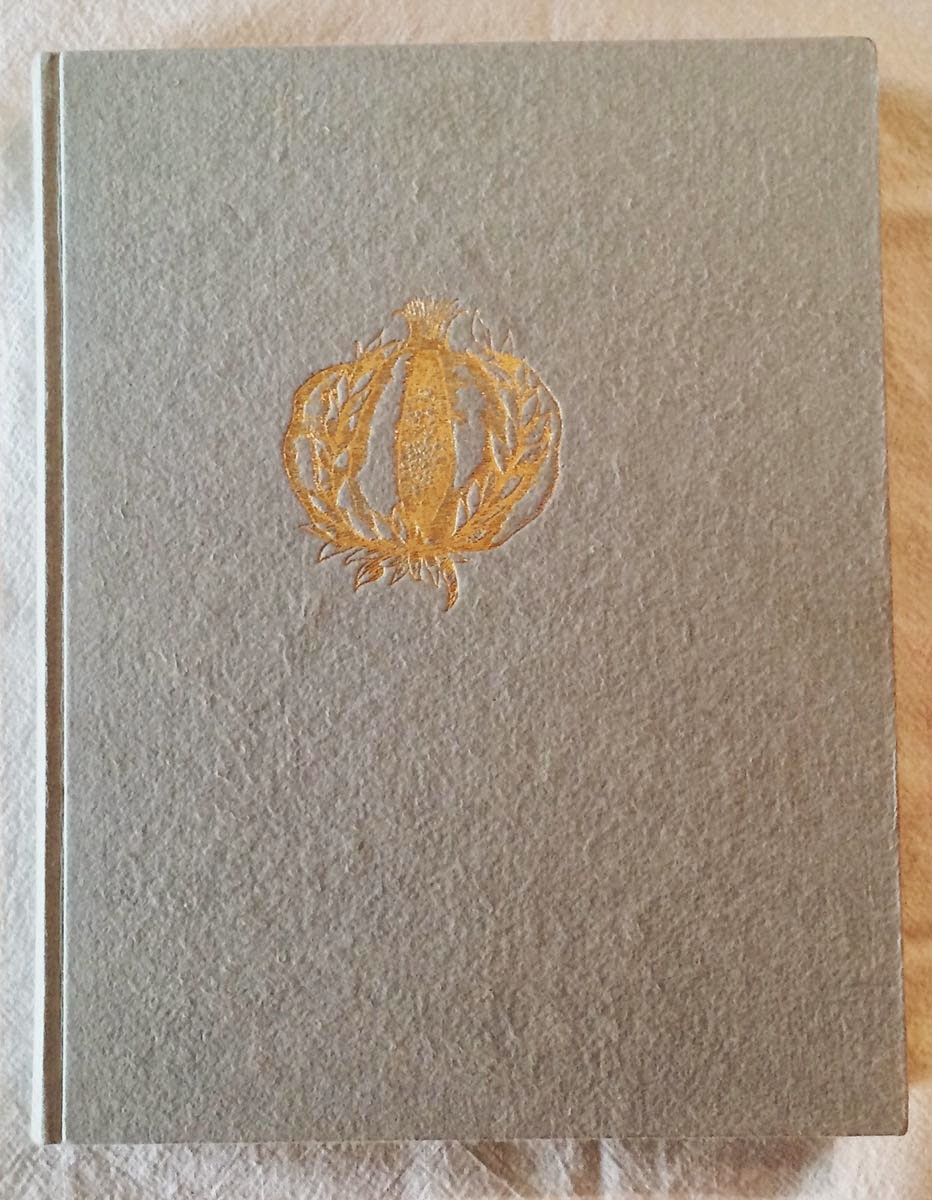 The deluxe copies were bound by David Bourbeau in a rough handmade paper, with simple gilt tooling on the front board and spine. The text block was sewn in a long-stitch format on a paper support, and opens beautifully flat. The pages were left untrimmed. 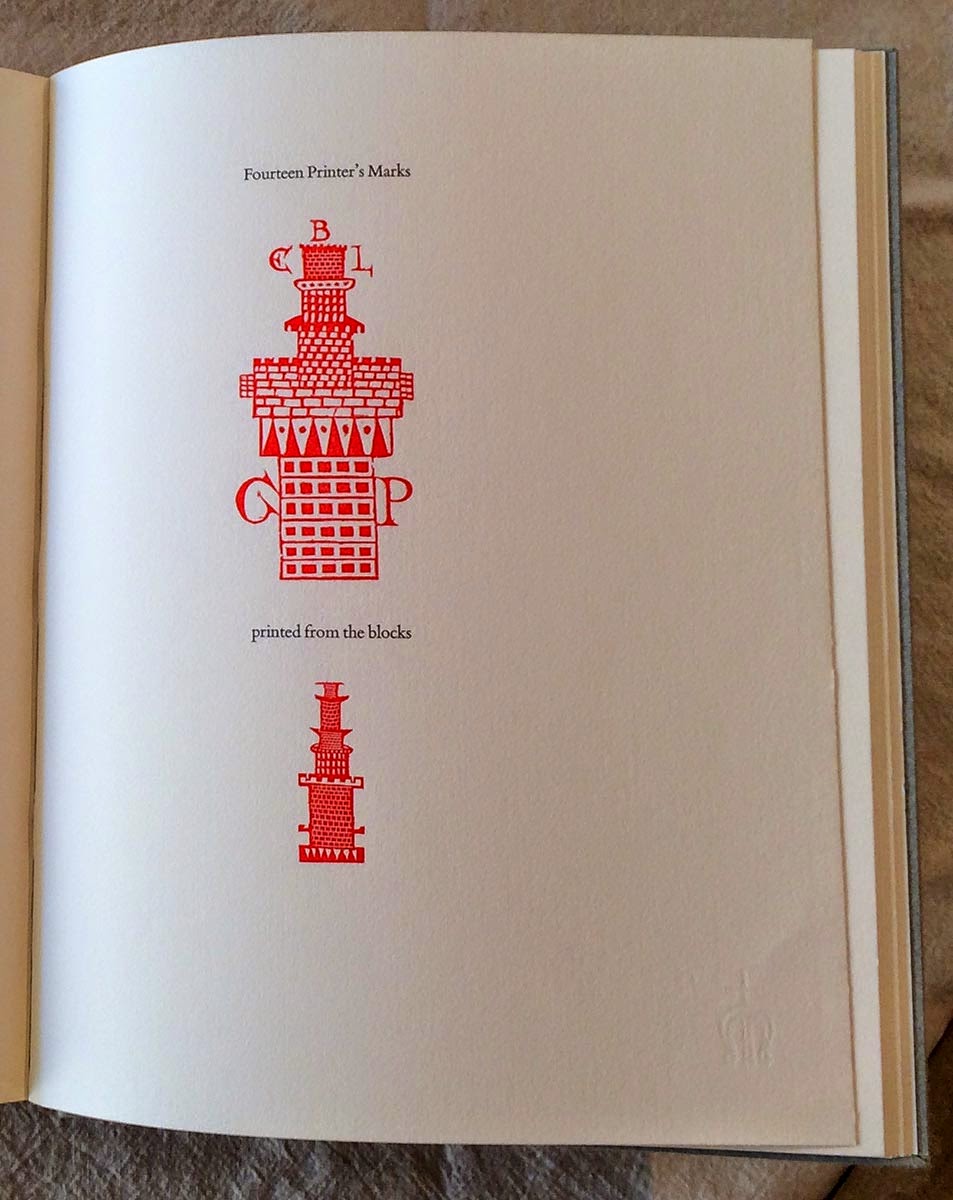 The book was expertly printed (offset*) by Oxbow Press, but these 50 copies include at the back an extra section of 14 pressmarks printed from the original blocks (i.e. letterpress) by Art Larson. Their absence from the main edition does not weaken its reference value; but their addition in the deluxe copies, especially being printed by long-time Baskin printer Larson, is an appropriate and pleasing extra for the collector. 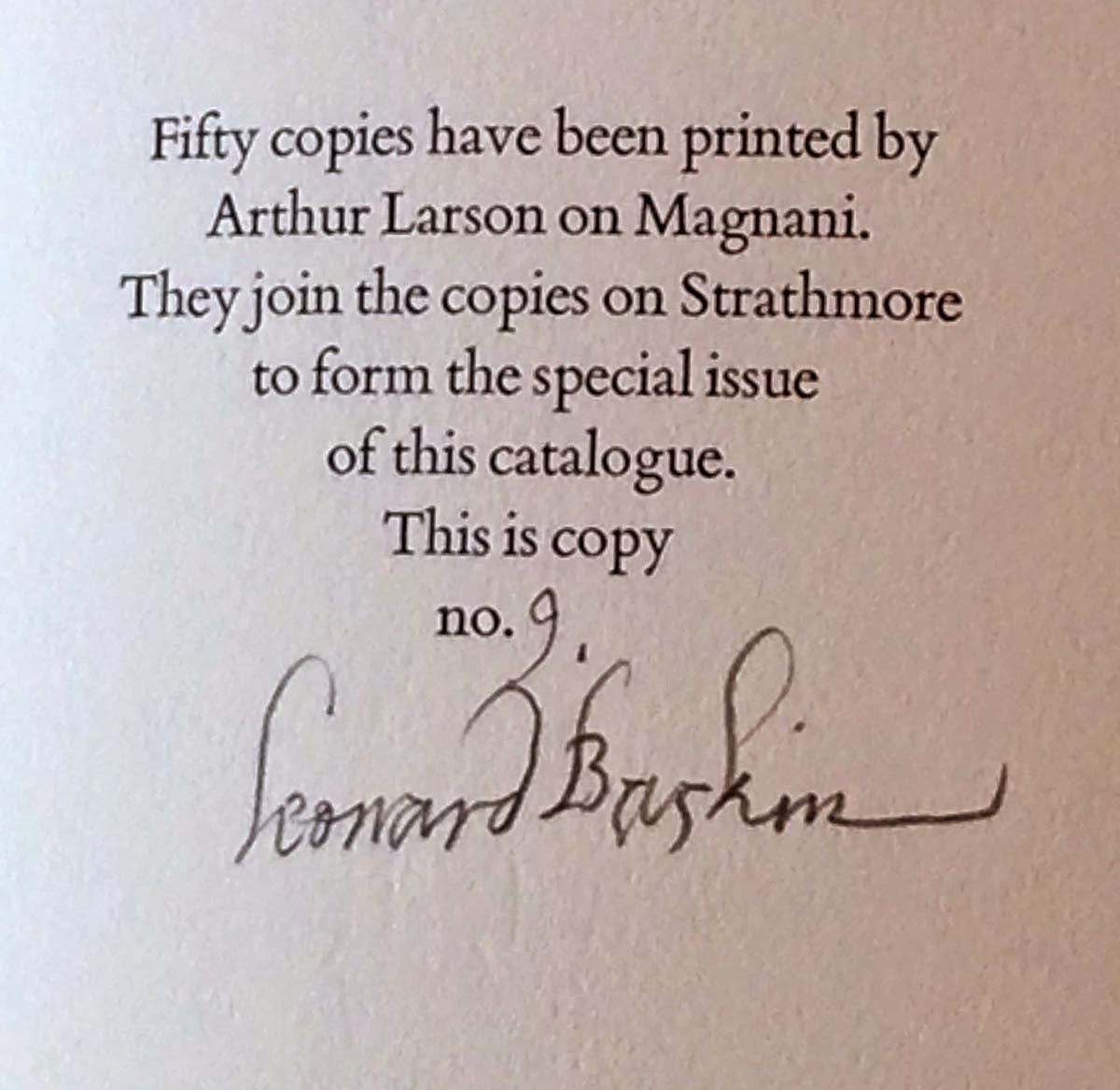 * Oxbow printed a number of projects for Baskin through the 1980s and '90s, including Hermaika (1986), featuring photo-litho reproductions of drawings. In The Work of Fifty Years, Baskin’s note about the project begins with the statement “…The prejudiced cognoscenti pronounce the gospel that no typographic excellence can be achieved by photo-lithographic means. This is utter nonsense…” and goes on to make a case for the process, particularly when it is the most appropriate for the job at hand (as it was for Hermaika) and performed by a skilled printer (as was Oxbow).

So, a plea to publishers who want to piggyback a “deluxe” issue on to a trade publication: make it more than a slightly better case binding with a signature inside. Take advantage of the additional design opportunities offered by the form. And don’t make it a Frankenstein’s monster, a collection of extra parts that don’t add up to a cohesive whole. All that aside, still happy to have the hardcover, if only so it can lie flat on the desk while being read. 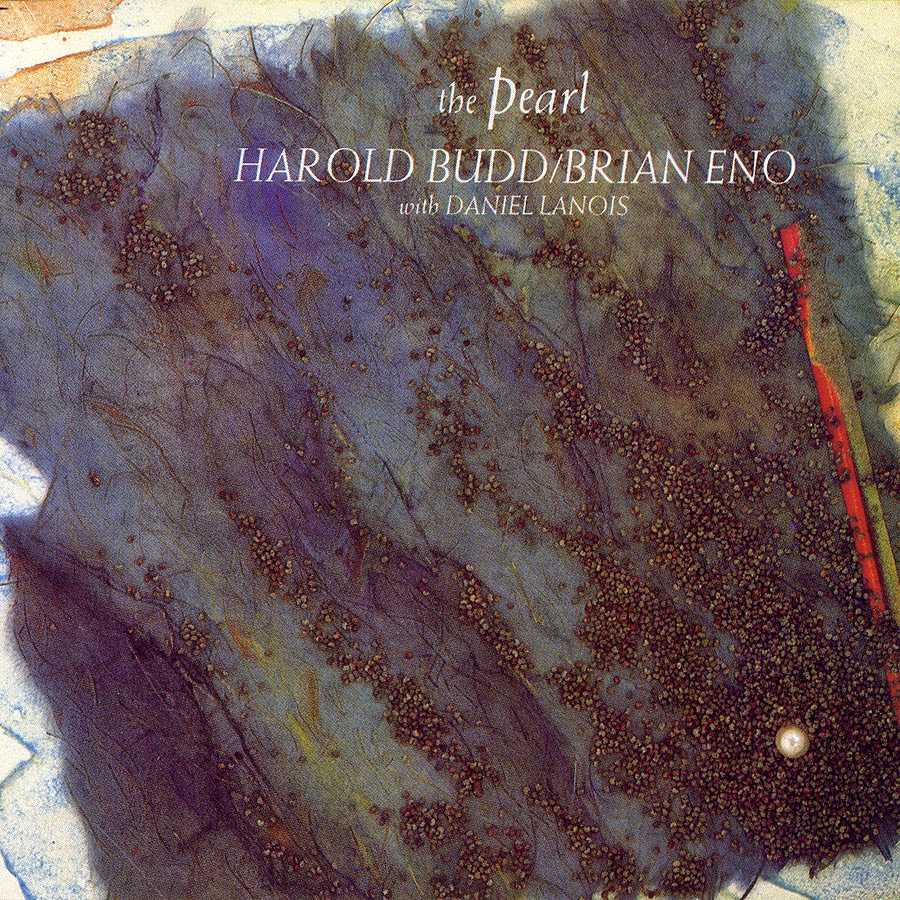 None of that has anything to do with HM, at least not directly. I’m gonna go put on The Pearl (cover art by Mills)...