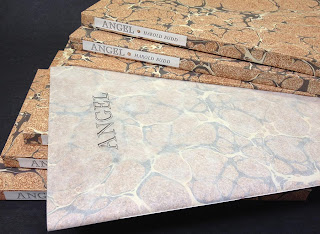 With the arrival of the slipcases this week, Angel, the new collection of poems by Harold Budd, is ready for publication. The poems were written over a period of 18 months, the last one after the death of the mother of Harold's son this past July. His poems have been described as the translations in verse of his music, combining wit, restraint, pathos and honesty. 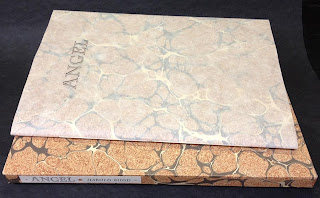 Harold's work does not want, nor would it benefit from typographic gymnastics.* Spare and simple are the criteria, with particular attention paid to his intentions with breaks and space (line and word). Typographically the biggest challenge was planning a book in which some poems were just a few lines, while others ran over two pages; and where some lines had just one word, and others ran on, unbroken. The text was set by hand in 18-pt Perpetua and 30-pt Monument, and printed on sheets of semi-opaque Barcham Green Bodleian paper in a single color. 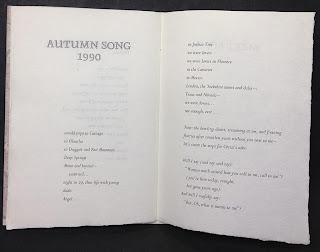 Because the Bodleian is such a thin sheet, the entire seven sheets comfortably made a single signature, which is sewn into a stiff printed wrap with a two-layered dust jacket: a sheet of hand-marbled paper is wrapped in semi-transparent Japanese tissue, upon on which the title has been printed. The book is presented in a slipcase covered in the same vintage marbled paper, with a spine label. 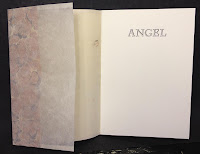 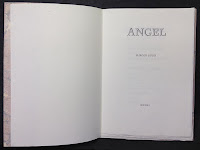 The quantity of Bodleian paper available restricted the edition to just 26 copies, which were press lettered A to Z and signed on the colophon by the author. Of these just 20 are offered for sale, priced at $450. 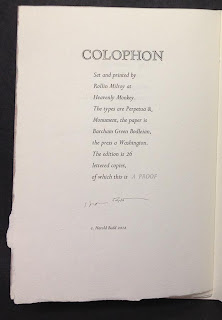 (* Just to see how things looked, Harold's poems were initially used to set trial pages for HM's upcoming book of typographic frolics, putting the various metal fonts in our cabinets to work. One of our favorite sketches was for this untitled poem from Angel: 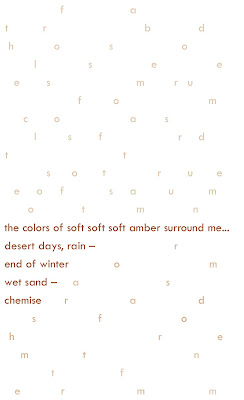 Look what showed up in this week's New Yorker! 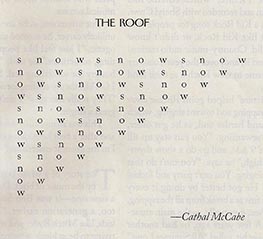 As we said, this kind of playfulness doesn't suit the poems in Angel. But one poem that was cut from the book, "The Desert Tramp," will be included, with typographic flourishes, in a collection of miscellany HM will be printing for issue at Codex next spring.)