Sea This Article About Printing Damp 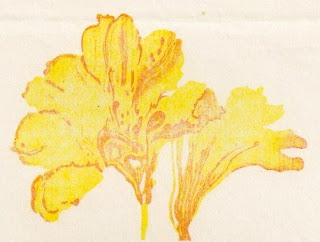 Stumbled across an article on printing damp in an early (1986) issue of Hand Papermaking. It's titled On Damp Printing, by Suzanne Ferris and Neal Bonham. They'd been students of Walter Hamady's during the 1970s, at the University of Wisconsin, who moved to Seattle and started the Sea Pen Press and Paper Mill. In addition to making paper, they published books printed on their own paper.

The article offers a brief description of the blotter method for damping. Of more interest, however, is the article's discussion of making paper to be printed damp: considerations relating to materials and processing.

After establishing a process for achieving consistency in damping, the biggest problem the authors report in the article is accuracy in registration due to the variation in expansion from sheet to sheet. This was a problem for them because they were printing on a Vandercook, and had to align sheets along one of the edges. This is one of the great strengths of printing with a handpress, on points: registration is achieved from the center of a sheet outwards.

The only part of the article HM would disagree with is the authors' claim that handmade paper does not necessarily require damping to achieve the best results:

"The entire process [of printing damp] involves three times the work. This method should not be used simply as a dogmatic response to handmade paper, soft or hard, sized or unsized."

If the paper's hard (i.e., sized), then yes, it should be dampened. Otherwise it's a waste of good paper. That's not dogma, it's just common sense. 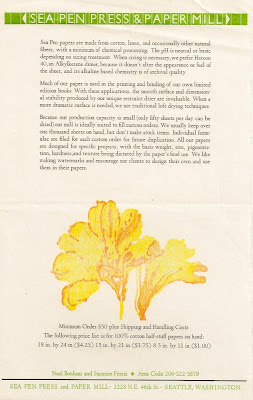 Hand Papermaking ran an interview with Bonham in 1994, at which time Sea Pen was still operating. The press and mill closed some time before the end of the decade. Google shows nothing more current for Bonham. Ferris now lives in western Washington, working as a garden designer and botanical illustrator.

p.s. no news on the poor Washington's tympan. It's still with the doctor, being figured out.