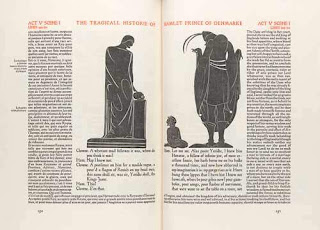 Been a long time since we added new content to the Handpress Library. Do you know of The Book as a Work of Art: The Cranach Press 1913 to 1931 ? Not many seem to, which is shame since it's one of the real jewels of publishing and design from the past decade or so. It was originally published in German in 2003; the edition we're talking about today is the expanded English edition of 2005. Only 400 copies were issued, and not only can one still be had for issue price ($290), they can be found for less than issue. This state of affairs will not persist.

The book was edited by John Dieter Brinks and includes a number of essays commissioned for this project, on various aspects of the press (esthetic, cultural and practical: there is a wealth of information about the economic realities of attempting to run a "private" press) and its founder, Count Harry Kessler. There also is a section with articles about and reviews of the press's work written during or shortly after its life. (See Oak Knoll's listing for the book, which includes the complete table of contents.) Of particular note in this section, for today's purposes, is a long account of the press's operations by its pressman, Max Kopp, written in 1962. Appended to this account is his one-page description of the process for printing with the handpress at Cranach; click on the page below & it should be large enough to read through. Notice how they dampened & dried the paper. (And also their vellum...) 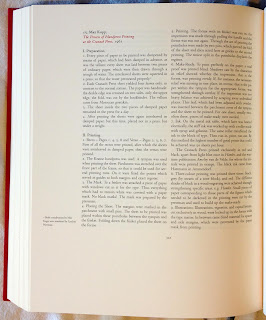 The press's most famous book probably is its edition of Hamlet, with contributions by Eric Gill and Edward Gordon Craig. Here's a concise description with some good images. 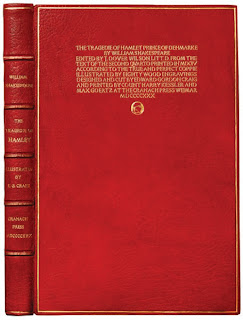 This book is essential for anyone interested in the 20th-century fine press movement, and good printing and design in general. Brinks has tracked down many unique copies of Cranach books in design bindings, and the color reproductions are impeccable. Visually, the book is equal to its topic and content. Too often that is not the case with books of this type.