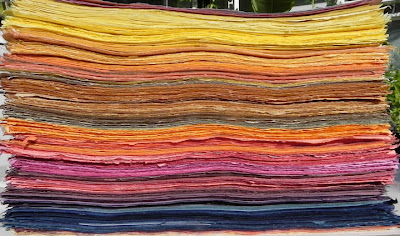 If you don't know those words, you will by this time next year. Over the last three weeks, as a slave to the colour vats, Barbara Hodgson has dipped more than 700 sheets of Reg Lissel's paper into a variety of natural dyes, including annatto, logwood, cochineal, cutch, henna, pomegranate, weld, brazilwood, madder, lac, woad and indigo. This venerable and intensive process gave her plenty of time to finally settle on the title for the fourth and last book in the colour series: Around the World in Colour: A Multi-Hued Tour of Ochres, Oxides, Roots and Bugs.

Although Barbara admits to being loathe to disperse the stack, each copy of the book will include a sampling of these sheets, both full page and smaller swatches, to illustrate the richness of traditional colours found in regions such as Southeast Asia, the Near East and Central America.

The writing is mostly completed and she's focusing on the layout now. (Claudia, as binder, has the unenviable position of always being last in the production line, so she's still finishing up copies of their last project, Cutting Paper, while Barbara forges ahead.) Printing will happen late this year & early next, with the book slated for publication in late spring of 2014.