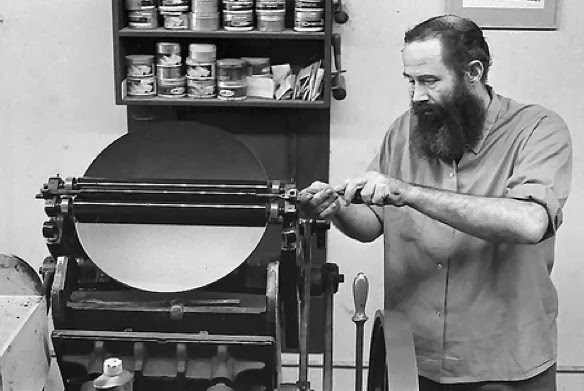 With no specific topic planned for today's post, I was just handed one, albeit with a sad undertone: former Vancouver printer Wil Hudson died earlier this month, at his home in Creston, B.C. For a time in the 1960s and early '70s, Wil arguably was The printer in Vancouver capable of letterpress printing worthy of the label "fine press."

The Creston Valley Advance has an obituary about Wil, with some biographical details. The Flickr link takes you to a collection of photos of Wil at work (but don't click on the link to his "final letter to the editor" - it takes you to a BS subscription page). 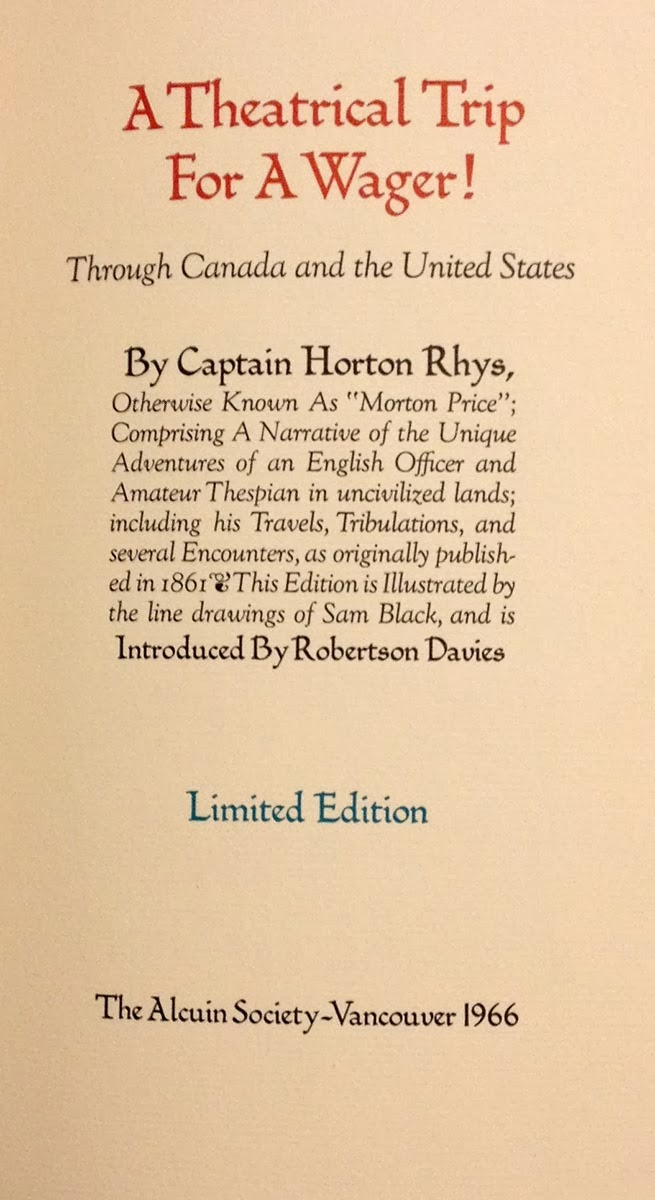 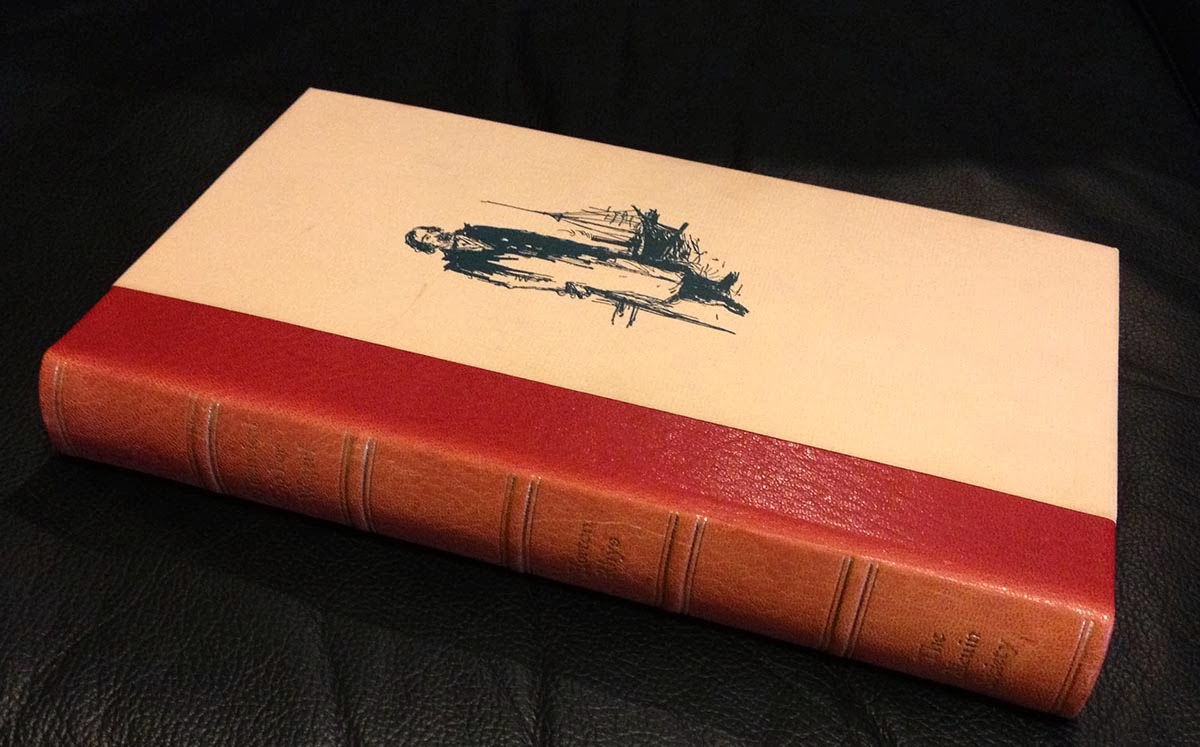 Anyone interested in the history of printing in Vancouver (all three of us!) or fine press printing in Canada (a couple more) will know Wil's name. The Alcuin Society, which is Canada's only national bibliophile group, was created in 1965 by a handful of Vancouver collectors primarily as an excuse to come up with interesting printing projects for Wil. The Society was modelled after the Book Club of California, and in the first five years of its life issued a number of B.C.-related historical reprints as "fine press" limited editions, all printed by Wil. (The editions always were too large, and the execution too commercial in materials and design, but the intentions were pure and Wil's skill at the press never in question.) 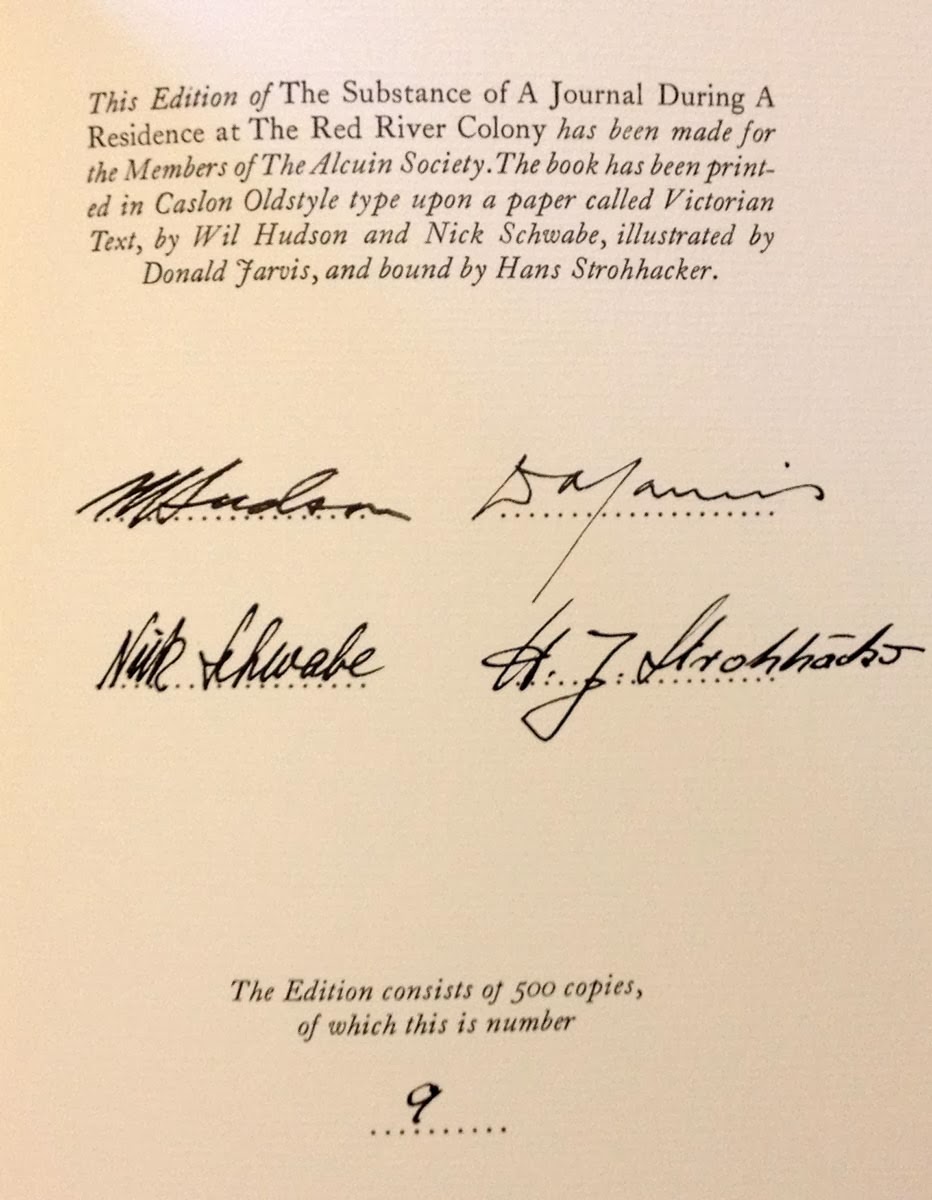 One of the Alcuin founders was Basil Stuart-Stubbs, the University of British Columbia's first Head of Special Collections. He and Wil collaborated on a number of small publications issued through the library (like the Eric Gill item below), and Wil also printed more mundane items, like letterhead. 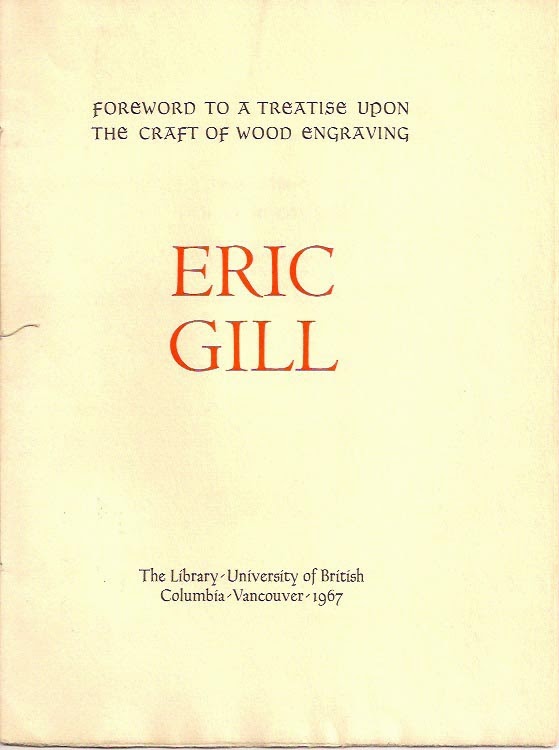 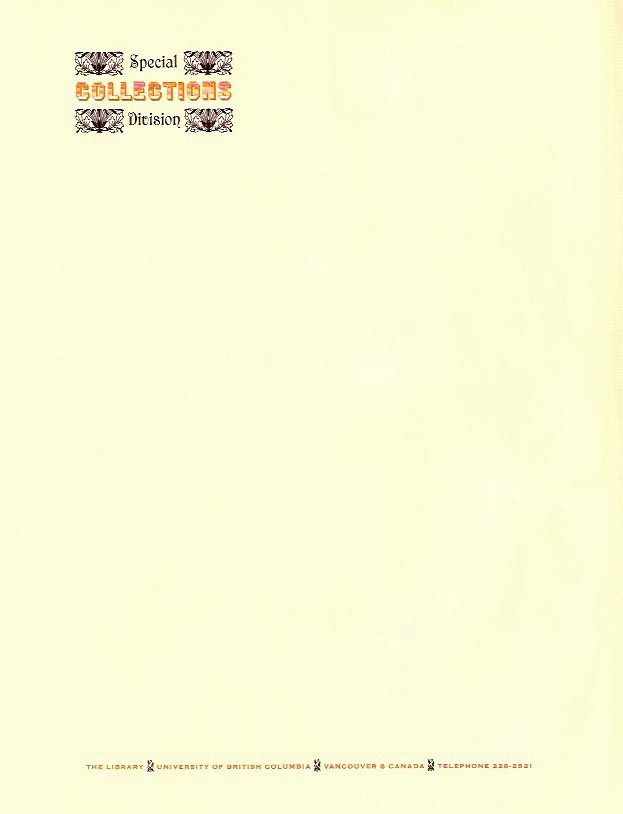 Not sure about this Samuel Johnson broadside, but I'd bet it also was funded, or at least initiated by BS-S/UBC. 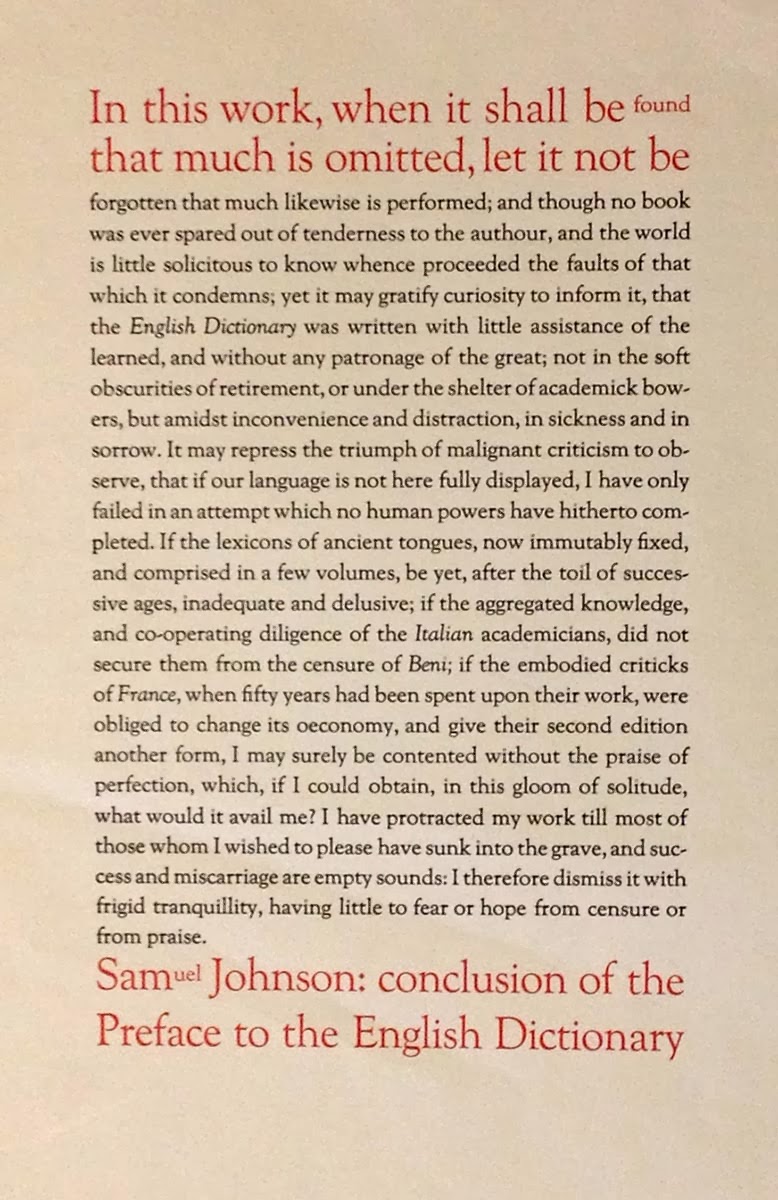 The earliest sample of Wil's printing I've found is a 1964 pamphlet publication of Bertolt Brecht's poem "To Posterity;" a "limited edition of 125 impressions," with the imprint "Printed at Grouse Mountain' (one of the mountains in North Vancouver). I've found no other publications using this imprint. 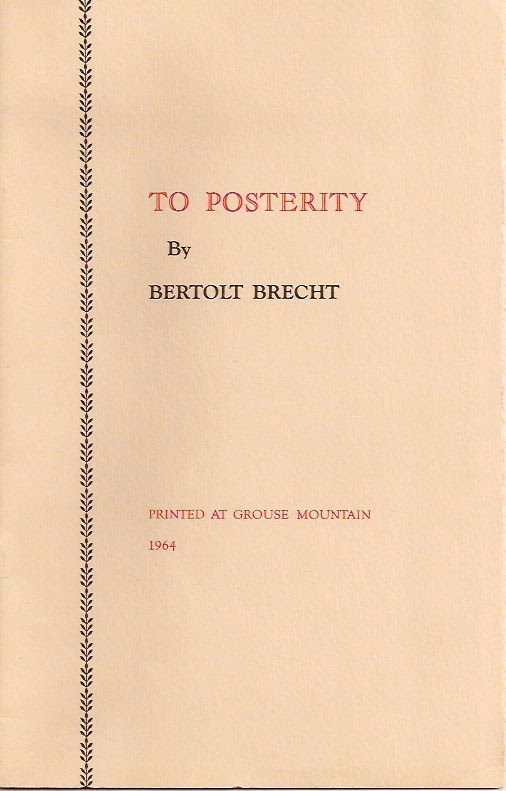 This lovely four-page pamphlet (250 numbered copies) from 1966 probably was done, at least ostensibly, to advertise his printing prowess, but it also illustrates his interest in being more than a job printer. (p.s. there's one copy of this title listed on Abebooks...) 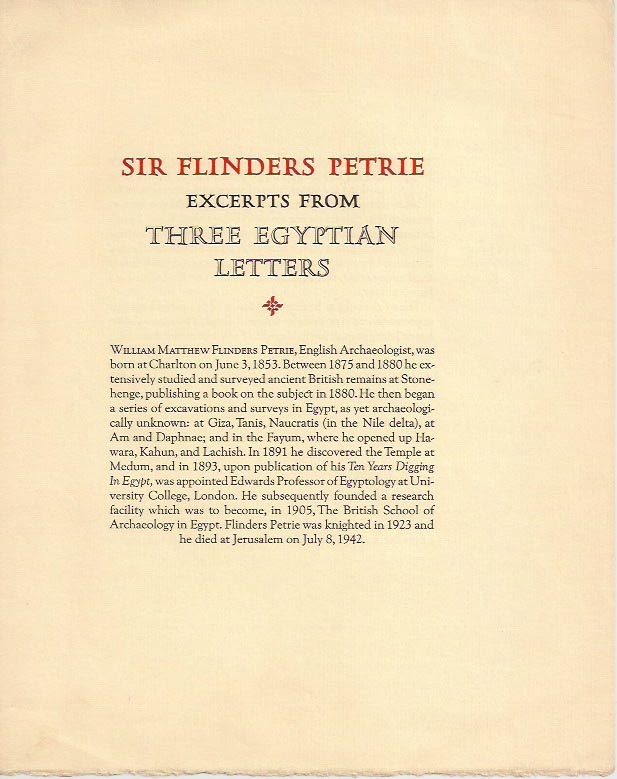 Robert Reid's early books led me to explore other letterpress printers who had worked in Vancouver. It's a short list and Wil's name came up often. Aside from the books and ephemera he did for the Alcuin Society, examples of his non-commercial printing are not easily found, especially examples printed after he left Vancouver for the north. 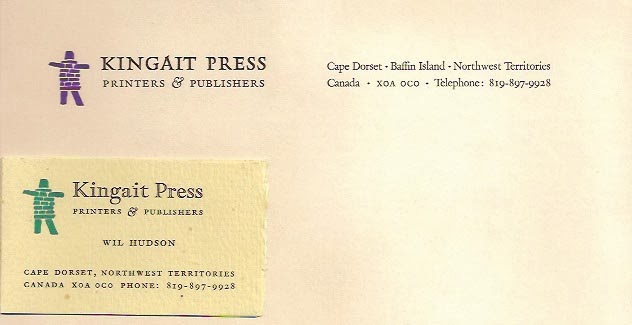 The federal government had launched a project to promote and develop the work of Inuit artists, particularly by introducing them to printmaking techniques. Wil was recruited to be the master printer/instructor at what became Kingait Press &Studio in Cape Dorset. The Creston paper's obituary says he was in Baffin Island in the 1960s, but I thought he went up around 1974 or '75, and stayed for only a few years.

When I first went into David Clifford's shop (Black Stone Press) in the late '90s, he had a Little Giant cylinder press taking up too much space in his shop. He adopted it a few years earlier, to save it from the scrap heap, in part because of its history: the press (which weighed a few tons) had been taken up to Baffin Island by (or at least with) Wil, to be used at the studio. Some letterpress printing was accomplished by him there, but it didn't really take off. After Wil left, somehow & for some reason, the press was shipped back to Vancouver. Must have cost a fortune. Before it reached David, I think it spent some time lying inert at Barbarian Press. Ultimately, to no one's satisfaction but everyone's understanding, it ended up being broken up for parts. Not positive, but I think it's the same press as the one shown here, from his Vancouver studio c.1970. 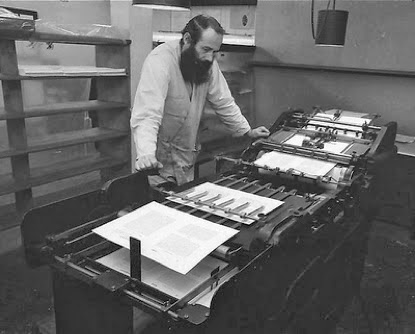 I am frequently surprised to encounter people who claim to be book collectors, yet they have no working relationships with booksellers. They have no appreciation for the profession. Here's one reason you want to get chummy with some booksellers: once they know (& hopefully like) you, all kinds of surprising things begin to emerge from boxes and secret stashes. It seems that while he was up north, Wil did some "job" printing for the studio and local groups (be interesting to know more about the Inuktitut type)... 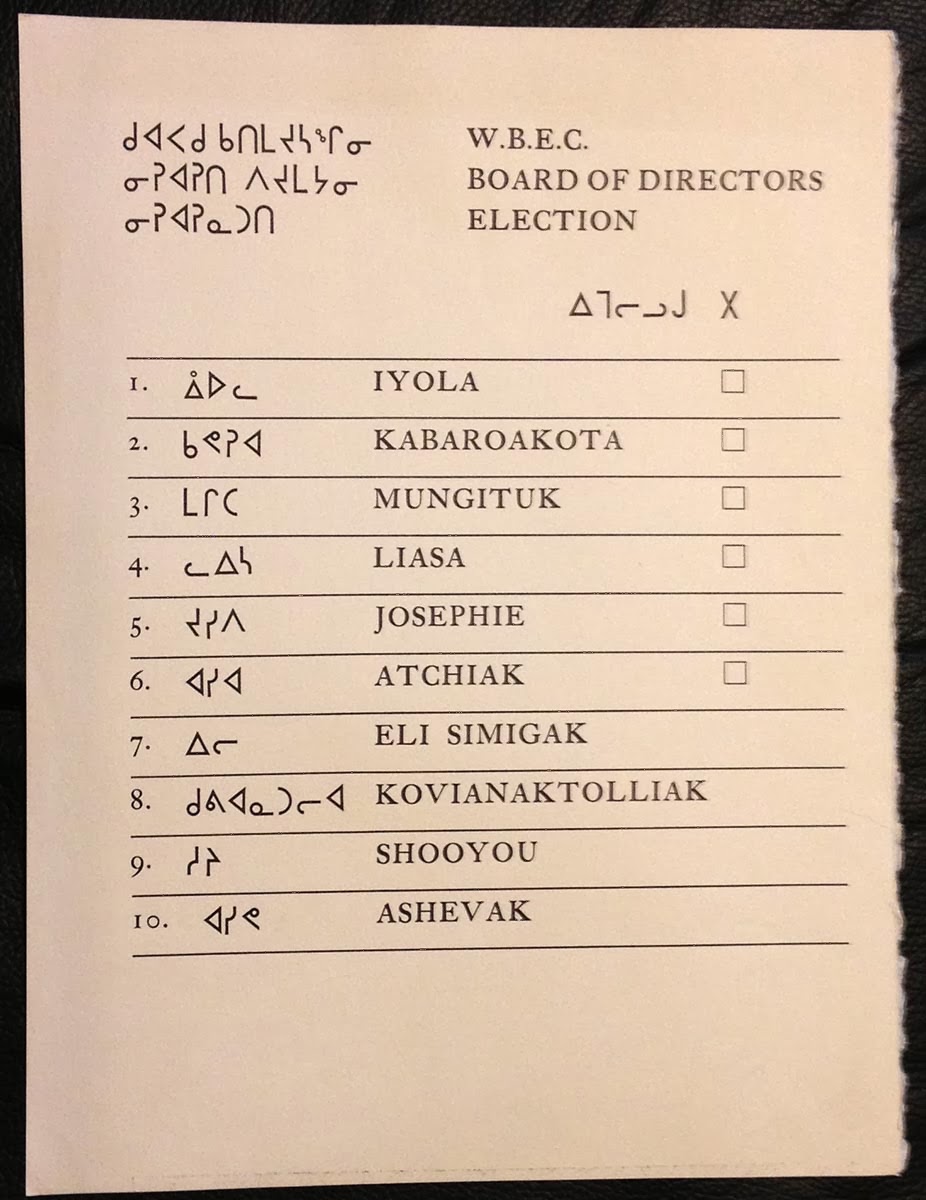 ...as well as a few items for his own amusement, including another edition of Three Egyptian Letters... 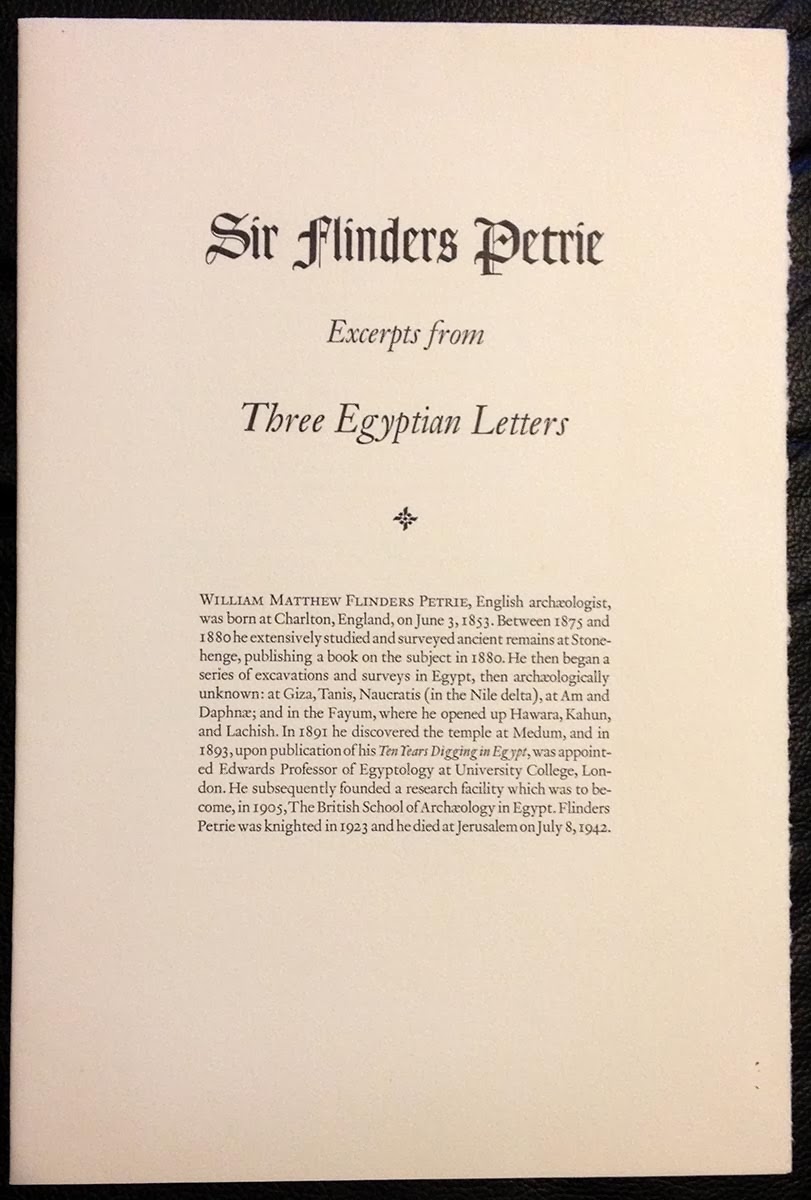 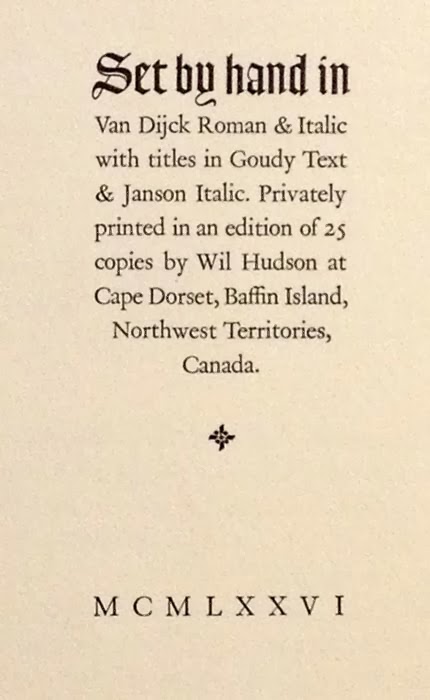 ...and the year before, C.P. Cavafy's poem "The God Abandons Antony" printed in an edition of just six copies. 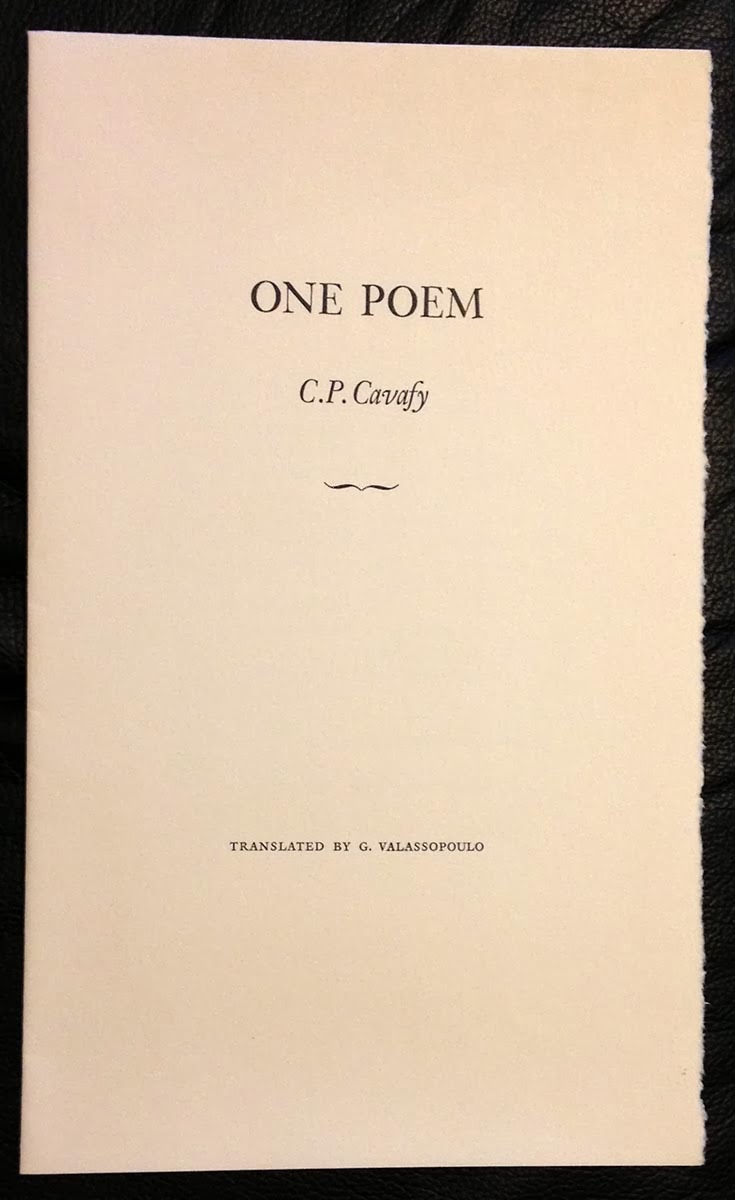 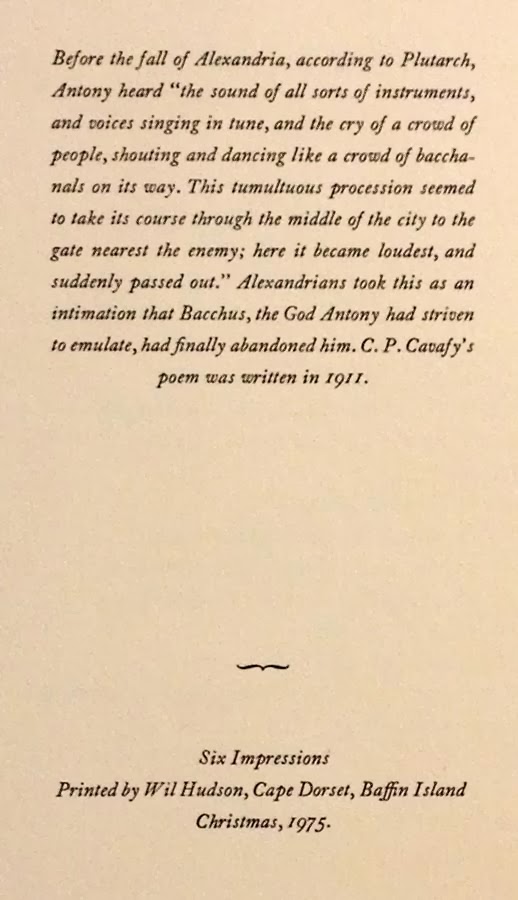 Leslie Boyd Ryan's Cape Dorset Prints is one of the standard histories of printmaking in Cape Dorset. Interesting that Kingait gets an extra N from the letterhead & card Wil printed.

Perhaps the most personal example of Wil's printing I have is the one below, from 1986 - the last date I have on any of his printing. It's printed french-fold, four pages. 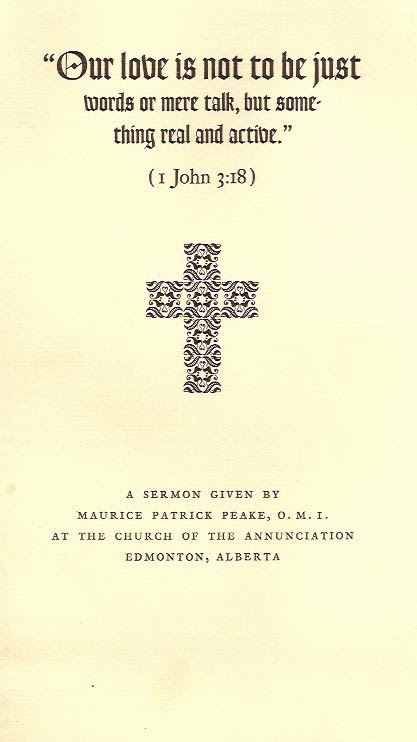 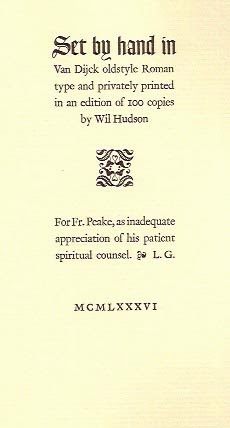 From the obit, it sounds like Wil found other passions to channel his creativity after withdrawing from printing. A loss, but one of the kool things about printing is that people who knew you are left with words to remind them of your company, and people who never knew you (as I never met Wil) have the opportunity to imagine they did. 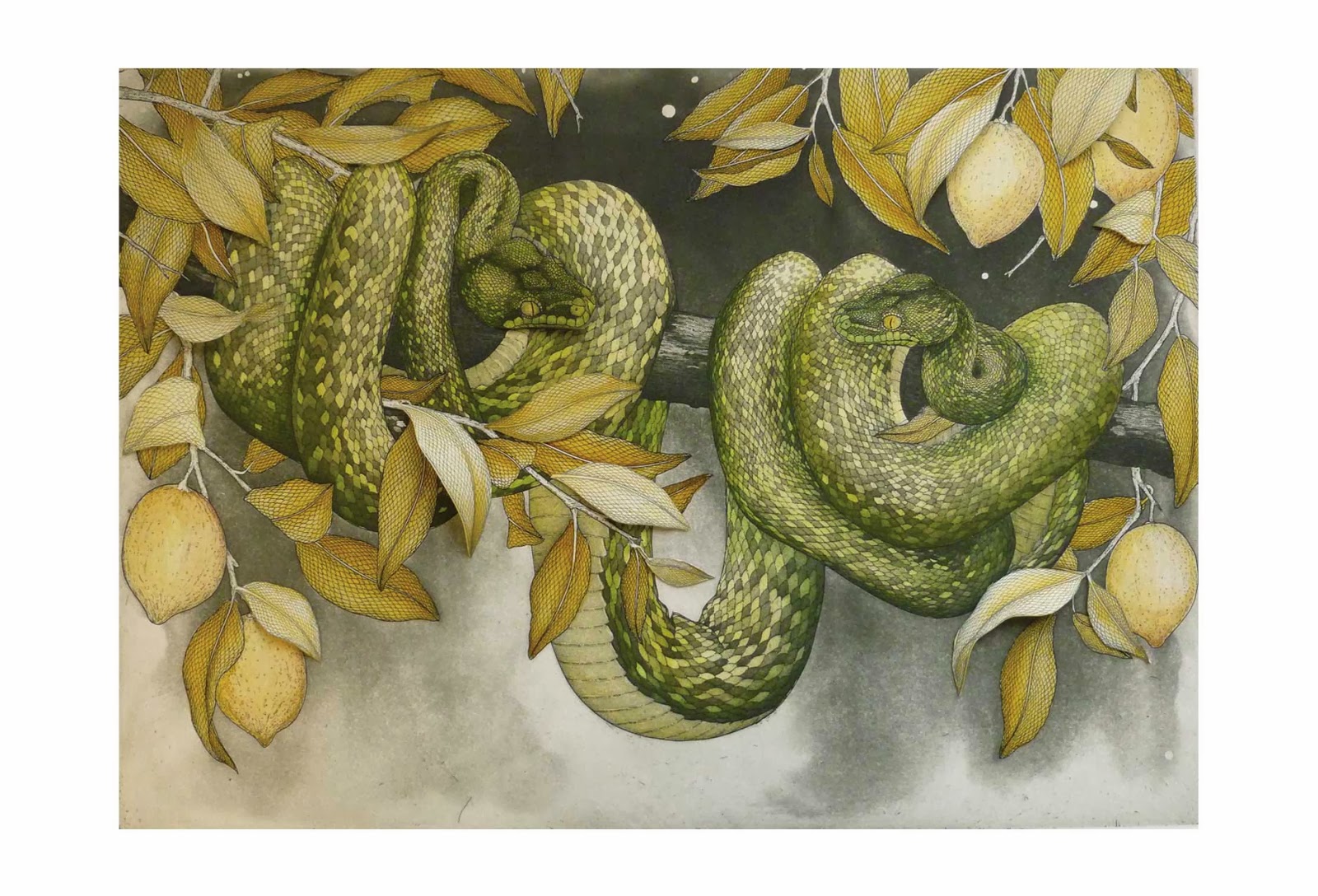 You will never, ever have a better reason for visiting Milwaukee than you do now: HM alumna Briony Morrow-Cribbs has a solo show of new works opening in a week at the Tory Folliard Gallery. Opening is Saturday 8 February. Briony's stuff is superkool. Might HM do another book with her one day? We keeping bugging her about it... 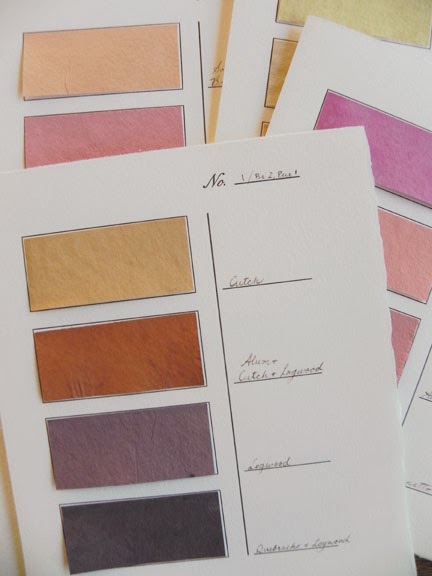 Things are happening with volume four in the color series, Around the World in Color. David Clifford is more than halfway through printing the text at Black Stone, and last week a fold-out map of the world, which will be colored to show where various natural dyes and pigments are found, was printed at HM - in fact, it's the last thing printed on the Washington before the studio gets taken apart in a month or so. 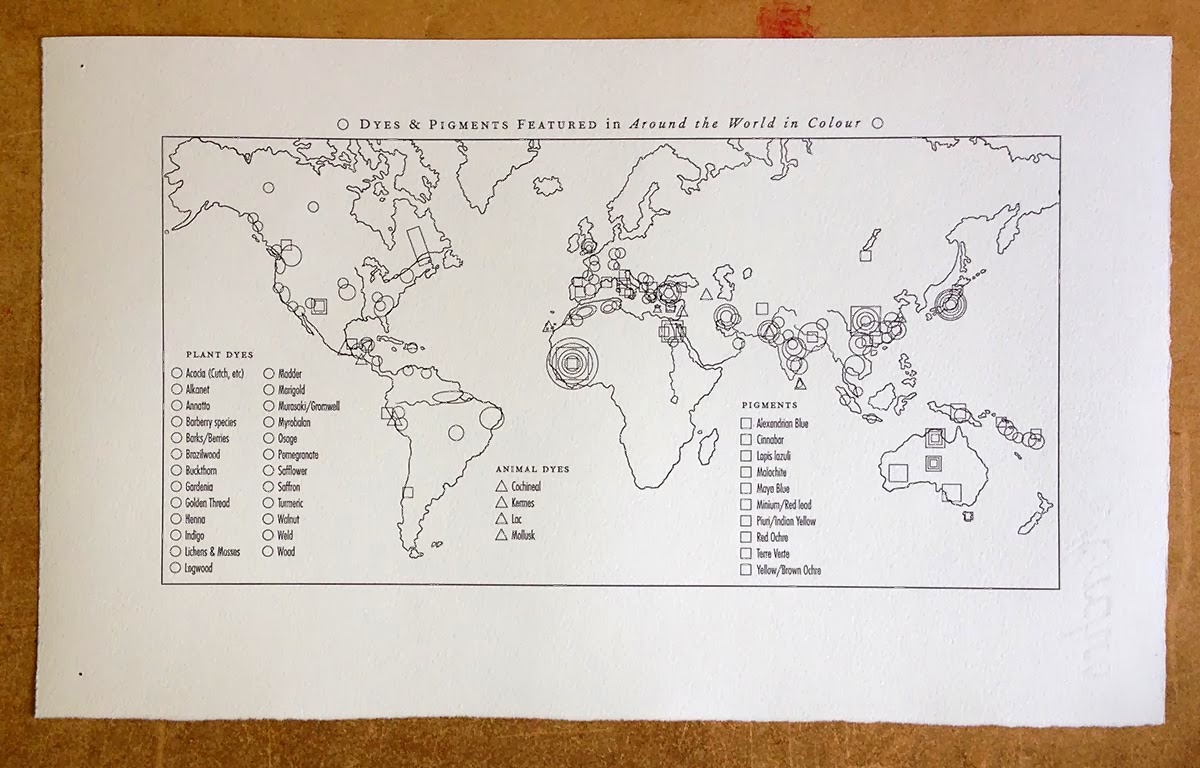