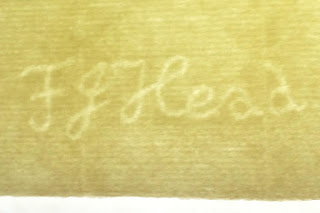 This week's post (below) mentions some difficulty getting the F.J. Head to dampen without cockling. As I suspected, increasing the number of sheets in the stack helped eliminate the problem. I also used thicker pulp boards, and really let the water soak in so there was almost no surface moisture. I then put the stack into the press immediately. The result was perfectly smooth & evenly dampened sheets (that's one below, on the tympan) that print beautifully. 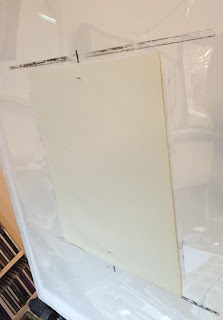 HM hasn't previously used either of the two papers we'll be printing on for XI LXIVmos - Somerset Book 115g (the white sheet above), and a very light (80 g?) F. J. Head laid (the cream sheet) that looks & feels like it was calendared. I didn't know how either paper would react when dampened, so I did a small test last week.

The book will be printed 16-up, four sections on each sheet (each section is eight pages). The sheets we'll be printing on are approximately 10 x 12 inches, and they'll be trimmed down. 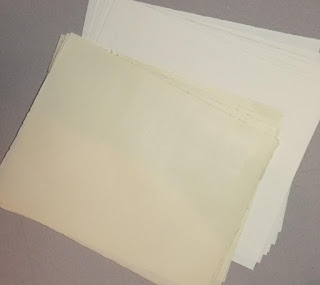 I use the classic method for damping described in Gabriel Rummonds' book: paper interleaved in groups between damp pulp boards. Damping and drying takes a lot of boards. I have a few hundred on hand. Treated well, they can last you a long time (at least four projects). I've standardized sizes as much as possible, to simplify handling. The boards are all 13 x 18 inches (big enough to accommodate Reg Lissel's standard foolscap sheet). I also have sheets of quarter-inch Plexiglass to aid in handling & bookend paper stacks while being pressed.

(I have a larger set of boards and plexi for the very odd project that exceeds these dimensions.)

The "tub" is simply a plastic storage box a bit bigger than the boards, filled with clean water. Each board is immersed in the water for a few seconds, removed & the surface water allowed to run back into the tub, and then stacked on a sheet of plexi. 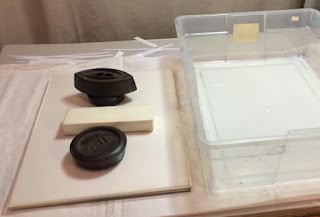 One of the tricks to damping is figuring out how many printing sheets to stack between each pair of boards. With Reg's paper, which was heavily sized, I settled on three sheets. I suspected the Somerset and Head papers would want more sheets per group, or they'd end up too damp. I settled on four sheets per group, just to see.

The boards are left in a stack, placed in a humidor (i.e. a thick plastic bag), and left under some weights. You need all the water to be absorbed into the boards. If any remains on the surface, you'll get cockling problems with your paper. I usually leave the boards for about an hour.

Damping: have your paper counted out into groups of appropriate number. Lay down one of your damp boards, place a group of paper on it (centered), lay another board on top, & repeat until all paper is in the stack. Place a sheet of plexi on top, put the whole thing in your humidor, place some medium weight on it, walk away. 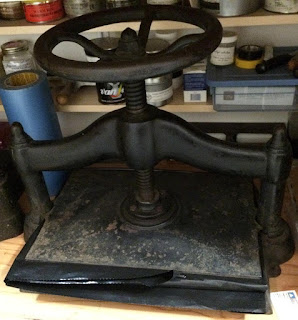 About two hours later, put the whole lot in a press & screw the platen down quite hard. Leave it overnight.

Before putting the test batch in the press, I had a peak: as I suspected, the Head was cockling a bit. There wasn't enough paper in the stack to accommodate the amount of hydration from the boards, and cockling is the result. I'll increase the stacks to six sheets and see how that helps. 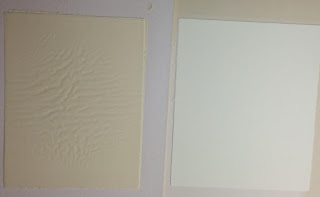 I used some raking light to show the cockling in this photo. It isn't actually as bad as it looks. Putting the sheets in the press overnight helped reduce it somewhat - nothing I'd have trouble printing on. And the cockles can be removed when the sheet is dried.

The Somerset, on the other hand, dampens like a dream, easy & flat. It'll be like printing on butter. 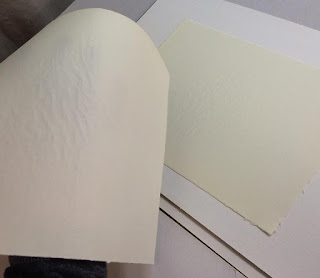 A properly dampened sheet isn't wet; it's cool to the touch & completely relaxed. You can see in this photo how the Head sheet drapes over my hand when held. The point of damping is to relax the paper's fibers, making it more receptive to impression and ink (i.e. less impression and ink is required compared to printing dry, giving you a crisper result). 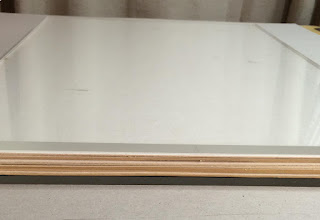 Drying is almost the same process in reverse. The sheets must be kept damp while being printed (in this case, over a period of two days). After the last run, each sheet is placed on a dry pulp board, and a stack is built up. When finished, the whole thing is put in the press, screwed down very tight, and left overnight. The next day the sheets are dry and perfectly flat (below). Then you have to all those boards before they can be used again... 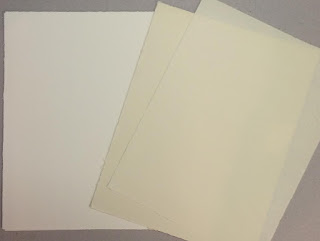 With that test completed, and the entire book set & ready, printing starts. Come back next week to see how we go. If there's no post, you'll know it wasn't good.