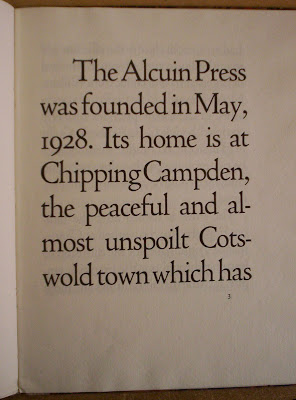 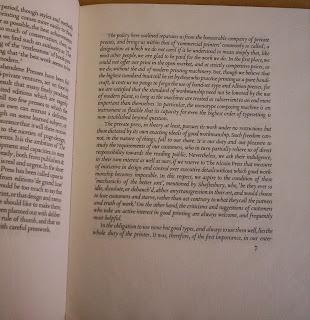 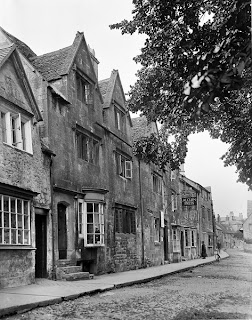 Printer Chris' Stern's legacy lives on! His former partner, Jules Faye, has sent out this notice with details for the planned opening of the C.C. Stern Type Foundry in Portland, OR. Chris and Jules published many interesting and innovative books during the 1990s and early '00s, before his untimely death. Great to see all this equipment, and Jules' expertise, still at work. Note than in addition to soliciting cash donations for the foundation's start-up and ongoing costs, there is a "wish list" of equipment they need. 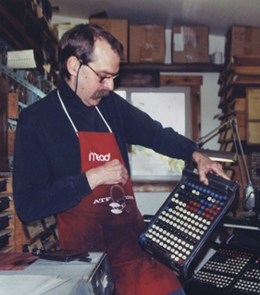 A (New) Letter from Edward Johnston

Received in the mail this week was a package full of surprises from The Aliquando Press. Will Rueter has issued a previously unpublished letter by calligrapher Edward Johnston, printed here in facsimile on a sheet of Barcham Green Medieval handmade paper. 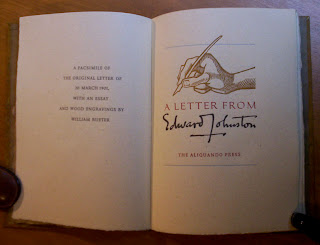 Will discovered the letter years ago at a book fair, tucked inside A.R. Ashbee's copy of Writing & Illuminating & Lettering - score! The bulk of the 27-page book is taken up with an insightful essay about Johnston, providing some context for the letter. And, there's an original two-color wood engraving portrait by Will of E.J. The collection of papers combined in the book alone make it a joy to leaf through: Nepalese for the case, Hahnemuhle Archive for the text, the BG (printed damp), and some kind of a gampi for the engraving. Another lovely publication from TAP, issued in an edition of just 40 copies. And it's priced at just $95! But Will's never charged enough for his books. 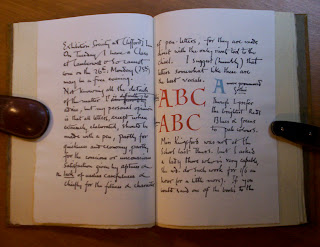 Also in the package was a copy of Will's ninth books, Poe's story The Cask of Amontillado, published in 1965 (just a few months after HM was born....). We admit to having been gently pestering Will about the possible existence of a copy for some time now, and finally wore him down: a note tucked into the copy that arrived reported that it certainly is the last copy. 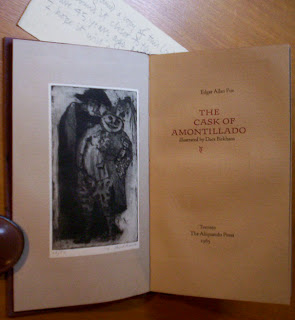 Perhaps Will had been reticent about sharing a copy of such an early work, as he was understandably still perfecting his presswork. But he shouldn't feel apologetic: one might niggle about the printing only if comparing it against what he later achieved, but the book itself shows the early blooms of taste and style that would come to characterize TAP's publications. 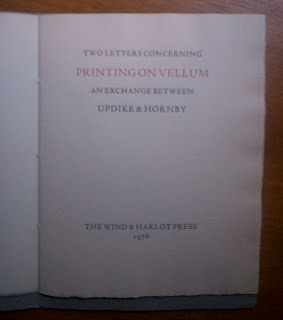 There were a few other recent additions to the HM library. Printing on vellum has long been an interest here, considered by many to be the pinnacle of challenges in handpress printing. Printing on Vellum is also the title of a small pamphlet reprinting an exchange of letters between Daniel Updike and C.H. St. John Hornby on the subject. The pamphlet is set in Centaur and printed damp on (unidentified) handmade paper, in an edition of 25 press-lettered copies. It is an immaculate little production, issued by the Wind & Harlot Press in 1976. An Internet search suggests that this was an early imprint of Bob Baris, but the e-mail link on his current Press on Scroll Road site is dead, so our inquiry remains unanswered. 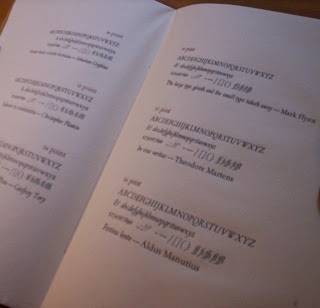 HM has never been reticent about expressing our admiration for the work of Gabriel Rummonds, or our regard for the man himself. But is the little pamphlet above, displaying 10-, 12- and 14-point Spectrum (roman and italic) on a single french-folded sheet, issued in an edition of 70 copies to celebrate Abe Lerner's birthday in 1978, really worth almost $1,000?! That's what the other copy listed on Abe was priced at when we ordered the one shown above, priced much, much, way much less.