Nothing Else to Do But Print... 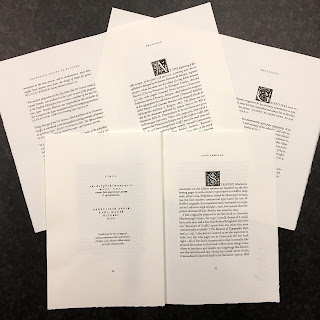 Last month's post turned out to be a little optimistic, in terms of how quickly the production wheels would start to turn. Sharing HM's publishing plans for 2020 would be based on the assumption that six months from now, there will be people (as there have been in the past) sufficiently interested & liquid to order the new books. Obviously everything in our near- and medium-future has changed, and in ways we don't even know. But since we don't know, and there's really nothing else to be done right now, I am going to continue with work as planned. Unlike 99% of people, my working life and routine have not been affected. For the next three months, that means printing Francesco Griffo da Bologna - Fragments & Glimpses.

It will be HM's longest book ever, 114 pages; 14 sections, 28 folios printed two up, 56 sides, each taking a day. I keep trying to do the math differently, hoping to come up with a small number for how long the printing will take, but it always comes back around three months. Self-isolation actually may help me make up for some lost time: my original plan had been two print Monday/Tuesday and Thursday/Friday (i.e. it takes two days to print both sides of a sheet, so two folios per week), but since every day is the same now, I'm just working two on, one off. Today (Wednesday 1 April, no fooling) is off.

I have drafted several iterations of the colophon in recent months, but will not actually set it until the rest of the book has been printed. My plan had been to issue the book's 58 numbered copies in three states: a few in a special binding, available only by advance subscription; 15 bound by Claudia in limp vellum; and the balance cased in decorated paper over boards. There would be some additional ephemeral material included in the first two states. I hadn't finalized issue prices when the crisis hit, but basically it was looking like the pricing ratios between the three states (in reverse order) would be x, 2x and >3x. 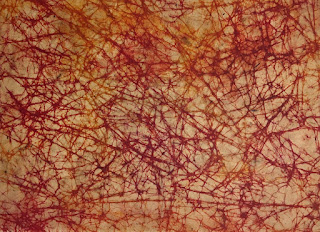 That was all fine a month ago, but I realize none of us are in a position to be making financial commitments like this for six months hence. I've already spent a year full-time on Griffo, plus prep work in the previous years; purchased all the materials (including the collection of Aldine leaves); and I'm locked in the house anyway, so I am simply going to proceed with printing the book as planned. When that work is done, hopefully before the end of June, we will see where things are at in the world, and I'll decide how to proceed with the binding(s). And so, printing Fragments & Glimpses is now underway. I started by doing a test sheet, two pairs of non-contiguous pages, just to set the color and get a feel for things. That was a good idea because I got overly complicated with the platen balance and makeready. The printing ended up looking like shite. So I put everything back to zero and proceeded, with much better results.

Meanwhile, I have just made an exciting addition to the Aldine reference library, which I hope will have arrived in time to share in next month's post...Steve Heaver's Hill Press has issued its first new book in several years, and I likewise look forward to sharing some images & details when my copy gets this far west and north...An odd (not catalogued anywhere) Lovecraft pamphlet has landed on my desk; I'll tell you what I'm able to find out about it later in the spring...Claudia & Barbara are working on their next book (which I have signed on to print - late fall 2020?), and it is going to be amazing, on par with The WunderCabinet... 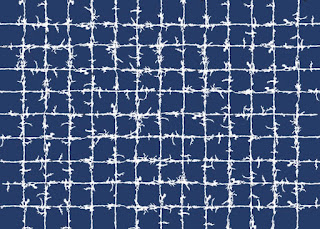