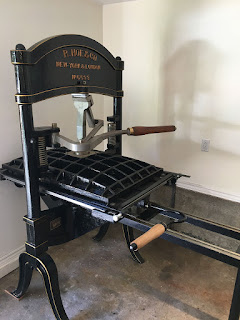 My friend Adrian Robertshaw lives on Vancouver Island. He's a man of many artistic and practical talents. About 15 years ago he caught the printing bug, and acquired a few presses. He had a Vandercook Universal II and a C&P which he rebuilt; the pair took up a large portion of his Vancouver loft when I first knew him. Life and family intervened for a while, but in recent years his presses have started clacking again. He has a lovely studio garage near Nanaimo that is open on summer Sundays for drop-ins (socially distanced). His earliest works were done under the imprint Strathcona Press, but he has rechristened his studio Introvert. In 2019 he published the pamphlet Poorly Printed, in an edition of 50 copies (* see below for some details).

Despite its size, word gets around Vancouver Island, and last fall someone called Adrian and asked if he would be interested in adopting a handpress, like, tomorrow. Being Adrian he said, Sure! I heard about all this via email, and his initial description made no sense: he'd acquired a large Hoe Washington-style handpress with a bed that ran back & forth on wheels. I couldn't really imagine what he was talking about. Turns out, I needed to see it with my own eyes.

Which I did this past month, while responsibly passing through the area, and happily seeing Adrian from two meters away. He really does have a lovely situation, the bright & airy studio garage next to his house on a rural acreage shared with goats, cherry trees, a large greenhouse, two dogs with seven legs, and everything else you wish you had, especially during lockdown. 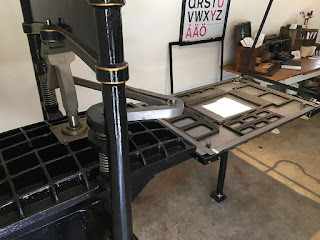 The press is bloody massive. It's huge. Makes HM's look compact. The platen is 26 by 40 inches – twice the area of HM's! The crane operator who delivered the press estimated the total weight around 3,000 pounds. It also looks quite new.

Maybe because of its size, it takes a few minutes for the differences to register. There is no rounce. And the bed has a weird tail. Most alarming of all are the wheels attached to the bottom of the bed.

Here's the story of the press, as far as we know it: it came from Cott Systems of Columbus, Ohio. Cott (est. 1888) specializes in record management. These days that means databases, but for most of the last century it meant printing & binding the large ledger books used for land records etc. So at some point in distant time, Adrian's press might have been used to actually print the sheets for ledgers. The only explanation I can think of for the modifications was to adapt the press for proofing – someone thought using the rounce to move the bed was too much hassle, so they put it on wheels. 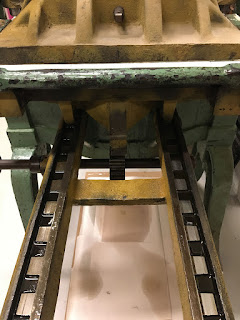 The bed of a handpress is supposed to travel along two parallel tracks that consist of raised ribs. The tracks should be filled with oil just to the height of these ribs (see above; note also the complicated floor-mounted system to collect the oil that drips from the rails of a well-adjusted press). Properly adjusted, the bed travels smoothly by turning the rounce. If you replace this arrangement with wheels running on a smooth steel track, you're basically playing Hot Wheels. 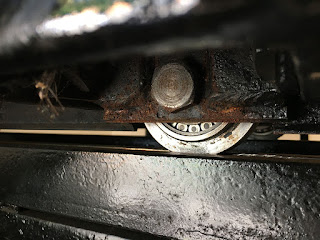 The press was sold to Howard Iron Works and restored by them in 2013. We inquired but they have no record or notes regarding the bed's modification when they acquired the press. Adrian thinks Howard replaced the original rails with the current ones, and upgraded whatever the original wheels/runners were with the current "spherical roller bearings" (what we think that type of wheel is called). 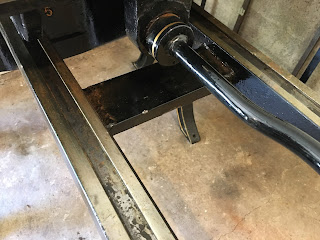 Howard sold the press to a Vancouver Island artist who moved it across the country but then left it in storage, unused. It was offered to Adrian by his estate. Moving it into Adrian's garage required an unplanned enlargement of the door frame, but who said moving presses was simple. 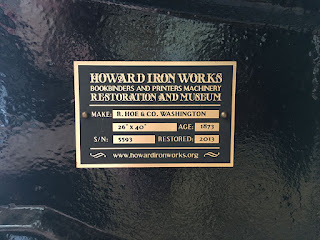 Aside from some surface rust on the bed, the press remains in its restored condition. Adrian has had a tympan and frisket made (have fun finding suitable paper large enough to cover those, buddy), and a handle attached to the back of the bed. He's also had some platen bearers made up. As long as he never lets the bed get too much momentum, he'll be able to use it like any handpress. The bed of HM's press weighs about 400 pounds. Adrian's bed is twice the size; just looking at it, I'm not sure it's twice the weight, but it's at least 500 pounds, probably more. Putting 500 pounds on spherical roller bearings running on rails three feet above ground seems like all kinds of potential for crushing disasters. Luckily it's in Adrian's capable hands. Always good to add another number to our ranks.

(* Poorly Printed is exactly the kind of book about printing I enjoy, and an excellent idea for a new printer/publisher to undertake. Using the lyrics from Radiohead's ‘Fitter Happier,’ repeated over seven sequential rectos, Adrian illustrates the kinds issues a printer will encounter, and must correct [e.g. with makeready], to achieve clear, consistent letterpress printing. Very useful for people who haven't had the opportunity to actually try printing, to understand the challenges.) 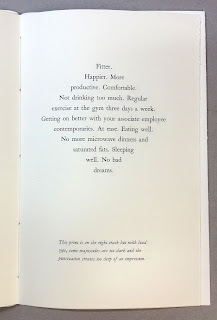 AND ANOTHER THING!
Finished printing the Griffo book. About a month behind schedule, but that's partly because I ended up reprinting five sheets, having decided my first attempt was off-color. Below are the sheets printed on Golden Hind for the five copies to be bound in the Netherlands by Natasha Herman, what I'm calling the "Dutch" copies. I think we're still on track to issue the book in November; we'll see how it goes. 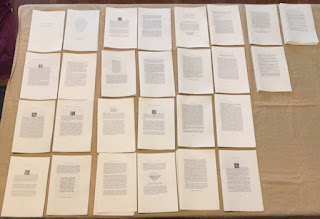