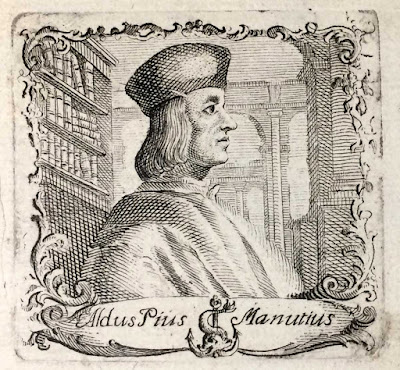 If only for my own future reference, here’s a quick look ahead at what HM will be up to over the next 12 to 18 months…

I’m almost finished casing in copies of The Kelmscott & Doves Presses. A few of the “Printed” issue will be on display with some of our booksellers at the upcoming Oakland, Pasadena and New York book fairs. Vamp & Tramp will have a special copy on display at CODEX: it contains a copy of the title page with original calligraphy by Martin Jackson, as it will appear in the “Written” copies. Those are currently being bound up by Claudia Cohen: quarter vellum, sewn on slips laced into boards covered with original paste paper that has been tooled in gilt. We expect the “Written” copies to be ready in April. 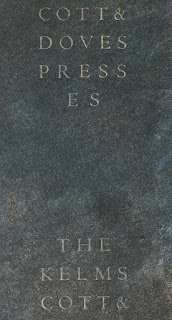 While Claudia finishes the bindings, I will have started printing her next collaboration with Barbara Hodgson, PatternPattern. The book explores traditional and modern systems of analyzing symmetrical, decorative patterns. These systems — grid, proportion, tessellation, symmetry, motif, and style and culture — will each be introduced in a brief overview and accompanied by illustrations, most of them examples hand-drawn by the authors. The focus will be on design development, progression and variety, emphasizing the possibilities for infinite interpretations of basic styles. 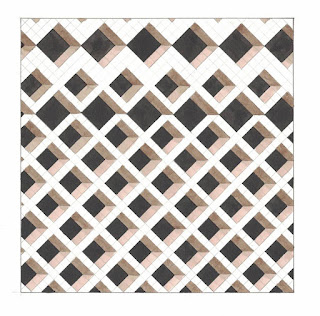 The book (9 inches square, 51 pp.) will be set in Fournier, printed with the handpress on dampened Arches paper, and issued in an edition of 30 numbered and six H.C. copies. Copies1-10 will be extra-bound and include additional samples. As usual with their books, the extensive drawing, colouring and tipping-in will take a few months after printing is completed. Publication is scheduled for the end of 2019. A mock-up, with 8 pages of sample text and illustrations, will be on display with Vamp & Tramp at CODEX. 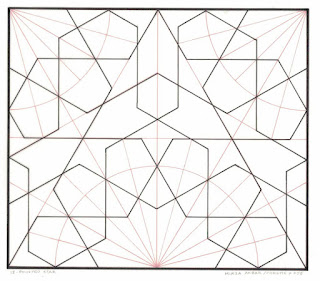 It’s fitting that I’ll be printing PatternPattern, as it will be the final publication from HM Editions. That imprint was initially conceived as an outlet for working with people who had projects I found interesting, but not the means to get them produced. When it was started there were lots of people with interesting ideas around, but I haven’t been encountering them in recent years. Barbara & Claudia haven’t actually needed my assistance in ages, so there really isn’t any reason to keep the parallel imprint going. They will continue their collaborations under their own imprint, and we’ll all still be in each other’s business. Nothing’s really changed except what appears on the title page. 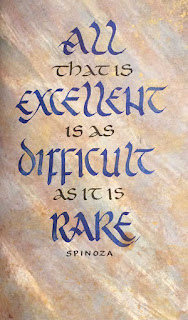 Printing PatternPattern will take about three months, during which time I’ll also be working with The Aliquando Press’s Will Rueter to prepare a collaboration of our own. It will be the second in what I hope will be a short series of calligraphic books that began with Francesca Lohmann’s An Alphabetical Accumulation. Will’s book will present a series of bookish quotations (about 15), each rendered calligraphically by him, in a variety of styles. (Shown above is the piece he included in deluxe copies of Pressing Matters.) Each quote will be printed on a recto, with some elements then added by him, so every page will combine printed and original calligraphy. At this time I’m expecting to have the book printed by the fall; he’ll then spend a few months adding the calligraphy, and then the sheets will go to Claudia Cohen for binding. So, a spring 2020 publication? The edition will be 36 copies, uniformly bound. 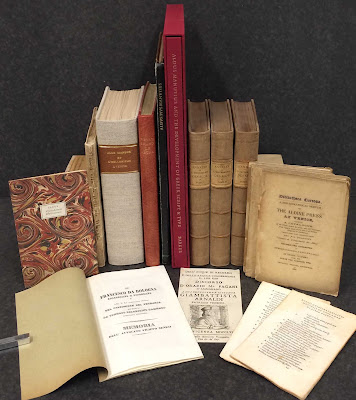 Before this year ends, I hope to begin printing the second, expanded edition of Fragments & Glimpses, the biography-in-quotations of Aldus’s typecutter, Francesco Griffo. I’ve spent the past year gathering source materials that weren’t available to me when I did the original (1998-9), which will be added to the text. I also intend to include reproductions of specific books and types referred to in the text, and I found leaves from a copy of the 1502 Ovid (Heroidum), which was set in Griffo’s original italic type, and will be including these in a special issue of the book. Publication will be some time in 2020.