The Man in the Window... 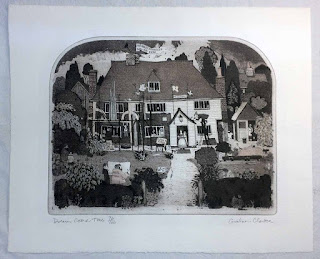 Sometimes while at work, particularly when doing detailed, picky stuff, my brain needs a break. If I’m at the computer, one distraction I occasionally indulge is surfing the local craigslist for “letterpress,” or “book press,” or my favorite, “etching.”

I happened to have heard recently an interview on Fresh Air with Robert Wright. He’s a visiting professor of science and theology at Union Theological Seminary, and the author of a recent book (Why Buddhism Is True) that examines connections between Buddhism and Darwin’s theory of evolution, to explain why we seek pleasure but are never satisfied. Speaking to Terry Gross he said:

“The problem of paying attention is a problem of controlling your feelings. If I’m working on a piece of writing, and it’s getting to this problematic stage where I don’t know what to do next, that starts feeling unpleasant. Then suddenly it pops into my mind that there’s this smartphone I want to research because I need a new smartphone. And I enjoy that, I like researching smartphones, and that’s a good feeling. If you really pay attention to what’s going on, when you get distracted and fire up your browser, it’s just a contest of feelings. There’s a kind of thirst you’re surrendering to.”

So that explains the craigslist surfing. But just for printing equipment and prints, nothing else.

I got distracted from the point of this post, which is a print I found: Scrolling through the dreck posted for sale, I spotted one print unlike the others, most immediately because of the shape of the image area: the top was arched. I’d seen prints like this years ago, the shape and the style, at the home of Jan and Crispin Elsted, aka Barbarian Press. I recognized the artist’s name from their prints: Graham Clarke. I’m not a particular fan of his work, it’s too folksy in content and execution for me. (Folk, as an adjective, is a word I pronounce with a sustained short U substituted for the ol: uuuuu…) It reminds me of Rigby Graham, and I never understood his appeal either. 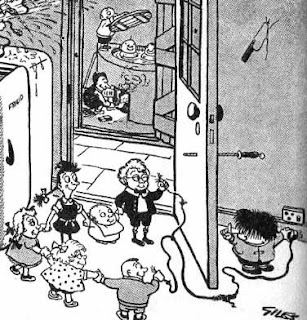 This particular print of Clarke's also reminds me of the newspaper cartoonist Giles, for the level of activity crammed in. Every anglo kid who grew up in Canada in the ‘70s had at least one, often many, copies of the Giles annuals published at Christmas. They often ended up in the bathroom, and with nothing else to do, kids looked through them. We were oblivious to the specific political or social topics, but his cartoons were great for being packed with all kinds of visual gags and details. There was a shaggy little doughboy with a jacket that was held closed with a safety pin. He didn’t seem to be part of the “Giles” family, but he was always in the background. A proto-Bart Simpson without any speaking lines. I liked him. 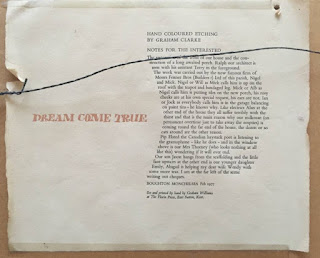 Pip is what Crispin’s family and friends call him. I knew he and Jan were in the UK in 1978, that’s when they first got into printing. And they were introduced to it by Graham Williams, of the Florin Press. Now we’re getting to what really interested me about this print: not so much the etching, but this sheet on the back, printed by Williams. 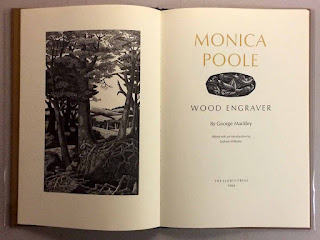 One of the first press books I bought, and to this day one of the best I’ve ever bought, was a copy of Monica Poole, Wood Engraver, beautifully printed by Williams on not just one but three handpresses - a Columbian and two Albions. Poole’s work was stunning in detail and execution, and not dull pastoral studies seen in too much wood engraving. Even when her images do stray to the countryside, there’s a sense of menace, and often details that almost seem surreal. Very kool. 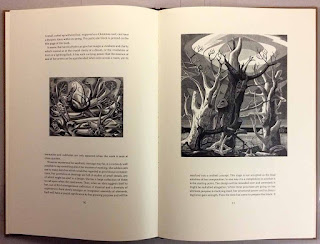 The book was set in Optima, which might seem an incongruous choice but it works. Fantastic book, immaculate printing. A cornerstone of the HM Handpress Library. I’d love to get my hands on a deluxe copy, which includes an extra section by Williams about printing the blocks. He was actively printing and publishing through the 1980s, but seems to have devoted himself primarily to sculpting. 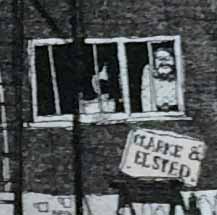 I sent Crispin a photo of the print and sheet, and asked specifically about the plans for Clarke & Elsted. My inquiry generated one of his charming notes in reply, part of which I share here (with his blessing):

"I remember the print. In fact we have one inscribed to us by Graham with its original title, which was "Restoration Comedy", but his dealer in Cranbrook, Kent, thought that it was a bit too lofty, so Graham changed it. We were staying with Graham and Wendy when he made the etching (we were looking in the area for a place to live) and I guess he thought the two names sounded euphonius! The job in question was in fact some restoration work on the front of their cottage, which dates from the 15th century (there’s a date carved in the mantel) in which they still live.”

Graham Clarke continues to issue prints, and prices for earlier ones (his career seems to date from around 1971) start at a few hundred pounds. The print on craigslist was just a few pounds, so I bought the thing. I’d thought of laying the text sheet into my copy of the Poole book, a kool piece of (unrelated) Florin ephemera, but it’s slightly too big for that. The print I extracted from its acidic matting. I’ve wondered if finding someone who can cut the arched window in a mat would be difficult, but it’s moot for now.

Francesca's An Alphabetical Accumulation is being sewn & stuffed into limp vellum covers as this is being posted. Copies should be on display at next month's book fair in Seattle. I've added a page on the HM site, under books, with some photos.

I have likewise added a pre-publication page for the Rollenhagen/Wither leaf book, Labour Vertue Glorie, with some production and edition details. I'll be posting images of the book as work progresses, illustrating some of the specific parts, like the working lotterie volvelles.

Anyone interested in either book should get in touch with one of HM's booksellers; they'll have all the details and can assist in reserving a copy.