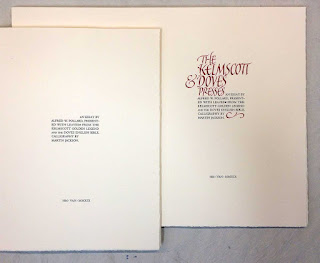 I started printing the new book last week; that, & a lack of anything worthwhile to report or rage against left me with little time or interest for posting. As I knew it would be, this project is a bit of a logistical hassle due to the sheets' large size (20 x 15"). They're so big that they make the Ostrander-Seymour Extra Heavy press look compact, which is an alarming thought.

Due to unexpectedly enthusiastic response to the plan for some of the 50 copies to have all of Martin Jackson's calligraphy actually written out by him, i.e. true calligraphic copies, with the agreement of all involved (including those who'd placed orders), the number has been increased from 12 to 20. Above is shown the sheet with the title page. The ones at left will go to Martin, when all printing is completed, and he will add his parts (in red). The ones at right are for the "Printed" copies, which will be cased at HM.

It takes three days to work off a sheet - one for each side in black, then a third for the addition of red to both sides - so we're more or less on schedule. 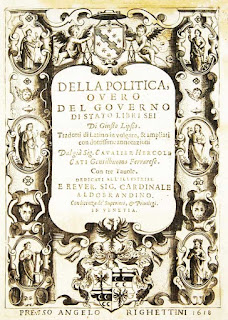 Unrelated: encountered a printing term I'd never heard before - chalcography, as in "a chalgographic frontispiece" (above). As far as I can tell, the process is synonymous with intaglio, so I don't understand if the term implies some difference.

I'll try to have something more interesting than just a progress report next month. With luck I'll encounter something book-related that will set me off...