The Printer at Work 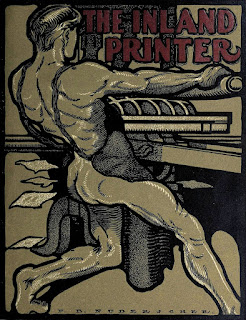 Continuing the handpress theme from last month, that's basically a portrait of me at work. Except they added the apron, I don't like those things.

News: all 50 copies of the Griffo book (+ 8 hors commerce*) have been collated, with an Aldine leaf laid into each. The five “Dutch” copies have been sent to Natasha Herman's Redbone Bindery, the 15 vellum copies sent to Claudia Cohen's, and the rest are piled around here waiting to be sewn up. This fall seems particularly uncertain for making commitments about what will happen when, but outside factors aside, publication remains slated for November. I'm hoping to include a post illustrating the binding of the “Dutch” copies, and also one about the vellum copies. Watch this space. 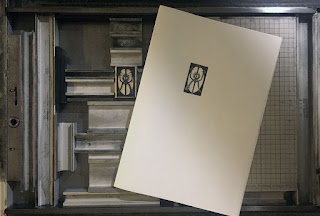 Some of the copies include a set of the book's illustrations proofed on F.J. Head handmade paper. Although it doesn't appear in the book, I included the original A Lone Press device (“The printer's devil is a snake”) cut for me by Shinsuke Minegishi, for the colophon of the original (1999) Fragments & Glimpses. That was our first collaboration.

The Librarything.com site has a “fine press” group which occasionally floats news of a press or person new to me. (I emphasize occasionally; many people in the group seem to include things like the Folio Society and Easton Press under the umbrella of fine press, but there's no point in having that discussion.) This past month there was a mention of Tara Press, which focuses on “translating poetry in Arabic, Syriac and English” (not clear if that means translating the first two languages into English, or translating original works from all three languages). The Tara site mentions Jericho Press, which is particularly interested in Hebrew and Greek metal types (sample books of their holdings in each language look cool). Somewhere in all this I also saw reference to John Grice's Evergreen Press, which has only been publishing and job-printing for a few decades by now. His book Ornata is one of the first things I've seen in ages that I'd be tempted to buy, but luckily no copies are available. It's good to know there are always people out there doing interesting work to be discovered, especially in the cloistered world of letterpress publishers. 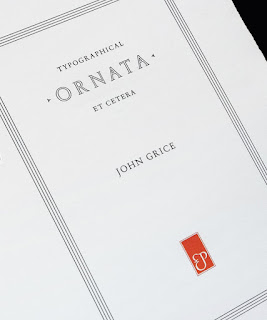