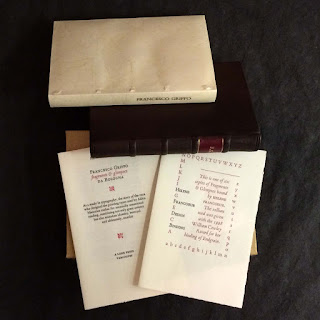 The next book will be in the press in January. Francesco Griffo da Bologna - Fragments & Glimpses is a second, expanded edition of the "biography" I published in 1999. I use quotes because his story was assembled using quotations from a wide variety of sources, organized into chapters (e.g. The Roman Type, The Greek Types, etc) – similar in concept to oral history, which I like because it removes the authors and all the noise they introduce. Many of the sources quoted in the 1999 edition actually were secondary or tertiary sources, drawing on original work by other authors; for the new edition, I have tracked down (and translated, as necessary) the original sources of fact and opinion wherever possible, so while the book's structure follows the original, more than three-quarters of the content has been replaced with new material. 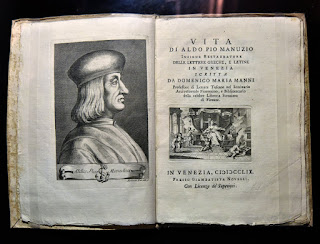 Griffo's story is interesting for reasons beyond the quality and influence of the Latin, Greek and Hebrew types he cut for Aldus. The story of the italic type overlaps with the history of intellectual copyright, and the question of authorship. His career after breaking with Aldus included cutting types for books considered equal to anything Aldus published, in form and content, including the six small volumes he published himself in 1516–17. Plus, there's the matter of bashing in his son-in-law's head, for which he was tried and presumably hanged; the following three centuries, during which his types were remembered but he was not; his mis-identification in the 19th century as the celebrated artist Francesco Raibolini; the subsequent debate among Italian bibliophiles over why this could or could not be the case; and ultimately, discovery of proof that he was his own man. You can't make this stuff up. 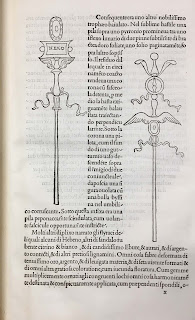 This new edition is expanded by the introduction of facsimiles of Griffo's types, and four appendices recounting the 19th-century debate between Antonio Panizzi, Giacomo Manzoni, Adamo Rossi and Eraldo Orioli over exactly which Francesco had been Aldus's punchcutter. These texts were originally published in Italian, and to the best of my knowledge, have not previously been published in English. The originals were translated for this project in England by Emma Mandley. 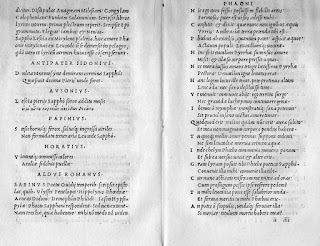 Finally, each copy will contain a leaf from the second (of three) volumes of Ovid's writing, issued by Aldus in 1502, set in Griffo's famous italic type. Most of these leaves come from the "Heroidvm," the balance from "Ad Liviam". I found a total of 56 leaves, separated from the rest of the book who knows when, and so that will be the number of copies in the edition. At this point it looks like the book will be issued in three states: extravagant full leather, boxed (available by advance subscription only); quarter leather; and laced into a handmade paper case. The first two states will include an intaglio reproduction of an engraving from the title page of Domenico Manni's Vita di Aldo (Venice, 1759; shown above). The full-leather state will also include proofs on Japanese paper of several illustrations in the book. 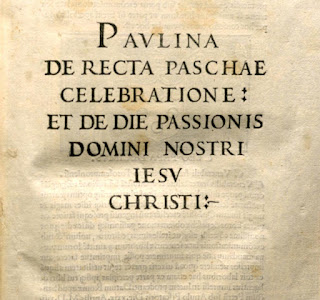 The book will be 6 x 9 inches, 104 pages (+/-), set in Bembo. It will be printed on dampened Arches wove paper, two-up, on the handpress. At two sheets a week, that's about four months of printing. Then there's the binding, so copies should be ready for issue in the fall of 2020. Over the past two years I've had fun assembling some of the key sources for this project, and making my way through them with rudimentary Italian and only slightly better French. I'll post images of some of the more interesting pages next year.

Will Rueter continues work on the calligraphy for his Books Are My Utopia. Claudia should start the binding early in the new year. Copies out by April?

Copies of PatternPattern started traveling far & wide last month. The deluxe copies will be the last ones out, hopefully by the end of the year.

Finally, I want to note the life, and loss, of HM's valued bookseller and friend, Bill Stewart, of Vamp & Tramp Books. He was one of the few booksellers to show any interest in the first edition of Fragments & Glimpses, 20 years ago. Since then, he and his partner Vicky have been wonderful supporters, and also just decent people who are fun to hang out with, passionate about books and the people making them. I'll miss knowing Bill is in the world.

Thanks to everyone else who has supported HM this past year (many in ways they don't even realize). It's always appreciated & never taken for granted.