A Stack of Books 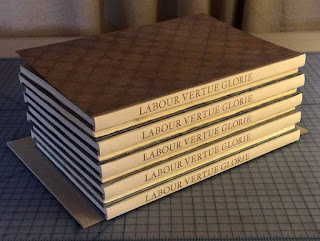 Down to the last strokes of finishing off Labour Vertue Glorie. Just have to attach the spinners to the volvelles in these copies (has to be done after casing-in & pressing or the spinners will deboss the facing sheet, even with the spacer leaf). It's fiddly work but mostly mindless: I can let my mind ponder elements of the upcoming Kelmscott/Doves leaf book.... 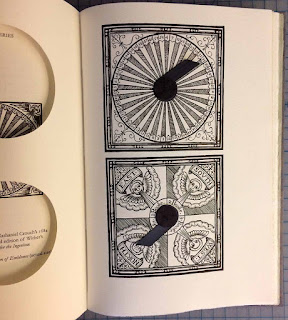 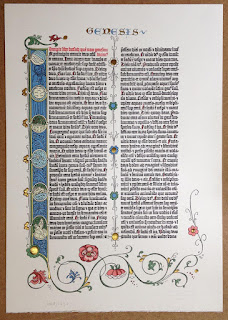 Random notes of a bookish nature…

I’m currently reading Alix Christie’s 2014 novel, Gutenberg’s Apprentice. Just like lawyers can’t read most legal novels and cops can’t read cop novels, because they almost always ring false, my initial reaction to books about printing & etc. is extreme skepticism. So far Christie’s novel – which revolves around Gutenberg’s relationship with Johann Fust and his adopted son Peter Schoeffer – is entertaining & seems well researched, which isn’t surprising given her background in printing: she apprenticed at the Yolla Bolly Press, which produced some beautiful books in the 1980s and '90s. Christie still owns a Chandler & Price, although she now lives in London & it’s on loan to someone in San Francisco. Her publisher created a good Web site for the book, with some historical and technical background for readers who want to know more. Apparently the novel's English publisher issued a handful of a special "large paper" copies with an original leaf from the 42-line Bible tipped in, but I haven't been able to find any listings or info.* 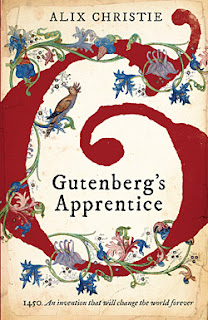 Christie’s book sits on a shelf at home beside another Gutenberg novel, Blake Morrison’s The Justification of Johann Gutenberg (2000). Christie’s Gutenberg is a less immediately sympathetic character than Morrison’s, if I remember his book accurately. Both are enjoyable historical yarns. 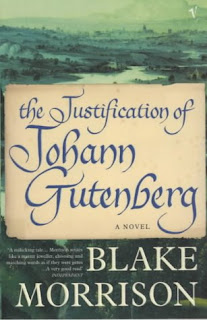 I recently encountered a non-fiction book about letterpress and the associated crafts, which I will not name. It was so wretched that I couldn’t just toss it aside, I actually had to skim the entire thing to see if the banality & ignorance were sustained to the end. (They were.) It’s an example of a book that exactly does not understand the world of historical or contemporary letterpress. The narrative is built around the author’s collaboration with a local letterpress printer whose quirky personality is reflected in his publications. It is yet another case of someone stumbling on to an enthusiastic but not very skilled hobby printer; thinking they’ve discovered a forgotten world full of esoteric histories and occult practises; and deciding they’re the person to tell everyone about it. For readers with absolutely no knowledge of the history of printing or publishing, the book might be an entertainingly vicarious excursion, but there are many better choices if that’s an excursion you want to make. Readers already interested in the topics will find its naiveté and shallowness depressing – is this really what the traditional crafts associated with printing have come to, light fare for an unremarkable meditation on print culture? This book – probably like the one chronicled in its text – did not need to be published. 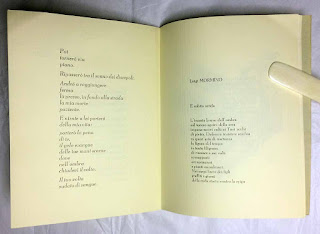 Bad letterpress printing (ahem you above) irks me, especially when the person doing it also presents her/himself as a representative for the medium. This is why I have only ever considered myself someone who knows what good letterpress should be, rather than someone capable of achieving it, much less teaching others. I’m all for introducing people to letterpress and fine-press publishing, but let’s lead with our best efforts so those people will also develop an appreciation for quality, in materials and execution. Just smashing type into paper only diminishes the work of people dedicated to mastering – and sustaining – the vocations and techniques that combine to produce a book.

The next book is underway & might even appear before the end of the year. It’s another leaf book: an essay by Alfred Pollard about the Kelmscott & Doves presses, accompanied by a leaf from The Golden Legend and the Doves Bible (!). I have enough leaves to issue a total of 55 copies. Details to follow…