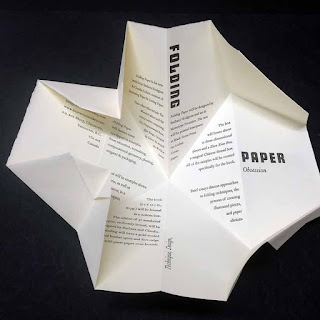 The tale of Folding Paper is now almost told: the second batch of copies (out of three) will be going out over the next few weeks. The first copies that went out, in May, enjoyed instant and enthusiastic reactions:

“FOLDING PAPER just arrived here and it is gorgeous, marvellous and WONDERFUL!!! If I weren’t already prepared by opening several of your other previous miracles I wouldn’t have believed it!”
Michael R. Thompson
Michael R. Thompson Rare Books

“It is a stunning achievement. You and Claudia and all who worked on it should be so proud. I see the volume with all its parts as a work of art fused with scholarship. Thank you for creating such beauty.”
Anne Bromer
Bromer Booksellers 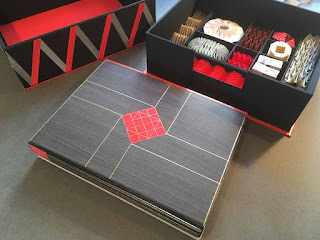 Presented in a box with a lift-off top (similar in structure to The WunderCabinet), the 80-page book rests on top of compartments holding 15 folded-paper structures described in the book, along with a magical Chinese thread box. Barbara Hodgson researched, wrote and designed the book (in collaboration with Claudia Cohen) over a two-year period. Before, during and after this process, Barbara and Claudia folded their way through 450+ paper samples needed for the edition. 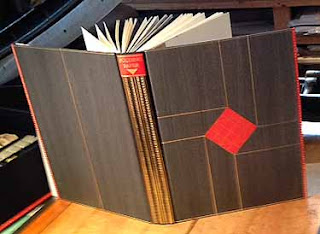 After the book was printed at Black Stone Press in late 2016, Claudia tackled the challenge of making boxes and binding the books. Like their previous books on related topics - Cutting Paper, Decorated Paper, and the color series - it’s this tremendous amount of hand-work required to complete each copy that limits the number of copies in each edition. The letterpress is the easiest (or at least, most straight forward) part!

The through-line for all of Barbara & Claudia’s collaborations has been expanding the book form to explore and display a vein of the graphic & decorative arts, often one that has become outmoded or commercially unfeasible in contemporary applications. The book provides the history and context, while the embellishments - from tip-ins to peripherals - provide the opportunity to actually hold what is being described, to see how it’s constructed and how it works. 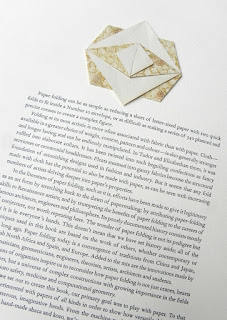 As with some previous projects, we took the new publication as an opportunity to ask Barbara some questions about the creative process behind it…

Which of the pieces/samples in the book proved to be the most technically difficult?

“There were several kinds of technical difficulties that we had to overcome. Number one was our own abilities to fold paper with accuracy and precision. We practiced a lot before we reached the point of being confident that we had achieved sufficient proficiency. Practice also included trials on various types of paper, since a model might be successfully folded on one type of paper only to fail miserably on another. 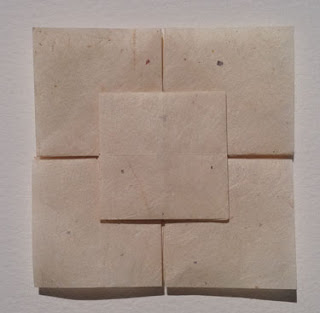 “The second difficulty was figuring out how to place now-bulky pieces of paper within a book that must lie flat. Solutions included eliminating the bulkier models;* folding the models from the thinnest papers possibly; building up the spine through the use of shims; using thick, rigid paper for the book’s pages; and distributing the models judiciously. (* Some of these “bulkier models” ended up in compartments that sit underneath the book, in the box.) 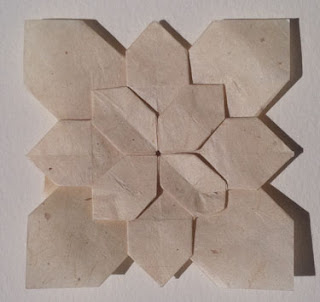 “From the point of view of individual pieces being technically difficult to fold, many were worth the effort. One was the tessellated hydrangea [shown here], designed by Shuzo Fujimoto. It incorporates a number of ingenious folding techniques, making an intricate, three-dimensional yet flat model. Another challenger was a family of folded puzzles known as flexagons. These chains of equilateral triangles are assembled in such a way as to shift faces when folded.” 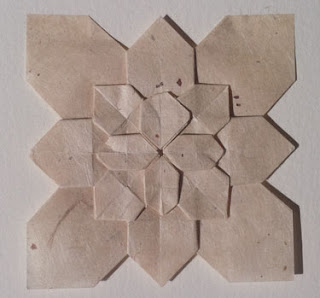 How important is paper in the art form? Are there some techniques that work only with specific papers? And given the increasing decline in paper varieties available, how if the art form being affected?

“Paper is 90% of the success of the art form. If the paper is inappropriate, the result will always be failure, no matter how proficient the folder. We found that many Japanese papers will work well for making envelopes but will be too soft for making pleats. Glassine is terrific for tessellations (repeated regular polygons) because it is thin, strong and translucent, but it is not appropriate for most containers. Lowly kraft paper is perfect for practice, as it can be folded into almost anything, but it is not a good choice when the aesthetics are important. In general,   strong, thin papers (with long fibres) were the best choice. In the book, we include three pages of paper samples, showing the kinds of papers we experimented with.

“The decline in the availability of papers is more of a concern when it comes to visual appeal. Widely available common papers, such as cotton bond and the kraft paper mentioned above, fold well but are not as appealing as other, harder to come by papers.” 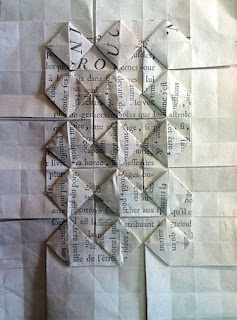 Are there any contemporary fine artists doing work with folded paper that you find engaging?

“There are a number of contemporary artists and non-artists making amazing objects from folded paper. One of the wonderful things about folded paper is its appeal to architects, engineers, mathematicians, and others outside of the arts. They are using folded paper and its techniques to solve problems, create structures, design packaging, and so on.”

How, or when, do you two decide when a sample is bound into a book vs being separate (in the box)?

“Any sample that can’t be folded flat goes into the box instead of being bound in the book. Some examples include certain three-dimensional pleats and tessellations, such as a pleated piece known as a trouble-wit [above], which collapses, expands, and revolves, but never lies flat; and a tessellation known as a waterbomb [below], in which a piece of paper is folded into a field of three-dimensional cubes.” 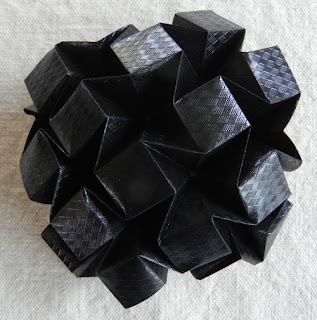 Where would a person interested in collecting (old) folded-paper art or pieces look for them?

“One of the existing sources of older pieces of folded paper can be found as children’s kindergarten exercises, once known as Froebel gifts and occupations. These are generally found in albums, dating from the late-19th to early-20th century. Outside of these albums, certain vintage Japanese origami books incorporate actual folded origami models. Otherwise, we found very little, in spite of our best efforts. Because of this paucity of material, we made all of the pieces we include in Folding Paper.”

You two have done two previous book similar in scope & concept, Decorating Paper & Cutting Paper. When you finish one of these projects, which take anywhere from 12 to 24 months, do you find that, having delved as deeply as possible into the subject, you just naturally move on to something new? (I’m doing a poor job of asking, once completed, are you done with the topic & ready to move on? Or possibly worse, do you find yourself thinking of one more thing you could have included…?

“None of our books let us go when we have finished.”

FOLDING PAPER - TECHNIQUE, DESIGN, OBSESSION is a quarto-sized book, 80 pages plus tip-ins, set in Monotype Fournier and printed letterpress on Arches Cover paper. Each copy contains some 150 tipped-in examples from pleating, education, computational geometry, toymaking, origami and packaging. Included will be examples shown in progress, as well as finished pieces, in a variety of papers. Brief essays discuss approaches to folding techniques, the process of creating illustrated pieces, and paper choices.

The book is bound in quarter leather and paste paper with onlays, leather fore edges and extensive gold tooling. The design and combination of materials is repeated on the box, with interior compartments arranged to snugly fit the samples included.

The edition is 30 numbered copies signed by the creators, plus six A.P. copies. The edition was fully subscribed before publication, but copies may still be available from  HM’s regular booksellers; please contact them (see list at right) directly for details.

Claudia & Barbara promise their next book (publishing 2019-ish) will be equally imaginative, but no details offered yet... 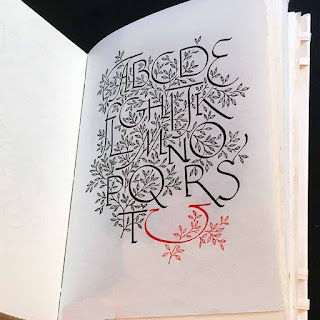 I'll be posting a regular monthly update in a few days, featuring info and images from the just-released Folding Paper. Until then, here are a couple of images of HM's next publication, currently being bound (in a non-adhesive limp vellum structure) at Claudia's studio: Francesca Lohmann's An Alphabetical Accumulation. See you before the end of the week... 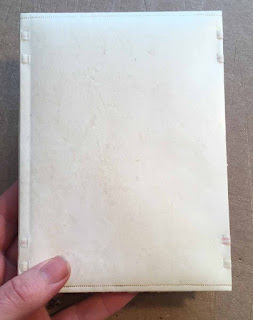