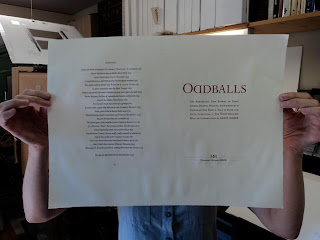 At exactly 2:34 p.m. last Saturday we finished printing Oddballs. Above is one of the Heavenly Babes holding the last sheet (recto is the title page, verso is second half of the contents listing). Red was the last run. The day before we printed the black and pale gray (not really evident above, but maybe it is in the close-up below). Those two colors were done simultaneously, with the gray section being inked up separately and dropped into the form for each impression. 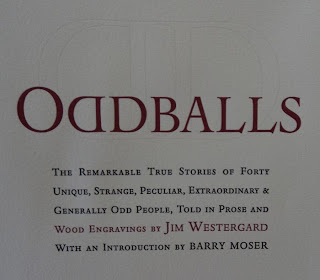 After a night, day and night of celebration and relaxation, we're into collating the sheets and tipping in the engravings, 41 in each copy (the 40 oddballs plus Jim's self-portrait frontis). With luck, copies will be ready for the Seattle book fair in early October, and the Vancouver wayzgoose later that month. 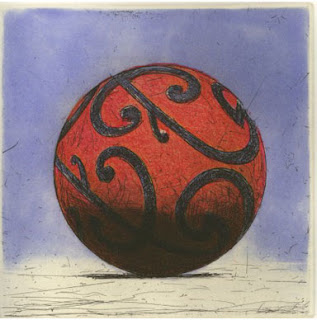 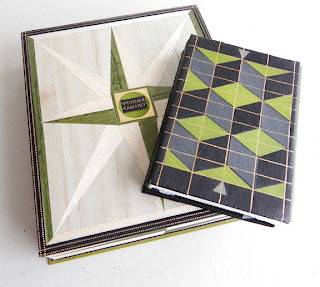 As previously mentioned somewhere in the past on this blog, last summer for fun & laughs we printed a few copies of a complete miniature version of The WunderCabinet. These shrunken heads came in at about 30% the size of the original, which means a page of about 3 x 4 inches, with text in 2-pt type (printed on dampened pieces of Reg Lissel's linen paper deemed too thin for the full-sized book). As is always the case with Barbara and Claudia, this little bit of off-hand hilarity snowballed out of all proportions, with everyone attempting to outdo the others, and has yielded this: 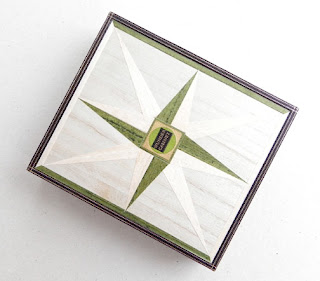 Which is to say, five miniature replicas of the deluxe issue of The WunderCabinet (plus 3 hors de commerce). It's the same full-leather binding with onlays, laid into a box covered in wood veneers, with accompanying oddments and disturbing bits. 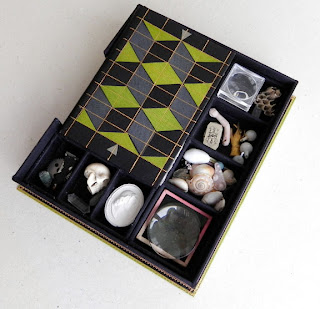 These photos are the first completed copy: Claudia's been spending an unprofitably large amount of time with this little distraction, during which she reportedly has overcome much of her strong dislike for small books. Meanwhile, we'll continue pondering how to list this mini-WunderCabinet in the HM bibliography.

News From All Over

A longer break between posts than we usually take, all because of Oddballs. The colophon was printed, the sheets sent to Red Deer for Jim to sign, and then returned to HM. We carried on with the last few pages of printing. The end is in sight. Meanwhile, a few things of interest that have come our way lately...

Wicked Bugs: The Louse that Conquered Napoleon's Army and Other Diabolical Insects was released in May and has received extensive media attention. This is a sequel to Wicked Plants, written by Amy Stewart and featuring reproductions of original etchings by HM fave Briony Morrow-Cribbs. The New York Times site features a slideshow of seven illustrations from the new book, and there's even a Youtube clip of Briony and Amy talking about the project. Happily, unlike Wicked Plants, the publisher seems to have resisted the urge to incorporate additional illustrations (dull in comparison to BMC's) by a second artist in the new book. 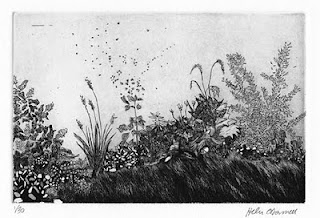 Speaking of Briony, it's subscription print time: for the past three years, she and her partner at Twin Vixen Press, Helen O'Donnell, have offered a set of two original etchings to subscribers at a very reasonable price (2010's are shown above and below). Details for this year's offer can be seen at the TVP site. 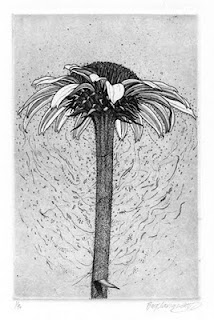 Still speaking of Briony, check out this miniature etching press her mother Buffy recently made with at Bill Ritchie's Emeralda Works in Seattle. While even larger tabletop etching presses have poor reputations for printing ability, Ritchie's miniatures apparently are the real deal.

The gang at Shakman Press have just published a "small specimen of typefaces designed by Emil Rudolf Weiß, bound by Sarah Creighton in dashing pastepapers. The typefaces used all come from the spectacular collection of the Druckladen of the Gutenberg Musuem in Mainz. Weiß's designs—Antiqua Kursiv, Antiqua Fett, Kapitale, Lapidar Halbfett and Kapitale Halbfett—are reproduced in two colors and printed on mould-made Zerkall paper." The edition is just 25 copies in English, 10 in German, printed letterpress on a Korrex cylinder press. All that and a Sarah Creighton binding for just $60, it seems a steal. 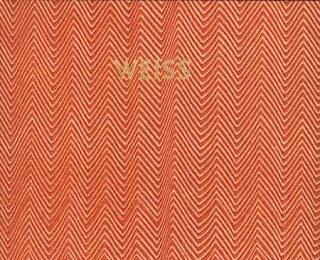 Stumbled across "a blog about fine press books" called The Whole Book Experience written by one J. Davis. Might be of interest to people whose tastes run toward the genre's more conventional traditions and subjects.

A significant new addition to the HM handpress library is expected to arrive later this week. Watch this space...