How to Stack Books 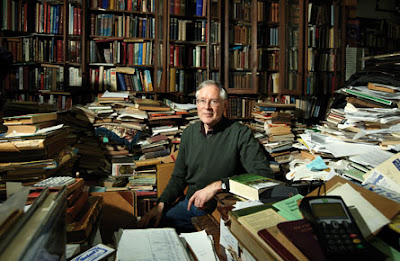 Maclean's Magazine has published a profile of Vancouver's MacLeod's Books, and owner Don Stewart (the photo above, from the article, is by Brian Howell). MacLeod's is Vancouver's most storied used and antiquarian shop, with a history that now spans five decades. Don is among HM's first generation of patrons, and continues to be a source of inspiration, advice, found-treasure stories, and, of course, books. In fact, one of the cool things about Don is that customers go through an esoteric probationary period - the duration and terms of which are never discussed, but generally have to do with one's level of knowledge, willingness to learn, and commitment to actually buying books. The successful candidates are elevated to a cadre that qualifies them for invitations to purchase certain items that will appeal to their particular interests. These items are never on display (or online), but appear from unknown repositories, often with the story of their provenance. (We know that somewhere he has a copy of our 1998 Griffo book, and a few other very early HM efforts. They will bubble up to the surface one day...) Should you fail to act when the opportunity is presented, you cannot be sure it will recur. Readers whose interest in piqued by the article's mention of a panoramic photograph of Terrace, B.C. please note that this is an error; it's Trail. And for an even better shot of the shop, here's Stan Douglas's famous (& fantastic) photograph, which really needs to be seen in its original 1.75 x 3 meter size for the full effect: 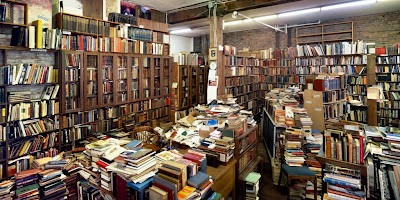 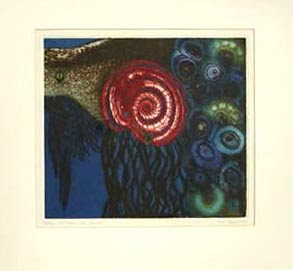 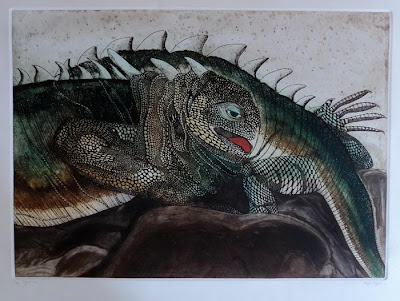 Found this etching at a flea market last weekend. Edition of 50, titled "Iguanas," image measures approx. 15 x 20 inches, the colors printed from multiple plates. Stunning. In fact, it's so arresting that we asked the price just to see how much the peddler thought it was worth, expecting to hear some ridiculous price that would allow him to retire. But no! It could be had for the few small bills in our pockets! But since getting it home, all attempts to find any information about the artist - or even mention of him/her - have been fruitless.

The print is signed Rouó Sagoan. It doesn't show well below, but we're sure that third letter is a U.

At the lower right corner of the sheet is a blind stamp for the Sagaon-Vinaver Work-Shop:

Google turns up nothing for either the artist or the workshop. The print does not look terribly old - probably less than 20 years. In this day & age, how many people don't show up, at least tangentially, in a Google search? Any information about this artist would be appreciated; our e-mail is down at the bottom right of this page. 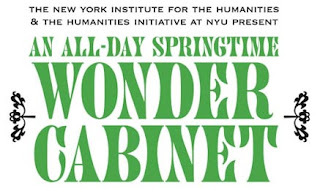 After being shown the New York Public Library's newly arrived copy of The WunderCabinet last month, Lawrence Weschler contacted co-author Barbara Hodgson with an invitation to participate in a one-day symposium celebrating the multi-disciplinary character of the traditional cabinet of curiosities.
This is the third such symposium organized by Weschler, in his role as director of the New York Institute for the Humanities at NYU. The purpose of the event is to "delve back into the roots of the modern Humanities in the sixteenth century’s Age of Marvels, when the sorts of disciplines that would eventually separate out into distinct Arts and the Sciences, as currently understood, still comingled promiscuously and sometimes well nigh deliriously." Barbara will give an illustrated talk about The WunderCabinet, touching on both its inspirations and details of the project itself.
More information about this event can be found here. 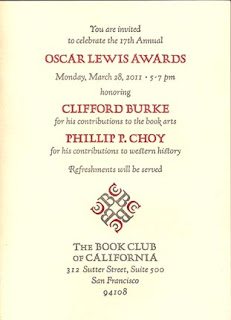 The Book Club of California recently sent out an invitation to the Oscar Lewis Awards presentation, an attractive piece of printing designed by Kathleen Burch. Not being familiar with Ms Burch, we looked her up & discovered the Ladies of Letterpress (which includes a brief CV for Kathleen, whose 30+ year career really should not be unknown to HM). The LoL is a site that seems to cover just about any printing-related topic its members care to raise and discuss. It also links to a site for a Ladies of Letterpress Conference, slated for August, with some interesting panel discussions and workshops. Not sure if it's open to printers from the paternal side. 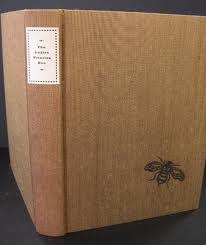 The LoL reminded us of the book The Ladies Printing Bee, organized and issued by Jules Remedios-Faye in 1995 . A very cool collection of signatures contributed by 39 women printers. Good luck finding a copy now. But check out the happenings at the C. C. Stern Type Foundry (of which Jules has been a driving force), which is having an open house on Saturday 26 March.

(Today's heading refers to Bertha S. Goudy, First Lady of Printing. Remembrance of the Distaff Side of the Village Press [The Distaff Side, 1958]).

Fonds is a Weird Word 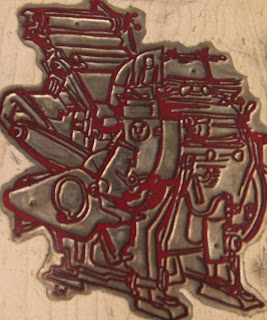 The University of British Columbia recently posted an announcement of the HM archives, which were acquired, sorted, deloused, & catalogued last year. Graduate students, starts your theses. 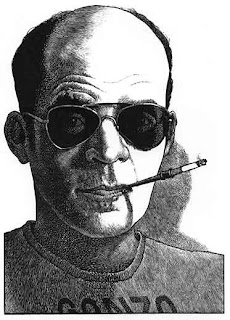 At the risk of jinxing the project's possible, eventual completion, we report here starting work on Oddballs. Although we generally find excuses to not issue prospectuses, we decided it might be appropriate in this instance. Turns out that this can be an excellent way to warm up for the main event - who knew? Here's a shot of the makeready for the outer forme (the press dislikes such unbalanced spreads, and required much adjustment of the platen bearers to even things out). 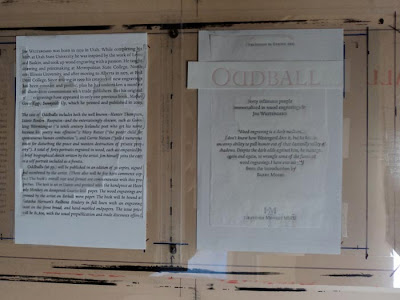 However, we are following past practise in issuing fewer copies of the prospectus (27) than there will be of the book itself (30). Each copy is sewn into a printed wrap, and the inside spread shows one of the Oddball biographies and prints from the book. We chose Hunter Thompson, for no particular reason. An interesting aside about this print came to us via new friend Miles Wigfield: turns out the print was featured on the cover of the Society of Wood Engravers quarterly journal Multiples, and elicited a rebuke from a member who objected to an image of someone smoking being given such prominence. Happily, the wet blanket was pelted with butts (some still glowing) in the Letters section of the following issue. As someone noted, given that it's Hunter S., Jim could have portrayed much more venal antics.

The prospectus: printed on the same Guarro laid paper we're using for the edition. The page is 8.5 x 12. 5 inches, the type is Dante. The engraving was printed by Jim on Zerkall, and tipped on to the page, as is the plan for the book (binder Natasha Herman is currently working on a dummy, figuring out all the shimming required to balance out 40 tipped-in prints & yield a pleasingly rounded back). Copies will be going out to HM's regulars in the coming week. 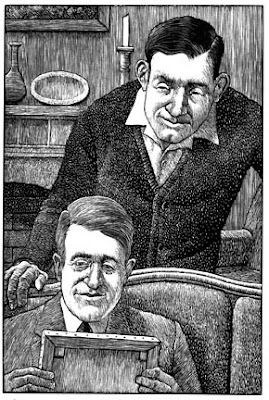 That Dastardly Valley of Shadows 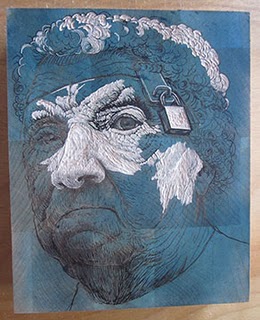 Jim Westergard's blog includes a detailed description of his process for creating a wood engraving, including photos of the different stages. An interesting behind-the-scenes look from the creator of our upcoming Oddballs book.

“Wood engraving is a dark medium...I don’t know how Westergard does it, but he has an uncanny ability to pull humor out of that dastardly valley of shadows. Despite the dark odds against him, he manages, again and again, to wrangle some of the funniest wood engravings I have ever seen.”
from Barry Moser's Introduction to Oddballs 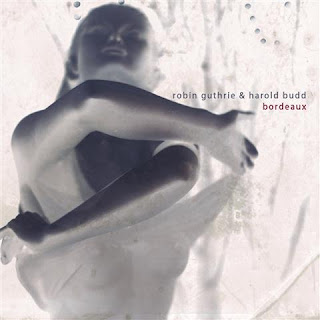 Distractions continue.... spent the past week helping organize Robert Reid's papers and books spanning six decades. Luckily HM is a graduate of the Don Stewart school of hand-truck driving... Oddballs is truly in the press this week; the prospectus will be going out next... Great news from Harold Budd: his latest collaboration with Robin Guthrie has just been released; Bordeaux is available from Darla Records. And next week Harold is in the studio to record his first solo album in a decade. New fuel to keep the press going.