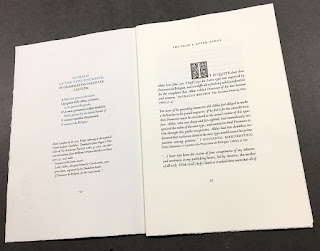 That's a spread from Fragments & Glimpses I printed last month. Getting close, but printing will probably continue into July. Still on track for publication before Xmas. I'm pleased to report that all five copies to be extra-bound by Natasha Herman have been subscribed. That will make for an interesting post.
For the 30 or so copies to be cased here at the studio, I'm thinking of doing two, maybe three different styles/structures. My original plan had been to do them all in a quarter-binding similar to that of Labour Vertue Glorie, but I think I'll also do a few in a limp structure, using Reg Lissel's abaca (paper)-vellum, which feels remarkably like actual vellum, and is just about as tough. It also has a lovely semi-translucent quality, and can be lined with a colored or patterned sheet (example below). These copies will be issued in a slipcase. 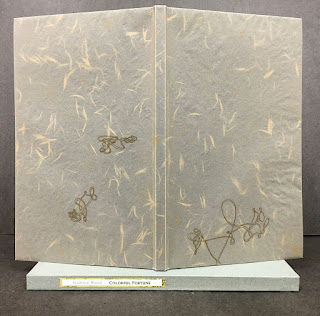 The third style I might try, and probably with only a few copies, is copied from two books (below) I purchased while doing the research for the project: Domenico Manni's Vita di Aldo, and Serie dell'edizioni aldine per ordine cronologico ed alfabetico (1803 ed.). Both are covered simply, in plain handmade paper, the (sewn) endbands laced through the covers. There do not seem to be any boards per se: the covers are very thin, their stiffness seeming to come just the adhesion of the pastedowns to the inside of the paper case. There might be a lining sheet, but it would be no thicker than the cover. The bindings have survived remarkably well, as a decent handmade paper would. I have some sheets made by Reg Lissel that would be perfect. 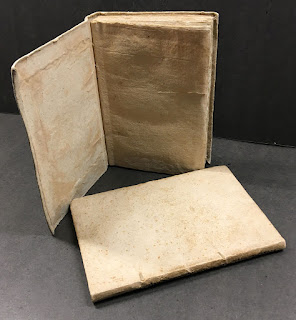 HM's recent Collected Lovecraft publication is sold out. Had some inquiries from people who were new to HM and professed an interest in letterpress/fine printing and Lovecraft, which means there's not a lot out there to be had. Roy Squires did some smaller works, in his characteristic retrained and clean style. Shelter Bookworks published a small edition of The Color Out of Space that I haven't seen but heard is appealing and well-produced (good luck finding a copy). I wonder why Hoyem never did a Lovecraft collection at Arion. Probably because he knew most of his regulars would be aghast. Related, Arion announced the installation of a new director, Hoyem's replacement, but I don't see how that's going to work out. Hoyem was Arion. In the middle of the last century the Limited Editions Club tried focusing on less luxe (& therefore cheaper) publications, and used book stores are awash in titles from that era. Then, in its final 10-15 years it tried going in the opposite direction – high-end livres d'artiste – and ended up disappearing in the stratosphere. I suspect the new Arion will try the former strategy, with the same disappointing result.

Printed copies of Pradeep Sebastian's entertaining bibliomystery, The Book Hunters of Katpadi, were hard to find outside of India, but now you can get the ebook for just a buck. And I'm not plugging it just because HM gets a few passing mentions, it's a fun read. 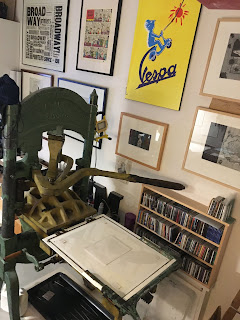 Speaking of what a dollar gets these days, all 27 releases from a Montreal musician who records under the name Le Berger can be had for less than a buck each (more if you have the means). I've had all 27 on repeat while printing Griffo in recent weeks. Up there's what the studio looked like while the music was playing. I just wish s/he/they would release an actual CD, maybe a four- or five-volume Selected Works; buying digital files is not very satisfying.

Virtual book fairs are becoming a thing. I cruised through one last weekend and saw some cool things. 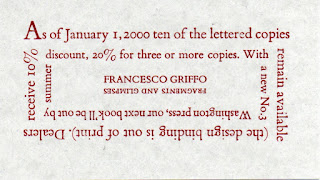 Can you believe this clever bit of advertising & tricky setting did not yield a single order for the book? It took a year to sell all 32 copies of the original Griffo book, and only once they were gone did I start getting inquiries from keen strangers. Probably happen all over again with the new edition. So it goes. But I'll try to come up with some better promotional material.