A New Leaf Book from HM 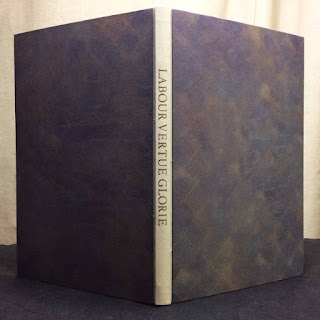 Time for an update on Labour Vertue Glorie: that’s the trial binding for the 25 copies (Series 3, numbers 24—48 from the edition of 48) being cased at HM. It’s similar in appearance (but not execution, alas) to the quarter-vellum copies being bound by Claudia Cohen. She’s progressed farther with her work, but we’ll both be wrapping things up over the month of March, and copies will be shipping in April. 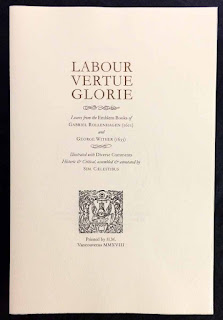 To recap the project, George Wither’s A Collection of Emblemes Ancient & Moderne shares the milestone for first emblem book printed in England with his contemporary Francis Quarles. Wither’s book, however, is distinguished by, among other features, its more lavish format and the quality of its copper-plate engravings, the same plates commissioned from Crispin van de Passe for Rollenhagen’s Nucleus Emblematum Selectissimorum. 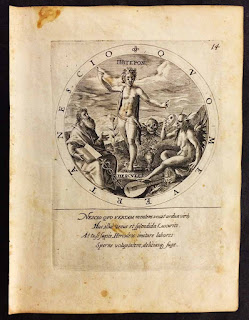 L-V-G presents leaves from both books, side by side, illustrating the technical, physical, and conceptual similarities and differences. Although the history and elements of emblems pre-date the Renaissance, the most commonly recognized form — an image, a motto, and an epigram, which combined make the emblem — appeared in Andrea Alciato’s Emblematum Liber (1531). The form flourished through the 16th century, but was already considered somewhat old-fashioned by the time Wither and Quarles wrote their books. Enough time had passed by the late 19th century for emblems to be rediscovered, and they have since become a field of lively academic study. 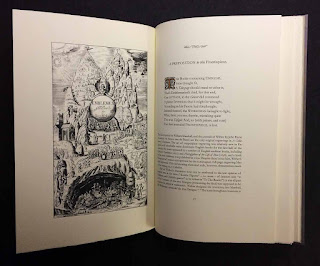 The focus of L-V-G (the title is taken from Wither, Book 1, emblem V), however, is not the content or interpretations of the two authors’ emblems, but the production and form of the books from which these sample leaves come. To that end, the book reprints three of Wither’s prefatory notes from A Collection: one about William Marshall’s engraved frontispiece (a reproduction of which is included), one about the “game of lots” included in the book, and “To The Reader” in which he discusses at length the book’s intent and creation. Each of these is appended with comments from a variety of sources, discussing and sometimes disputing the author’s words. L-V-G’s own prefatory material includes brief biographies of Rollenhagen and Wither; some bibliographic details about the two books; a history of Augustine Mathewes, the printer of A Collection; and the story of Wither’s protracted patent dispute with the Stationers’ Company, and how it relates to the publication of A Collection of Emblemes. Engraved portraits of both authors are reproduced, along with facsimile settings of an emblem (i.e. page) each from Alciato’s Emblematum Liber and Quarles’ Emblemes. In addition to de Passe’s elegant engravings, Wither’s book was noteworthy for including a game at the back: two volvelles with spinners that would direct players to a specific emblem in the book for their personal consideration. Most existing copies of the book lack this final leaf with the volvelles. L-V-G will reproduce both, with working spinners, and the volvelle from an earlier work, by the Jesuit Jan David, which is thought to have been the model for Wither’s lotterie. 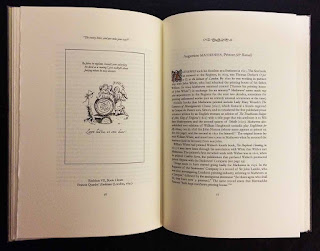 Like any leaf book, the format of L-V-G was determined by the size of the largest leaf. The text was set in Monotype Garamond (several sizes) on a page that measures slightly larger (8 x 12 inches) than Wither’s quarto. Like the books from which the leaves came, the type was inked and printed by hand, with a handpress, on dampened paper (Arches Text wove for the introductory material, Golden Hind laid for Wither’s commentaries). A number of decorative initial letters from A Collection were incorporated to the setting, along with various patterns made up from the single printer’s flower used in that book. In Series 1 and 2 copies, the initial letters (a total of nine per copy) have been illuminated with metallic bronze paint.

Aside from brief preliminary material, Rollenhagen’s book is entirely intaglio, printed rectos only. Wither’s book combines the intaglio plates with extensive letterpress on each page, and is printed on both sides; thus, one Wither leaf presents two emblems (recto and verso), while one Rollenhagen leaf presents one emblem (recto only). With these different formats in mind, L-V-G is being issued in three states: 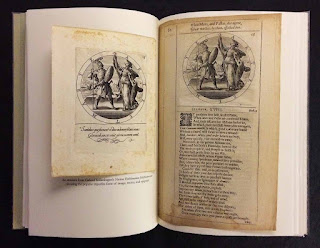 SERIES 1: Copies 1—16 with leaves containing the same emblems from Rollenhagen and Wither (i.e. two Rollenhagen leaves bookending a Wither leaf, presenting the same plate from each book side by side, as shown above), to allow for comparing the state and printing of the same plates. Also included will be a text leaf, from the preliminary notes and dedications in Wither’s book, as a frontis. These copies will be bound by Claudia Cohen in quarter vellum with Karli Frigge marbled paper over boards.

(* By advance subscription, copies 1—7 are being extra-bound by Claudia, with a vellum spine and gilt- & blind-tooled black leather over boards. These copies also include a second leaf of emblems from Wither’s book, opposite the colophon.) 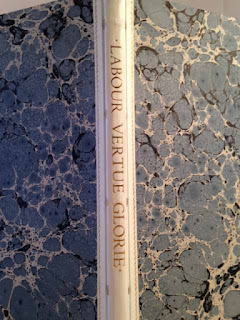 SERIES 2: Copies 17—23 with a leaf from Rollenhagen paired with the same plate on a Wither leaf (recto or verso, as the case may be). Bound in quarter vellum by Claudia Cohen with Karli Frigge marbled papers.

SERIES 3: Copies 24—48 with a leaf from both Rollenhagen and Wither (but no duplication of plates). Cased in decorated paper over boards at the HM studio. 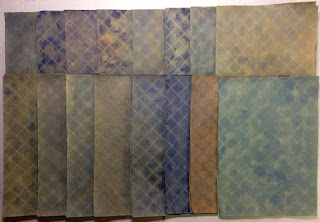 I’ve been telling people the papers used for the Series 3 copies was recently discovered at an Old Montreal customs house, in a basement room that had been walled off & forgotten sometime before WW I. That's a bit fat porky pie, but a fun story. They actually were made up at the studio, with acrylic paints and a grid of butcher’s string glued to a sheet of plexi. 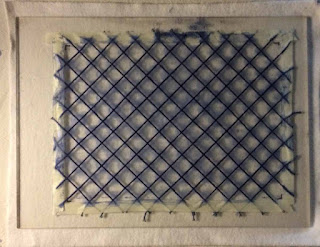 As usual, contact any of HM’s booksellers (listed at right) if you’re interested in acquiring a copy.

Looks like next in the press will be another double leaf book, this one featuring the Kelmscott & Doves presses and an essay by Alfred Pollard. Like to have copies of that out by the end of the year; see how we go. And then - in 2019? — the long-promised expanded, illustrated second edition of Fragments & Glimpses… 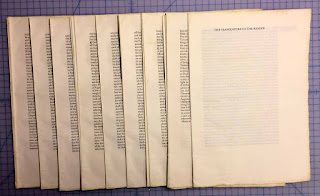