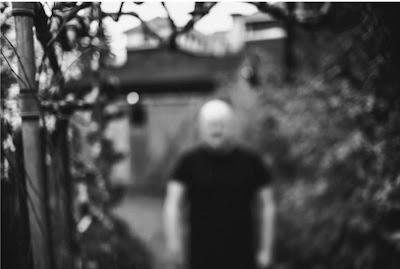 The blog of Seattle-based musician Tom Shear (aka Assemblage 23) recently passed along a mesmerizing recording, the sound of a dial-up modem slowed down 700%. Similar to the sound of a handpress at work, speeded up 700%? Either way, the perfect accompaniment for getting into a printing groove. 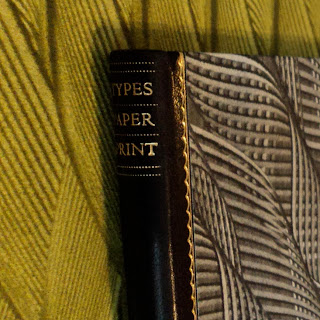 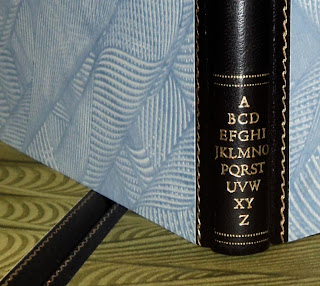 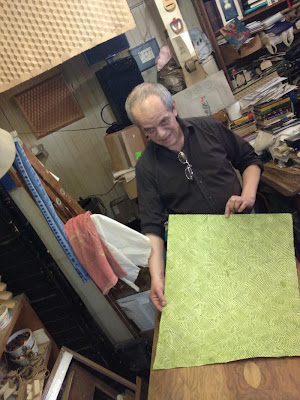 Saw Reg Lissel today. He showed off a sheet of the paste paper he recently made for the deluxe copies of the next issue of the FPBA's journal, Parenthesis. The base is his basic cotton sheet, about 200g, 18 x 27 inches (+/-). Not sure if they're being printed on or just folded up as jackets. Think that issue is due out around September. Reg's looking good; grinding through an order of HM Text (for someone else), then he's going to spend some time later in the summer making gampi.

Here's one of his cool folded-paper geometry sculpture creations. 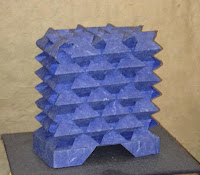 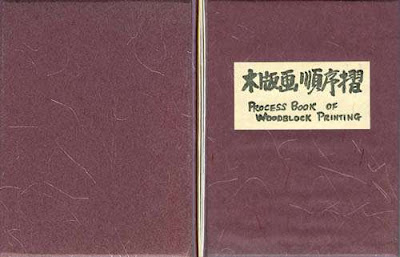 More explanations & details to follow at a later date, but much time has been spent cruising for printmaking technique/process books which include actual sample prints (not reproductions). Stumbled across the site of one George C. Baxley, primarily devoted to stamps but with a serious side interest in Japanese art, and thus Japanese wood-block printing. The site is a little tricky to navigate, but that's due to the tremendous amount of information included. Many of the process books he has on offer are reproduced in full, along with significant sections of text. A great site for anyone wanting a quick introduction to the medium.

Anyone out there with technique books that include actual prints, especially pre-1950, any language, please get in touch. Or just send them. 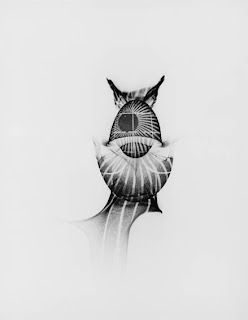 Back to work at the press, printing the second volume in HM's occasional Artists' Pamphlet series. My Dark Room is David George's two-tiered essay on his work with photograms, and the medium's  unexplored artistic potential. It also presents the first ever reproduction of his photograms - each of which is, by definition, a unique work, not a matrix for reproduction (like film would be) - as photogravures. Two different original photograms were reproduced from copper photo-etchings at New Leaf Editions. Each copy of the pamphlet will feature one or the other of these as a frontis. The ten Patron copies of the book will feature both. 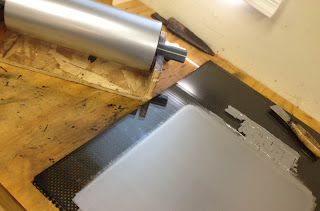 This project also marks our first experiment with using silver ink. Looks fantastic on the roller. The stuff we got was exactly stiff & tacky - runny would be the word. Not exactly how we like ink. However, rolled out, a little went a very long way: basically we just had to tell the roller the ink was in the room, and that was enough.

The next few days will be spent printing David's essay: one sheet, four pages, two colors both sides. One hundred & fifty impressions per day, which is a lot for a prosaic handpress outfit like HM. We'll see how it goes... 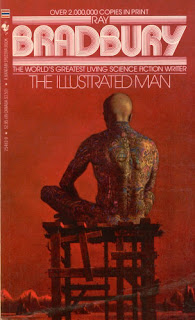 Just yesterday we were corresponding with someone regarding ongoing research into the printing and publishing work of Roy A. Squires, and mentioned in passing that Ray Bradbury seemed to be the last living author who had worked with Squires. And now there are none. Although Bradbury's writing has never grabbed us (most science fiction does not age well; in 1984 Neuromancer was a revelation, but try reading it now), one of his books is fundamentally responsible for HM's fall into book collecting, and ultimately into letterpress printing and publishing. In the early '90s a deluxe copy of the Lord John Press edition of The Last Circus & The Electrocution was on sale (half price; big deal - copies are still available from LJP) at Vancouver's Colophon Books (now long gone & much missed). It was coveted but avoided, as we knew that its purchase would lead down an expensive rabbit hole. Unfortunately, it appeared one day as an anniversary gift, and that was that. The stories didn't light big fires, but the book itself - the thing, the distinction of states within an edition - beguiled. It was printed by Grant Dahlstrom at the Castle Press (huh?), and the deluxe was on different paper than the trade - what the hell did that mean? Acquisitions quickly piled up, the distinction of letterpress printing introduced, the finer points of binding discovered, all eventually leading to the abandonment of a reasonably remunerative (but largely dull) career, replaced by the press and bench. With no regrets, and many thanks to Ray for helping tip us over the edge. 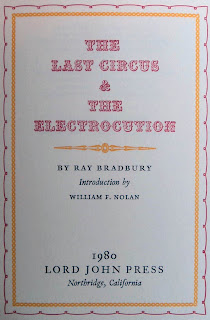