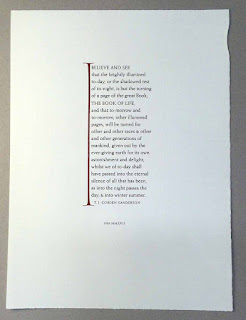 Haven't been completely lazy. Printed two broadsides last month, one for a symposium being held at UBC in the fall. They wanted something Victorian - not my favorite aesthetic, but it's their broadside (and it's appropriate for the symposium's focus). The border was ginned up from a stretch of vines in a Kelmscott book. I also printed a few copies of a different idea that was proposed (by me, above). 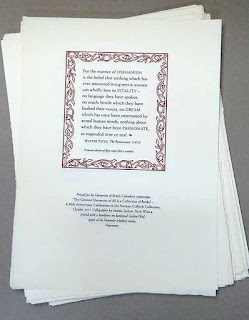 The broadsides were good exercise in advance of the Wither/Rollenhagen project, Labour Virtue Glorie, which will be a marathon of printing. It's almost ready for the press; doing final tweaks to the setting & layout. I've been stuck on the question of how and where to use a second color, in the context of a leaf book. How much should the book being published reflect, or at least not clash with, the aesthetic of the book(s) from which the leaves are taken? Pastiche is never a good strategy, but there must be cohesion. Wither's book used a lot of rules on every page; the layouts for L-V-G incorporated a head rule on every page, but it never sat right with me - it looked too much like some contemporary book from a university press. I removed it just recently, and the whole spread just opened up and breathed. 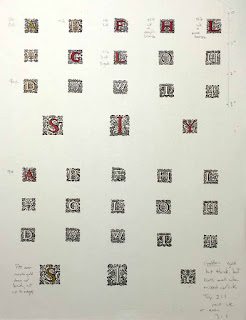 While waiting for a better idea, I had been setting the chapter heads in red - how exciting, another letterpress book with red as a second color. It was looking like a university press book with a generous enough budget for two colors! Again, neither Wither nor Rollenhagen used a second color in their books, but leaving everything just black seemed a bit grim and boring. 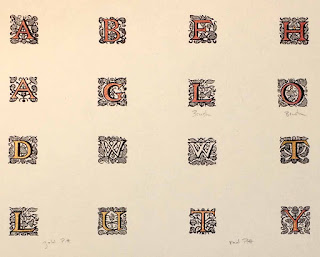 It takes me a while, but I usually get there: I had incorporated three-line initial letters, taken from Wither's book, into the layout for Labour Virtue Glorie (chapter openings). The original woodcut letters are open - I could just hand-color them! I did a few tests with different media and tools, and it's looking good. Metallic acrylic paints (the ones I used to decorate the Aurora Teardrops cases) work well. I experimented laying them over a flat (red) base. There are nine letters in each copy, so I may end up only doing them all in the deluxe copies, and maybe just the first in the regulars. We'll see.