The Origin & Progression of Printing... 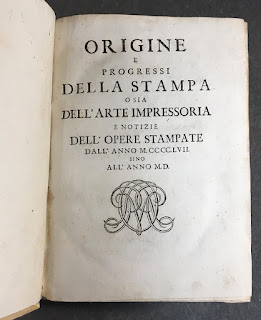 I found several cool presents under the Xmas tree last week. One both was & wasn't a surprise: a copy of Pellegrino Orlandi's Origine e progressi della stampa o sia dell'arte impressoria e notizie dell'opere stampate dall'anno M.CCCC.LVV sino all'anno M.D. (Bologna, 1722). It wasn't a surprise because I'd ordered it, from an Italian dealer, in September. It was a surprise because getting the export license took so long that it arrived just days before the 25th, so I delayed opening it & called it a present (even though it's for work).

(In Italy, all books published more than 50 years ago require an export license. Other countries have similar restrictions, but typically applying only once a fairly high minimum value is exceeded. Not so in Italy. Some booksellers charge a fee for acquiring this license, some don't, some won't even make the effort. Italy not being known for an efficient bureaucracy, securing this license seems to involve repeated visits to a regional office, i.e. badgering whoever has control of the stamp. I was lucky that the bookseller who had this copy of Orlandi was willing to do the legwork.) 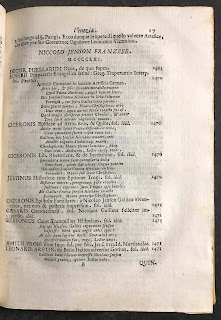 I had encountered the book's title in various sources while doing research for this year's Francesco Griffo project. I found a scanned copy online, and despite the poor reproduction, the book intrigued. To the best of my knowledge, it is the first Italian history of printing during the incunable period, attempting to list all of the printers of books active up to 1500 in Europe (i.e. modern Italy, Spain, Holland, Belgium, Germany, France and England). The first half lists printers by city, and the titles they published (shown above is the first page for Jenson's listing). A short middle section provides some information about printing, the casting and use of type, and five pages collecting a total of 94 printer's marks (#5, in the image below, is Aldus's). The second half of the book seems to be a list of all incunable editions, alphabetized by author's name, e.g. all known editions of Ovid's Metamorphoses published before 1500. 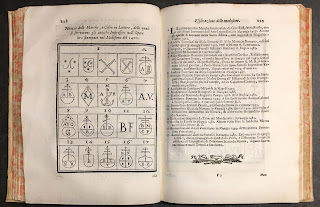 I have not been able to find much information about Orlandi, beyond him being a Carmelite brother who is perhaps best known for Abecedario pittorico, an encyclopedia of 4,000 painters, sculptors and architects. I can also find little information about the printer of Origine e progressi, Constantine Pisarri. I don't know why his imprint does not appear on the title page of part 1 or 2 (he is mentioned on the penultimate page, in the publication privilege, and his mark CPB appears on the final page). His relationship with Orlandi seems to date back to at least 1704, when he printed the first edition of Abecedario pittorico. He printed other books by Orlandi in 1714 and 1719. 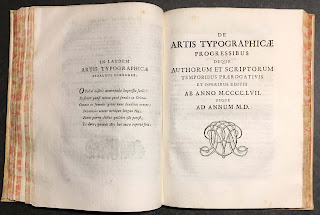 The Neue Zeitungen von gelehrten Sachen from 1724 includes a brief description of the book (in an impenetrable fraktur), including the comment that Orlandi "found more old books in the Italian libraries than Maittaire found in the English and others." Maittaire was Michel Maittaire, who undertook a similar project, written in Latin and published in London in 1719 (subsequent volumes followed). 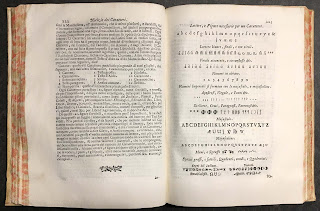 The book is not terribly well printed - probably about average for the time and period - but the setting, variety of types used, format (a wide quarto), and quality of paper make up for the presswork. I particularly like the face used to set the city names... 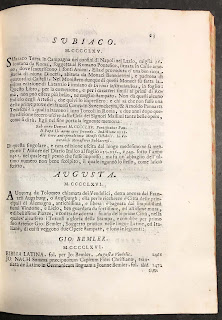 My Italian could not even be generously called basic, so I will be making my way through Orlandi very slowly. While that can become frustrating, I also find it enhances my enjoyment of the book: because I'm forced to proceed slowly, I see each page more thoroughly. Despite the wealth of information it contains, and its appeal in purely typographic and bibliophilic terms, the book does not seem to command high prices. A copy in what sounds like reasonable condition is currently listed online for about €400. So that's it, merry Xmas to me from HM. I got another cool book, but you'll have to wait a few months to see that one... 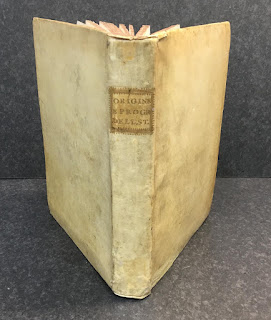 Graphic designer Vaughan Oliver died last month. I've written about his work and influence before - it was his inner sleeve for the compilation Lonely As An Eyesore (4AD 1987, shown below) that first opened my eyes to graphic potential of type. He tended to lose his footing when he strayed into book forms, primarily because he didn't understand do's and don'ts of binding, but his album covers were brilliant. 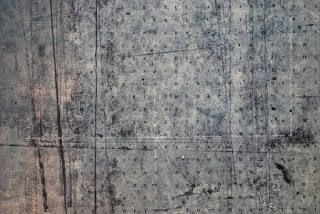 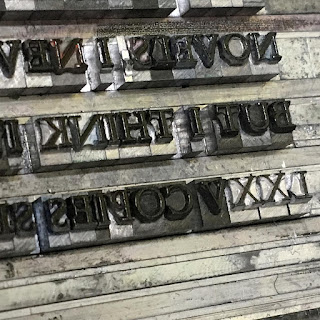 Busy printing today. Come back in a day or two and I'll have this month's post up...