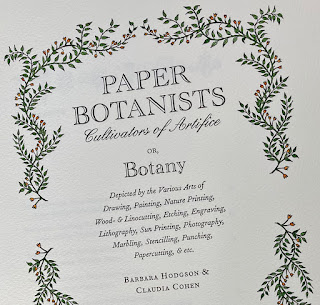 Sometime toward the end of this month copies of the debut publication from a new Canadian private press will begin shipping from a bindery (in Seattle). Titled Paper Botanists, it is the latest collaboration from Barbara Hodgson and Claudia Cohen, and continues their tradition of delving into specific topics related to the graphic arts, richly illustrated and elaborately produced. It is also the first of their books published by Barbara’s own imprint, Byzantium. 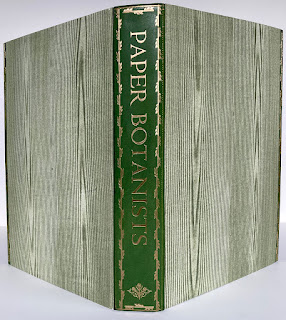 Like all of their previous collaborations, Paper Botanists delves into an aspect of the graphic arts that appeals to their shared passion for history, materials, methods, and interesting stories. The book charts the history and development of how plants have been represented by artists who struggled to capture realism while aiming for an aesthetic ideal. The books chapters explore the primary techniques that have been used for visually recording flora, from herbaria (pressed plants) through drawing, various forms of printing, to photography and photomechanical reproductions. The text of each chapter is accompanied by a wealth of examples of techniques, about 140 in total. Some of these are historical pieces that the authors (primarily Claudia) have collected in sufficient number for the edition (the oldest included is a hand-colored woodcut from a mid-16th century edition of Hieronymous Bock’s Neue Kreuter Buch), some are illustrations printed with the text and then hand colored (e.g. all colors except black on the title page, at top, were applied by hand), and some are original prints by Barbara, tipped in. 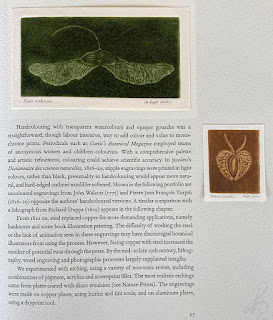 “Since at least the 1980’s I’ve been buying herbaria as well as books, prints and drawings of a botanical nature, for pure pleasure,” Claudia says. “When Barbara and I began contemplating this project, more than two years ago, I started scouring eBay sites – British, American, German and French – for ‘orphan’ lots of botanical images from books, as well as interesting, affordable botanical tomes that were usually falling apart or incomplete wrecks/remnants. I also found items in Dutch auction house catalogues. Paper Botanists took shape as many thousands of samples accumulated. We chose what was best and I continued to search for specific samples where they seem to be needed.” 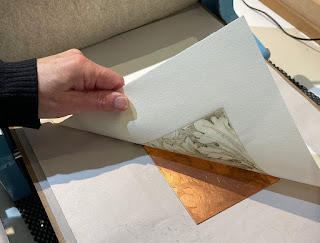 A few years ago I purchased a small etching press, thinking I might get around to printing a book that combines letterpress and intaglio on a page. I never did and it was taking up space. In the early stages of developing Paper Botanists Barbara borrowed it to play around and found she had a talent for printmaking (quel surprise). So she adopted the press and ran many hundreds of sheets through it over the past two years, both relief and intaglio, which are included as samples in the book (see bottom of this post for more about her printmaking).
One of the first questions that must be answered when designing a book that will include leaves or samples from other sources, especially a variety of sources, is page size: is it dictated by the dimensions of the largest leaf? Folding samples down isn’t always ideal, especially if two perpendicular folds are required. “I try to be prepared to accommodate samples in ways that show them at their best; in other words, in proportion to the book and without trimming or folding. However, it is next to impossible to exclude an important example just because it does not fit as anticipated. The best way to get around the issue is to remain flexible about the book size for as long as possible,” Barbara says. 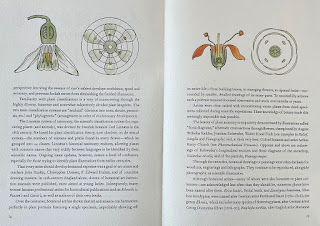 Byzantium is the imprint Barbara established in the mid-1990s, when her career expanded from commercial book design to creating her own works. Over the next 14 years Byzantium packaged her four novels and 11 non-fiction books, along with titles by other authors. Those last few years overlapped with an introduction to private press publishing by way of her first collaborations with HM: Good & Evil in the Garden and EXPRESSed: Ten Philatelic Fictions. When HM editions was wound down after the publication of their last book, PatternPattern, in 2019, Byzantium was revived with a new focus. 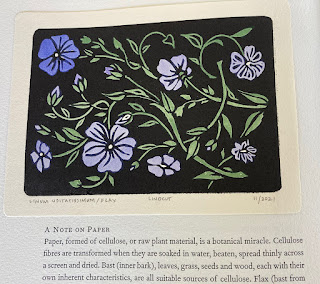 My introduction to Barbara’s work was her debut novel, The Tattooed Map (1995). It wasn’t simply a text with accompanying illustrations, it was a book in which the author tells the story with a combination of the two elements. The imagery included original works by Barbara, found items, and collages. Her talent for combining visual and textual elements to create a narrative continued to develop in her subsequent novels, The Sensualist (1998) being my particular favorite. By their very nature her non-fiction books were more traditional in the use of images to support the text, but her passion for deep historical research (finding the most obscure images possible), and her additional role as designer, created lively and engaging works on topics ranging from soporifics (In the Arms of Morpheus, Opium) to peripatetic feminists (No Place for a Lady, Dreaming of East). Barbara’s trade books were expensive to produce – all that color printing, plus die-cuts and other tricky bits in some of her novels. By the mid-aughts the publishing industry was severely contracting (Vancouver’s Raincoast Books went from being one of the country’s largest publishers to defunct within a year of Harry Potter – on whom the company’s entire wealth seemed to stand – vanquishing Voldemort). Barbara was finding more labor, less joy and less remuneration in the work, and designing other people’s books had lost its appeal. Without it being an entirely deliberate decision, she started focusing on books that would fall under the general heading of “fine press.”

Part of this move was the association with HM, but an equal influence was connecting with bookbinder Claudia Cohen. The two discovered shared passions for all things graphic and a steady stream of ideas for engrossing projects. Their first was The Temperamental Rose, which presented, and expanded on, intriguing references to color from Western sources. For example, Dante’s The Divine Comedy was represented as a hand-colored pop-up of Purgatory as a pyramid. It was colored with the hues used by Dante in his descriptions of the seven levels that mark the rise from the Inferno to Heaven. 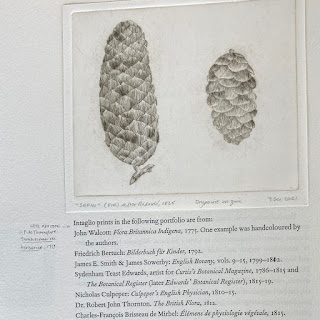 The edition for Paper Botanists is 30 copies plus six artist proofs (i.e. hors commerce), which has been established as the upper limit for how many they can reasonably produce, given the amount of adornment to the printed sheets and the number of historical samples that must be sourced for inclusion. It was designed and set by Barbara in Fournier, printed at HM on dampened Arches cover, and bound & boxed by Claudia. The book will be issued in two states, each with an accompanying portfolio of additional samples: 20 copies will be bound in quarter leather with paste-paper sides (shown at top of this post); 10 will be extra-bound in full leather with additional samples. 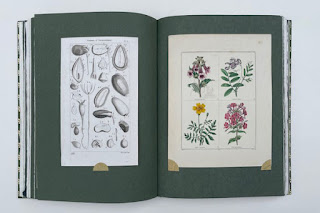 Some cataloguers have referred to their books as “artists’ books,” but it’s not a term they use. “I think of our books as traditional BOOKS, not ‘artist books.’ But it’s like a discussion about religion: there is no conclusive answer and everyone decides for themselves," Claudia says.
“The term suggests a focus on art at the expense of words, which is the opposite of what we are trying to achieve with our books,” Barbara says. If forced to adopt any label, she would accept private press – books by and for the primary enjoyment of the creator. Sustaining this enjoyment is one reason the editions are kept to only 30 copies.

“The original goal of being able to devote unheard amounts of time on painstaking original work continues to hold its appeal. Paper Botanists reaffirmed the pleasure of such labor. In the past, I would occasionally consider slightly increasing the number of copies of a new work, but 30 copies continues to be the realistic maximum, ” Barbara says. 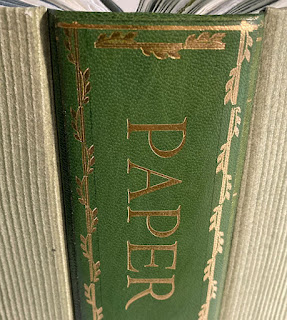 Too often the small editions and cost of books like the ones they have produced are the first thing remarked upon by people who think all books should cost the same and it shouldn’t be much. Strangely these people don’t have the same reaction when discussing other art forms, such as painting (which by definition is much more exclusionary, there only ever being an edition of one). To this Barbara counters that many of their books end up in the kind of institutions whose purpose is to make them accessible.

“To those who ask why our books aren’t more widely available, I suggest, if it is feasible, to visit one of the libraries that hold one or more of our books. Even though the books are held in Special Collections, getting to see them usually isn’t as difficult as it sounds, as librarians are generally pleased to be able to show books to interested patrons. There are also fortuitous encounters: I was astounded by the number of people from all over North America who told me they had seen The WunderCabinet on exhibit at the Huntington Library.”

Details for Paper Botanists can be seen here. Copies should begin shipping by the end of this month.
AND ANOTHER THING!
Next month HM=XX will be out, so I'll show some pictures & etc. Also, RIP Philip Jeck (see link at right).
APP. 1: BOTANICAL PRINTMAKING
A few of Barbara’s adventures in printmaking that are included in Paper Botantists... 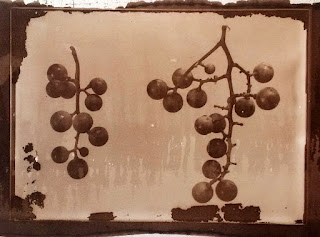 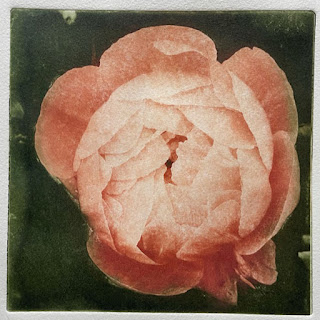 Image from a stochastic plate. The multiple colours on the plate are applied at the same time for one pass through the press. A sap green/ umber mix is put on in the background, then wiped; a carmine red/ Indian yellow/white mix is put on the flower area, then wiped. A bit of green fading into the edges of the petals helps give them a transparency. 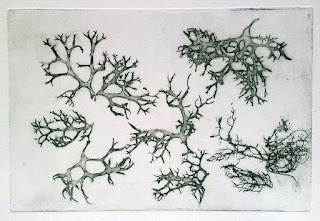 An etching on thin brass. 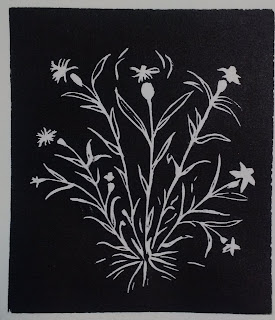 A linocut adapted from a section of an illuminated manuscript of Bocaccio’s Famous Women. 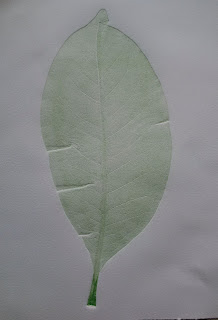