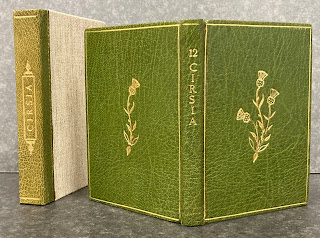 I have a new strategy for posting when there’s not a lot of news coming out of the studio. More by coincidence than intent, over the years I has acquired a number of publications by well known people and presses, which were issued as a very small edition. So small they could almost count as hors commerce “just for fun” projects, except some copies were sold or found their way into booksellers’ catalogues. For the inaugural post in this occasional series, Barry Moser’s Cirsia.... 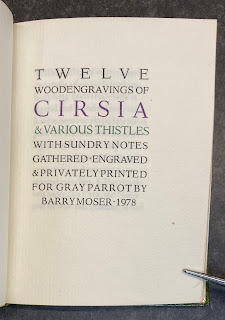 This is an interesting project on a number of fronts. It a sort-of collaboration with the binder Gray Parrot, who bound some of Moser’s Pennyroyal books in the 1970s. As such, it’s a small-scale example of Pennyroyal at its most luxe – typography, art, printing, materials, binding. I’m a big admirer of Moser and GP, plus I like botanical art and uncommon books of just about any type. 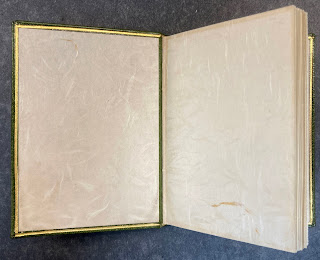 To be accurate, Pennyroyal is nowhere mentioned or credited. The book is included in the Miscellany section of the 1986 Pennyroyal checklist. 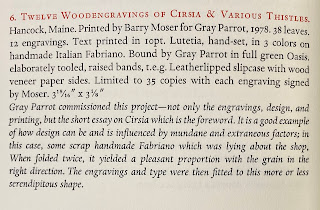 The title on the spine is 12 Cirsia. Each of the engravings is preceded by a page with the plant’s Latin name printed in green. Five of the 12 engravings are black line, the balance white. 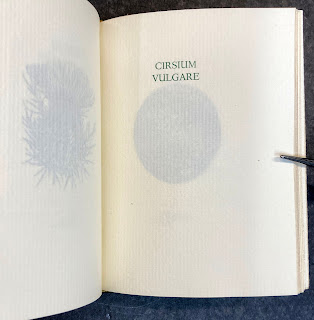 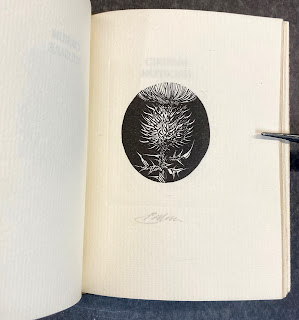 The plates (as they are called) are preceded by seven pages of notes on the topic, freely adapted from Field, Forest & Wayside Flowers by E.M. Hardinge (1899). Books like this always have to find some text, however brief and/or tenuously relevant, because no one seems to want a book of just prints. People want there to be some text, just so they can skip over it and get to the prints. 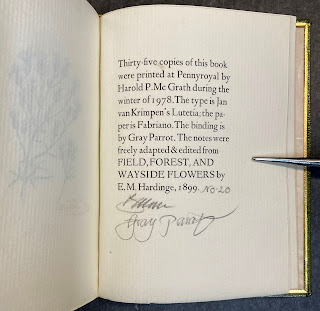 The production details are laid out in the colophon, which is signed by Moser, as are each of the prints. Another piece of lovely Harold McGrath printing. The binding is everything you would expect and want in a GP binding. 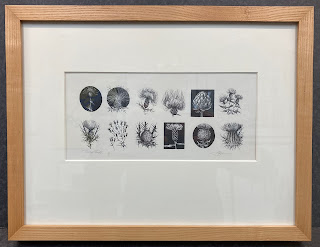 My copy of the book came with a proof sheet of all 12 engravings, which has been one of our favorite pieces since it went on a wall. 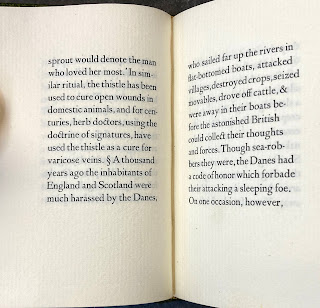 I especially like that, even in a project of such comparatively small scope, people like Moser and McGrath can let a setting error escape their attention – that were a wrong sort. Makes me feel better about all of the ones I’ve racked up... 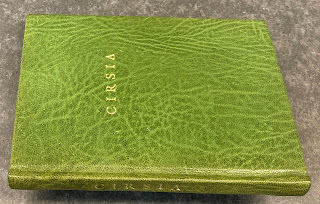 Now here’s an odd addendum: I have a second copy. It looks to have been made up from proofs or waste sheets. It has just 11 engravings (Cirsium virginianum – the one shown top left on the proof sheet – is lacking) and there are some odd blanks in the collation. The engravings all look good but some of the text pages are slightly under-inked. The colophon is signed by Moser but not the individual prints. Interestingly, it includes a half-title (which is followed by a blank) that does not appear in my numbered copy from the edition. 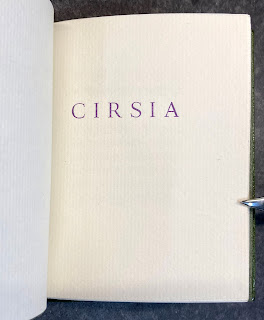 The binding is a puzzle too. The leather is similar to that used by GP, but not exactly. The spine’s head and tail are rounded, like GP’s, but the actual spine is flat; little or no attempt was made to pare the leather. The endpapers are tipped on (boo). 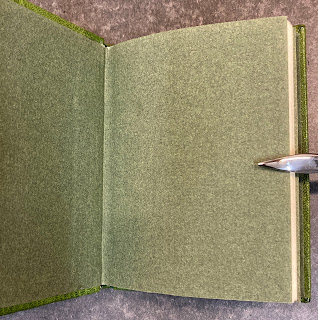 The endbands are made, not sewn. The head has been left unadorned. The book does not want to stay open. Overall it looks like something done by an amateur with some skills but new to leather, maybe someone who took lessons from GP using sheets he pulled out of his recycle bin.
AND ANOTHER THING!
After this post first went up, one of HM’s friendly correspondents wrote to say he also had a copy of Cirsia and that it differed in several ways from mine.... 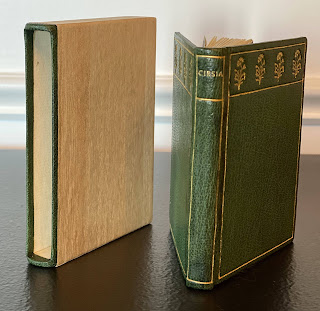 The leather looks the same, but the tooling is completely different and it has a (very attractive) slipcase instead of a clamshell box... 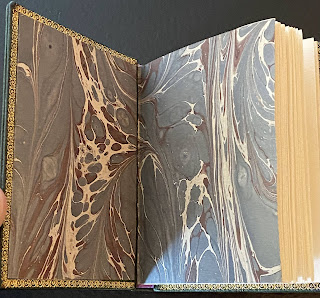 and the endpapers are marbled, not Japanese. So it seems Gray was having fun as he bound the edition, trying different things, which maybe was part of the project’s purpose & appeal for him in the first place.
IN CONCLUSION...
There will always be someone who moans Why did they make so few copies? and/or Why does it have to cost so much? I do not have the patience or ability to explain in a way that would help them understand. Part of the appeal of a project like this is you’re just making copies for yourself and a few people you think might share your enthusiasm for it. And the short answer to why so few copies is the amount of labor involved in making each copy. It’s not a question of just keeping a machine running for a few extra minutes. As I make my way through sewing copies of HM=XX I frequently think 40 copies is more than I have the patience for. It takes forever to sew just one copy, due to all the odd sample sheets incorporated to the text block. Good thing I bought the boards last year: apparently mill board is becoming a scarce commodity across North America. 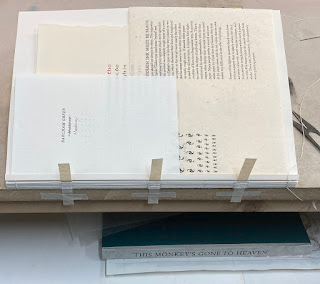 So, obscure or – better still – unannounced or anonymous publications from interesting presses are almost always worth keeping an eye open for. Maybe later this year I’ll be able to write a post about Gray Parrot’s impossible-to-find marbled paper sampler (I don’t have a copy, but I know where one is...).