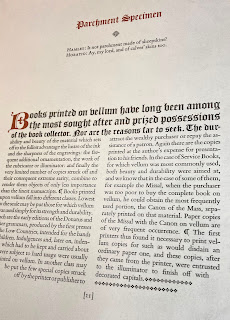 When someone starts getting interested in letterpress and fine printing, they pretty soon become enamoured with the idea of printing on vellum. Much of the attraction is down to the mystique of vellum* – its cost and related scarcity, and its tactile qualities. Depending how much knowledge acolytes have acquired, they may also appreciate the difficulty of printing on vellum, and the sheer terror fear of wasting a skin with a bad impression.

I have no idea where one could acquire vellum appropriate for printing these days, and don’t want to know how much a sufficient quantity for even one copy of a book would cost. I guess I’d ask a calligrapher. Vellum suitable for binding is expensive enough, and the kind suitable for printing is much finer. 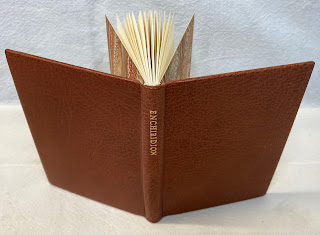 Printing a few copies of a book on vellum has been part of printing since the first Gutenberg Bible, presumably a sop to patrons with libraries full of manuscripts. In the early days of the fine press revival, copies on vellum were the cream of the cream. In 1977 the Bridwell Library boasted of having secured copies of the so-called fine press Triple Crown – the Ashendene Dante, the Doves Bibles, and the Kelmscott Chaucer – all printed on vellum. The practice dwindled as the century progressed; in this list of known publications on vellum printed in the United States, you can see the gap between the 1950s and '80s. Of the three American presses listed in that revival, if it can be called that, the Petrarch was the most ambitious. That imprint was started by Peter Bishop in 1985 and published eight titles over the next decade, all printed with a handpress. The imprint was revived after Bishop’s death in 2002, and has continued to print a few copies of each title on vellum (i.e. parchment; I won’t address that distinction here...). 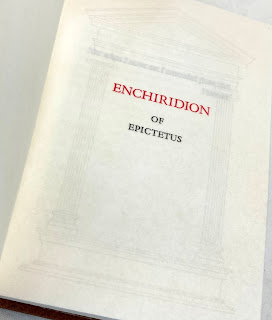 All of which brings us to the latest instalment in the Handpress Library: Petrarch Press’ 1989 edition of Epictetus’ Encheiridion, printed on vellum (i.e. sheep skin parchment). The printing is enviously consistent and wonderfully black without being over-inked. The leaves may be slightly more transparent than ideal, but not to the point of distraction. The edition was 160 copies, eight on parchment, mine elegantly bound in brown goat with just the title tooled on the spine. 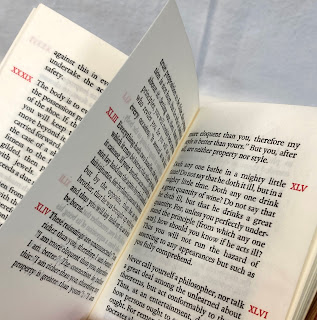 I don’t think this was the first book on vellum I owned: that would have been the De La More Press’ edition of The Prince. I bought it from a catalogue (i.e. sight unseen) in the late ’90s, for about $1,000, which would have been a lot of money for me, but I was in the new-to-printing, beguiled-by-vellum stage. It wasn’t really that lovely. If I recall correctly, the type looked over-inked (De La More was one of those quasi fine presses, like Nonesuch, which claimed to combine fine-printing ideals with commercial methods; I'm sure The Prince’s edition of 1,040 copies was not printed on a handpress, which accounts for the indifferent result). The vellum-over-boards binding was inelegant, and the black lettering on the spine just looked cheap. Plus, my copy arrived with a busted spine, which robbed much of the joy. I used it to acquire something more interesting within a few years. But I didn’t get eight grand in trade! 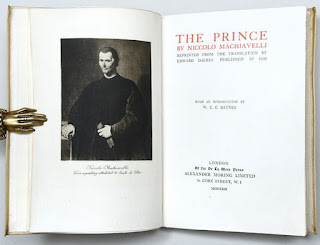 One question I’ve never answered unequivocally is whether printers dampened vellum before printing, as they would (should) paper. Anyone familiar with vellum knows how it reacts to the slightest change in humidity, so I’m not sure how one would dampen a skin, or if it even helps the impression (as it greatly does with paper). Rummonds, our best contemporary resource for letterpress questions, offers just a page and a half on the subject, and gives most of that to the Kelmscott pressroom overseer: place a skin between (not very) damp blotters for 30 – 45 seconds immediately before printing. The chapter’s unspoken sentiment seems to be, you’re on your own, good luck. 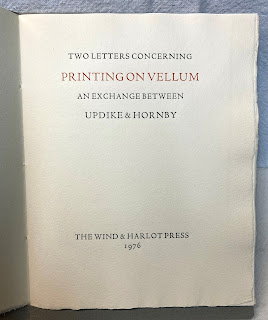 Robert Baris’ Wind & Harlot Press issued a pamphlet on the subject in 1976 (25 copies, re-printed as a miniature in 1992, 23 copies), printing an exchange of letters between D.B. Updike and St. John Hornby in which the latter reported he printed his vellum dry.
In the end, the appeal of printing on vellum comes down to decadence, which on its own isn’t that interesting, and is why my interest in books printed on vellum has been attenuated. For the premium placed on a vellum copy, I’d as soon have one printed on good paper and the extra money in my pocket. The closest I’ve come to printing on vellum is Reg Lissel’s vellum paper, made from over-beaten abaca. It’s remarkably similar to vellum in feel and toughness. I used the quick damping between blotters technique, and significantly more impression than would have been required for a rag sheet of comparable weight. If I was presented with a stack of vellum sheets, I don’t know that printing on them would be my first inclination. I’d be more likely to have a calligrapher do something lovely, and tip a sheet into copies of a book.
* The Mystique of Vellum is the title of Richard Bigus’ bible on the subject, published by Bromer Booksellers in 1984. Copies can still be had, at not much beyond publication price, and each one includes a sheet printed on vellum (shown at top of this post). The April 1987 issue of Fine Print has a fascinating article about binding the 12 copies of Mystique that were printed on vellum, which discusses the challenges of working with vellum quires, and underscores the importance of consulting for printers to consult with their binder before production starts.
AND ANOTHER THING! 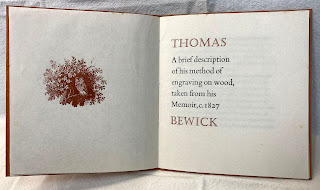 I forgot to include one of Will Rueter’s publications in last month’s post about printing Bewick’s wood engravings: A Brief Description of His Method of Engraving on Wood, Taken from His Memoir, c.1827. Edition of 100 copies published in 1978, a single signature sewn in wraps. Not sure what the two blocks included are from, probably metal cuts, he’d have mentioned if they were original blocks. Beautifully printed on mulberry paper.
GOT AGRIPPA?
Justine Provino, a graduate student at Cambridge, is working on a thesis about Agrippa (A Book of the Dead), including a census of known copies. If you have one, or know where one is, send her a note: agrippa[at]english.cam.ac.uk