Gazing Down, Listening to Sea Island 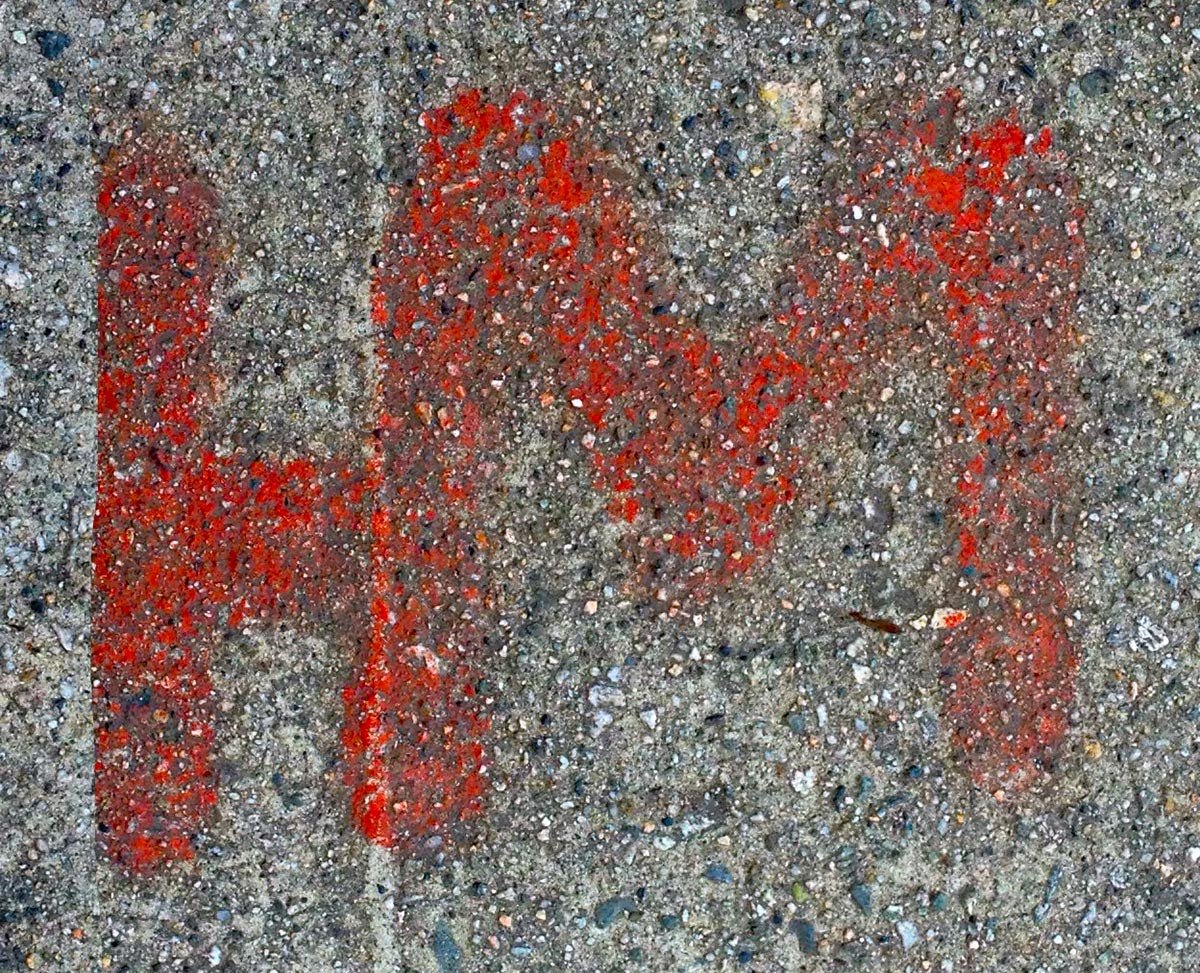 Crazy week. Got a good topic for next week's post, but meanwhile, a few placeholders...

Found that image above on a neighborhood sidewalk. 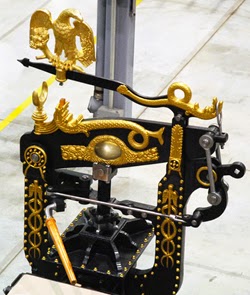 Heard about this place in, of all place, Ontario. Need to find out more. (The presses look a bit too pretty...) 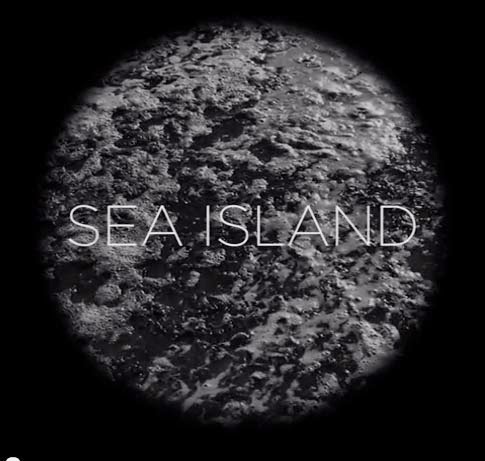 loscil's new album is out & it's brilliant. Another high for existing fans, a great point of entry for new ones. Everyone buy a copy.

Coming up next week: 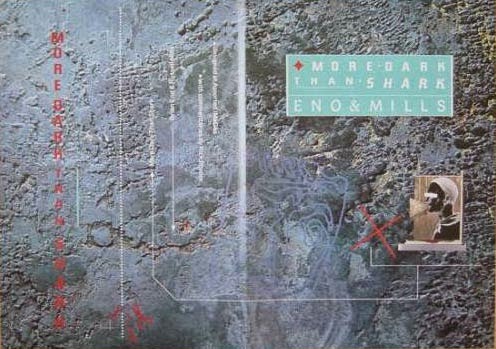 Some actual publishing news from HM, thanks to the ongoing work of Barbara & Claudia. 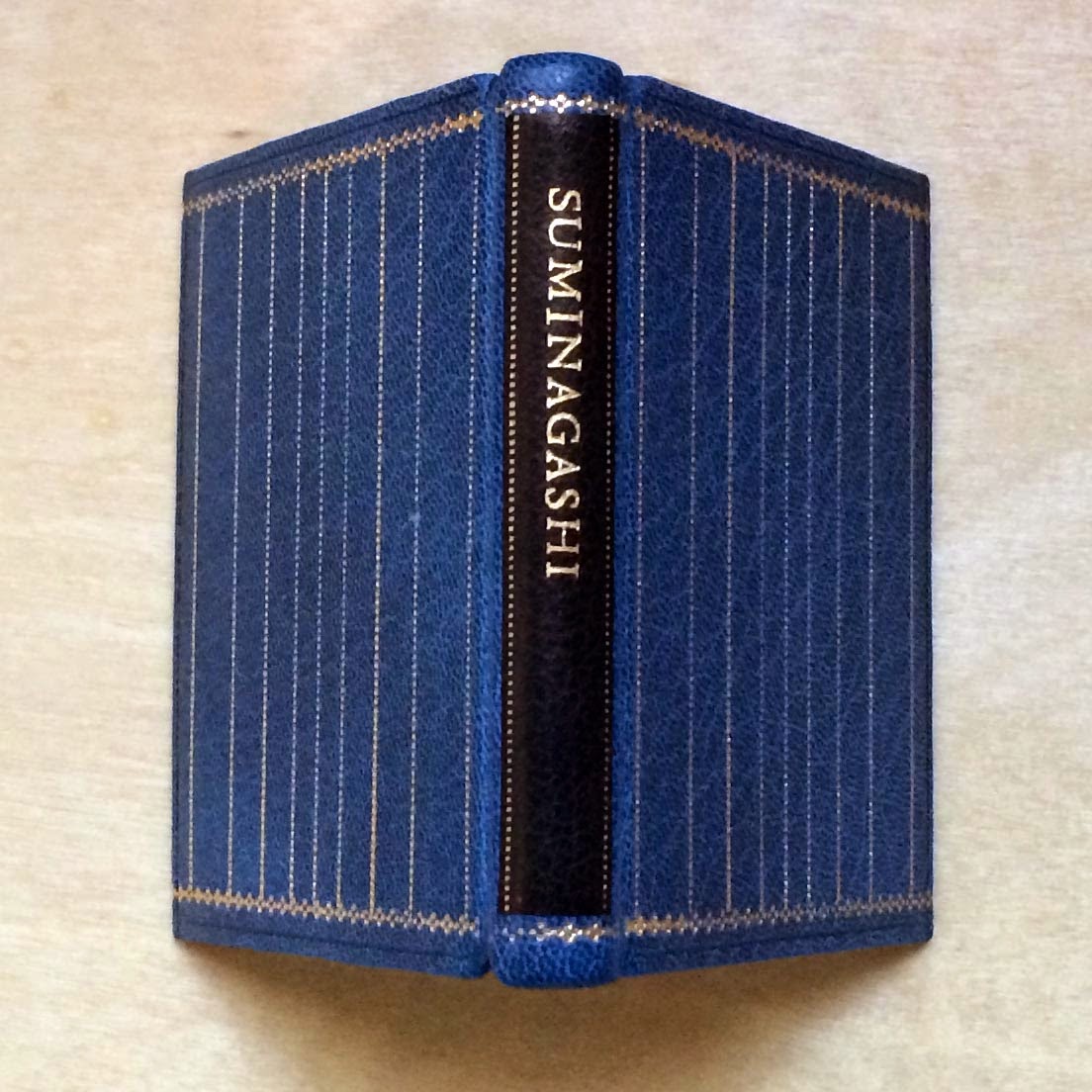 Copies of Suminagashi have been shipped out. Claudia's binding is lovely, especially considering she's not a fan of the miniature format. The blue leather is tooled in gilt and - the real testament to her skill - the thinnest blind rule just at the edges of boards. 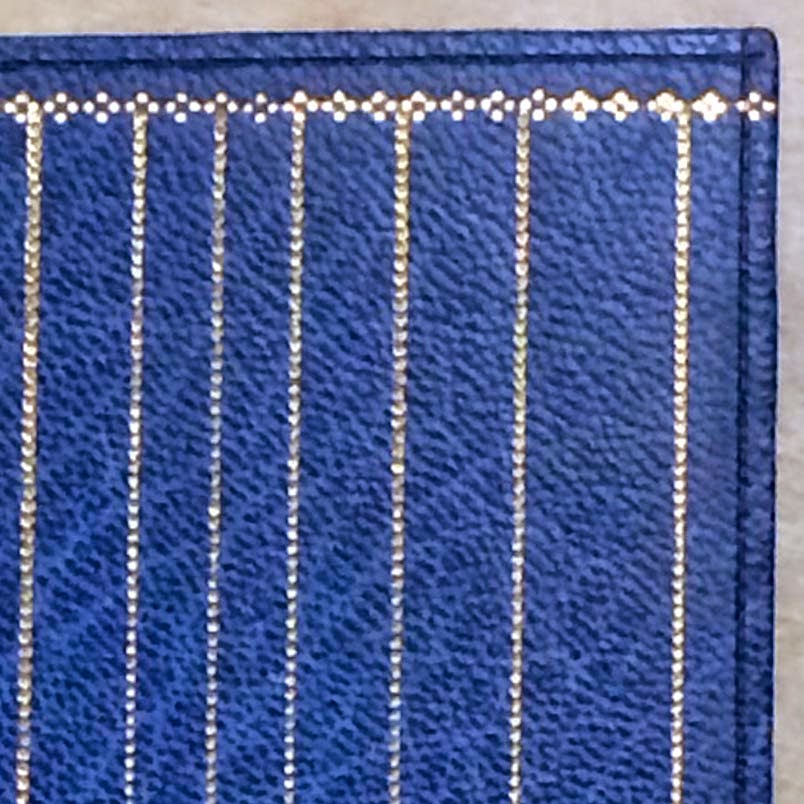 Inside, following Barbara's brief text on technique, we find her suminagashi experiments on different kinds of gampi, alternating between leafs [really? not leaves? is this a technical distinction?] of Whatman handmade paper (the same as used for the text) from which a letter has been cut out - S U M I N A G A S H I . 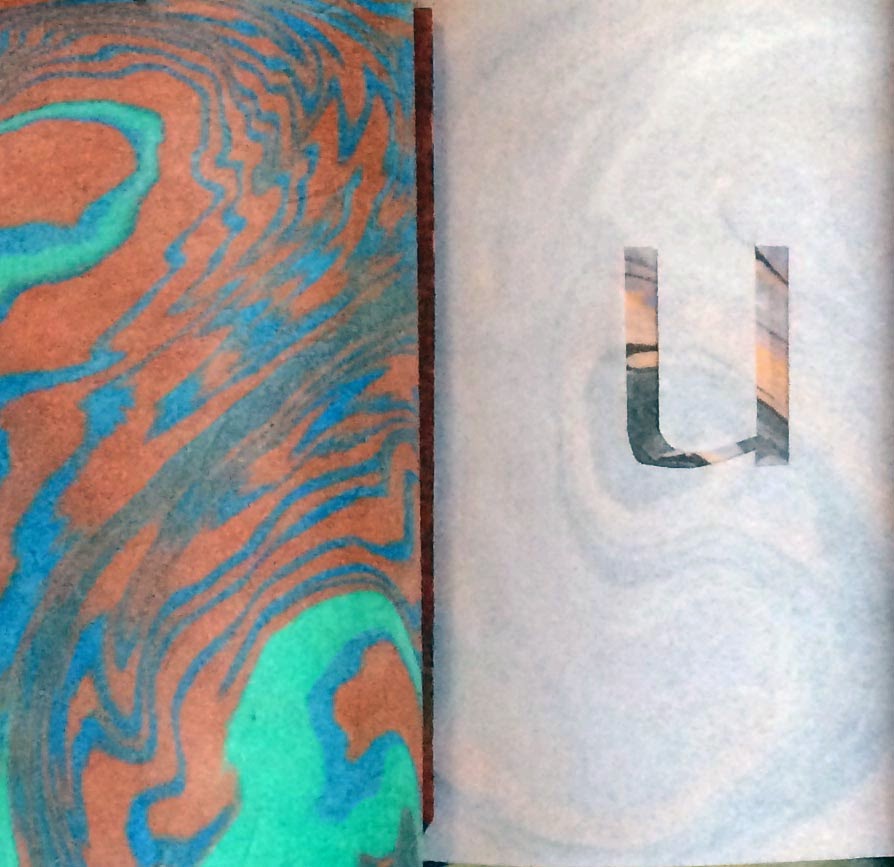 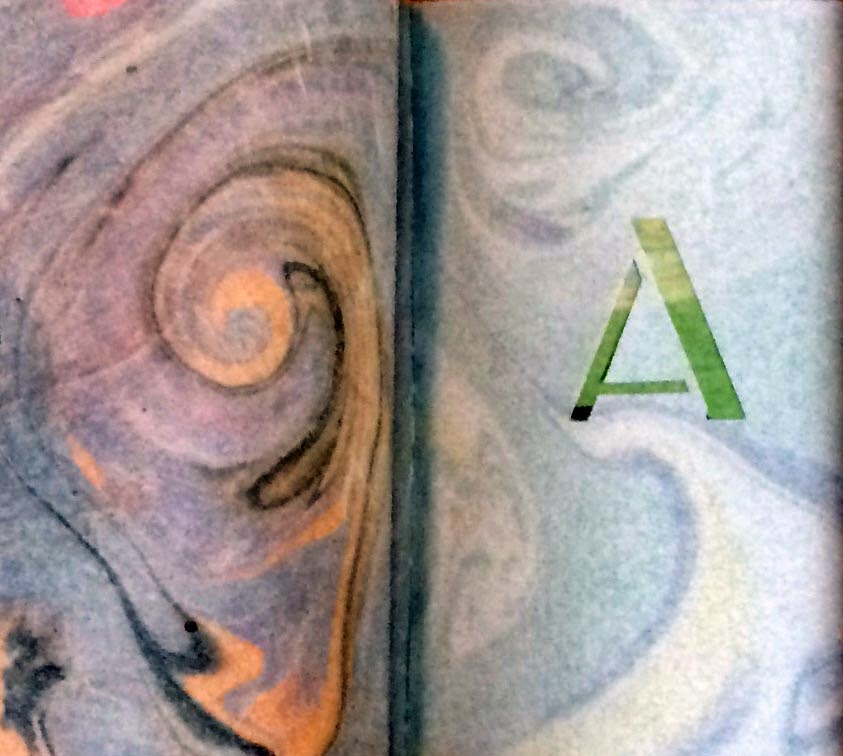 Going out this week is the prospectus for their next major collaboration, Decorating Paper. It was printed by David Clifford at Black Stone Press, who will also be printing the bulk of the book (some pages with simple specimen borders will be printed at HM). The cover of the four-page prospectus features 12 different examples of decorated papers tipped on. The book is described as follows: 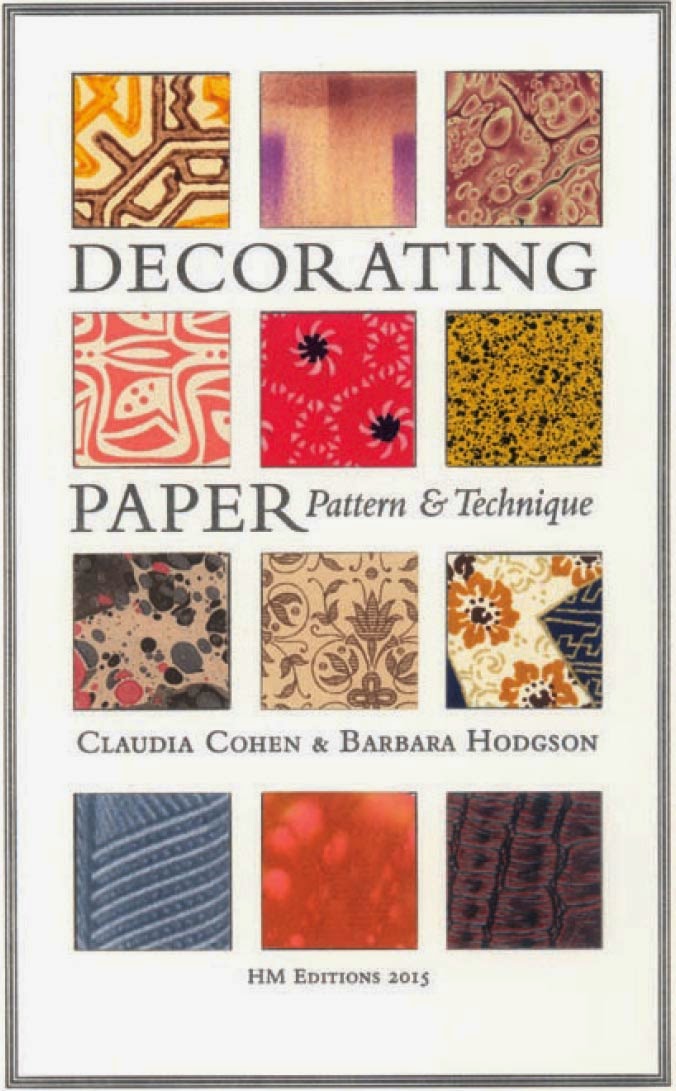 Decorated papers are the focus of the next book from the creators of The WunderCabinet, Cutting Paper and the four-volume colour series: The Temperamental Rose, After Image, Occupied By Colour and Around the World in Colour.Decorating Paper: Pattern & Technique will feature more than 600 examples of patterned papers from Europe, Asia and North America.

Original samples of marbling, paste decoration, embossing, pulp manipulation, lithography, block and linocut printing, stencilling and airbrushing from the 19th and 20th centuries will be found, along with contemporary examples (some made specially for this book). A sampling of Dutch gilt and block-printed papers from the late 1700s to early 1800s will also be included. The text (approximately 80 pages) spans two volumes, interspersed with the many samples, and includes descriptions of techniques and history, along with an extensive bibliography.Decorating Paper will be designed by Barbara Hodgson. The text, set in Bembo, will be printed letterpress by David Clifford at Black Stone Press on Arches mouldmade paper.

The two volumes (9.5 x 12.5 inches, each approximately 120 pages, including full-page samples and multi-sample specimen sheets) will be bound by Claudia in decorated paper over leather-edged boards with a leather spine and housed in a clamshell box. The edition, issued in one state only, will number 30 copies signed by Barbara and Claudia.

Decorating Paper will be available in late spring 2015. Please write for details or to reserve a copy.

Copies of the prospectus are going out to HM's regular customers and patrons. With the project's scope, the cost of materials and samples being assembled for inclusion, and the time and resources being invested, this will be Barbara and Claudia's most substantial publication to date, even if compared to the monumental Cutting Paper and multi-faceted The WunderCabinet. Reports and images of the book's (books' ? Is a two-volume publication singular or plural?) progress will be posted here as & when.

The annual East Vancouver Culture Crawl is happening this coming weekend. A new event added this year is the outdoor screening of six short videos by participating artists, one of whom is HM friend & former collaborator Andrea Taylor. Very kool. 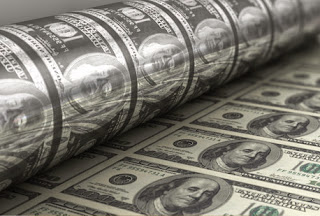 You'll get that title after the next paragraph...

In last week's annual food issue of The New Yorker, Adam Gopnik wrote an article about the transition of pastry cuisine from a tradition-based craft, successfully repeating the same result from a few simple ingredients, to the current fad for innovation and personal creativity. (He focuses on the pretzel croissant and Cronut to tell the story.) It struck me while reading the article that it could just as easily be about the role and place of letterpress printing in contemporary society, simply told using baking as a metaphor. It's the difference between an exercise in typographic & printing austerity versus a form-bending "book object." Cobden-Sanderson vs Keith Smith. Croissant vs cupcake. 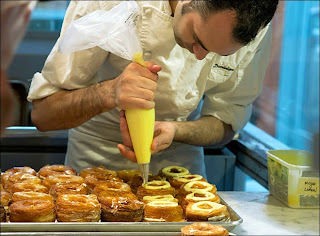 The article discusses apprenticeships, the slim profit margins on a labor-intensive endeavor with expensive material costs, and the marketing of a non-essential, luxury item. Sound familiar? Gopnik mentions the three designations the French use to distinguish between someone who bakes bread, someone who has a pastry shop, and a pastry chef in a restaurant. In letterpress printing, especially among those who are working as private press publishers, people usually start from a specific perspective: someone who likes working with types; someone who likes printing & working with old machines; a writer; a bookbinder. For these people, the other activities involved in publishing a book are always secondary to the one that attracted them in the first place.

One of the two bakers featured in the article is a traditionalist who thinks the focus on innovation has eclipsed a foundational appreciation for the basics of the craft. How many of the printers who want to ride a retro fad for letterpress are simply aping modern offset and digital aesthetics in deep relief? 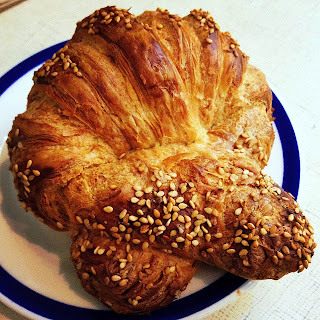 The article's other baker discusses the question of supply: just because you can make more (e.g. once the press is running, why not just run off a bunch more copies?) doesn't mean you should. What he calls constancy - a consistency of quality - must be an overarching criterion. Limiting production is not simply a tactic for creating a sense of scarcity. As he explains, "Would it make money? Yes. Would it be good? No. Would I be proud of it? No. I would kill my own creation."

(The article's printing metaphor even extends to the first baker's disdain for the latter's work. Or perhaps more accurately, his discontent with the attention being paid?) 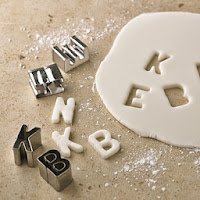 I liked Gopnik's explanation for the role comparatively expensive versions of everyday foods (bread, croissant) have come to play in people's lives. "The huge rise in the cost of raw materials...mean that either you lower quality or you keep it high and present the results as a special, once a week, wait-in-line treat." A similar thread to the one pulled a few blogs back, about the potential for the well-made book to enjoy a renaissance along side the e-book. We just have to get to the same place the pastry chefs have: "...to make the pastry so essential that its market becomes fairly price-insensitive."

Even if this premise is whiffle, Gopnik's article is a good read. Have a look. 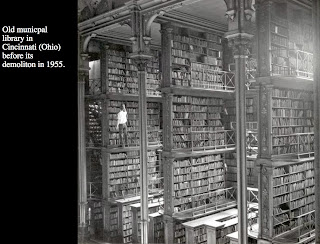 ...from the ongoing unpacking process (not exactly as shown above): a mid-'90s era typographic bookmark from Wessel & Lieberman.

The printer was Martin Wolf, aka Nemo Press, on Vancouver Island. (Don't think the address below is current, so don't bother writing.) I bought my first press, the Kelsey 5 x 8 from Marty. A few years later I heard he was divesting all his printing equipment, which included a huge Hoe Washington handpress. That supposedly was sold to a Japanese printing firm, which wanted it for a display in their foyer or some such. I'll find out if there were more in the promised series. 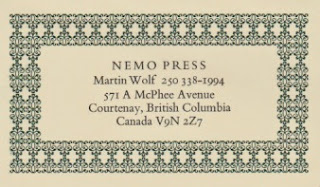 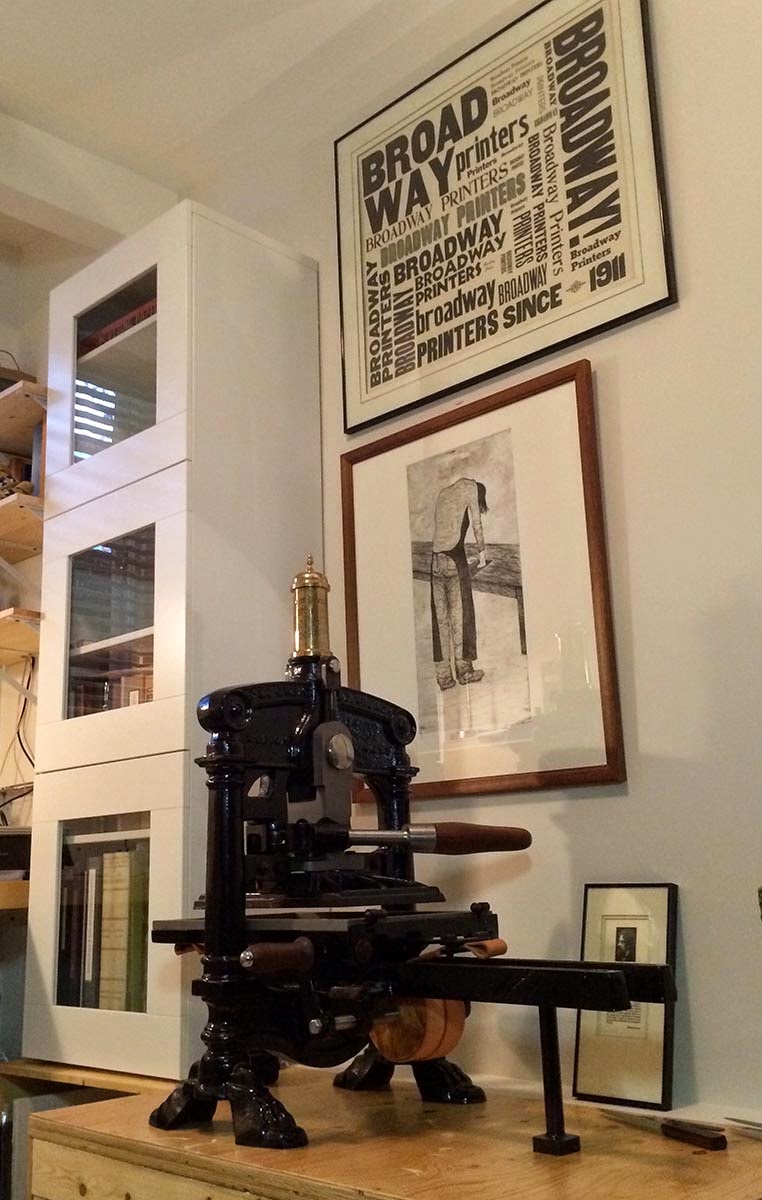 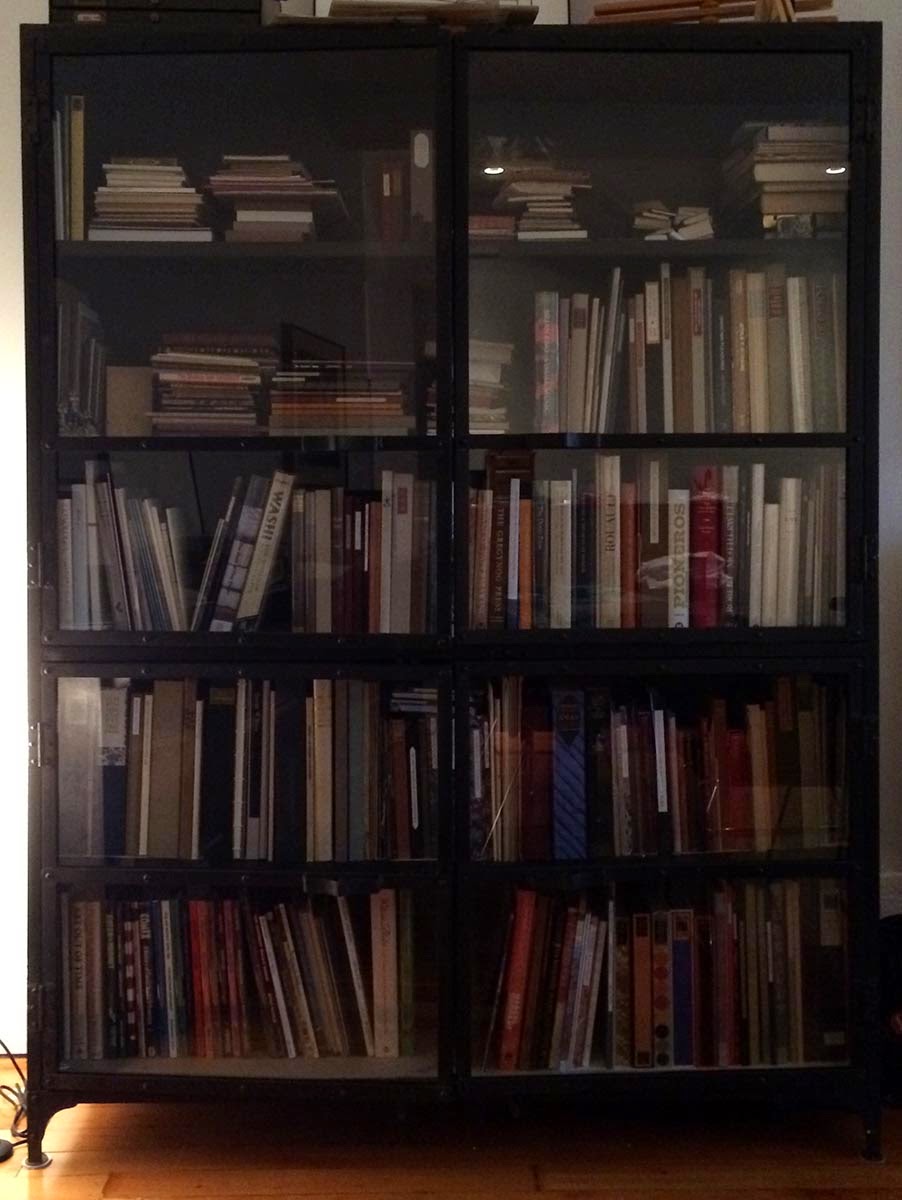 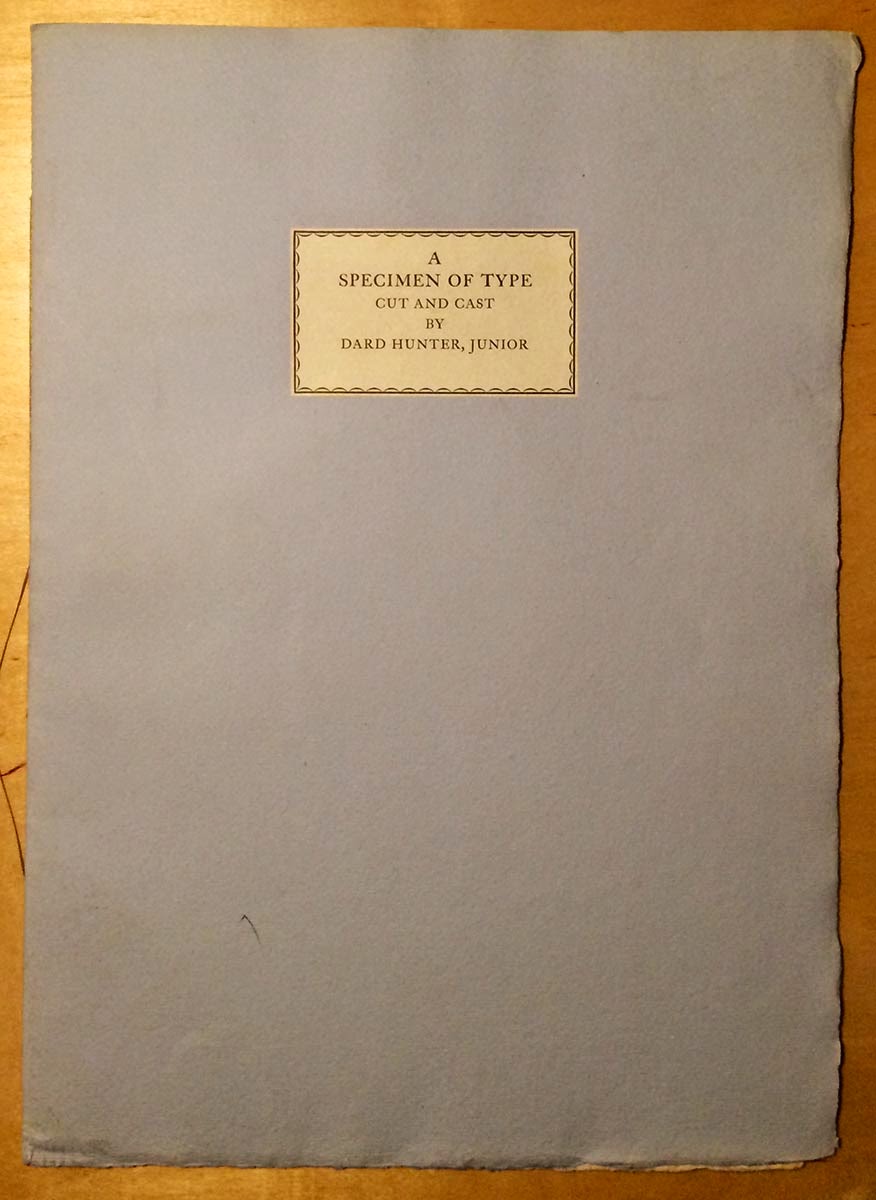 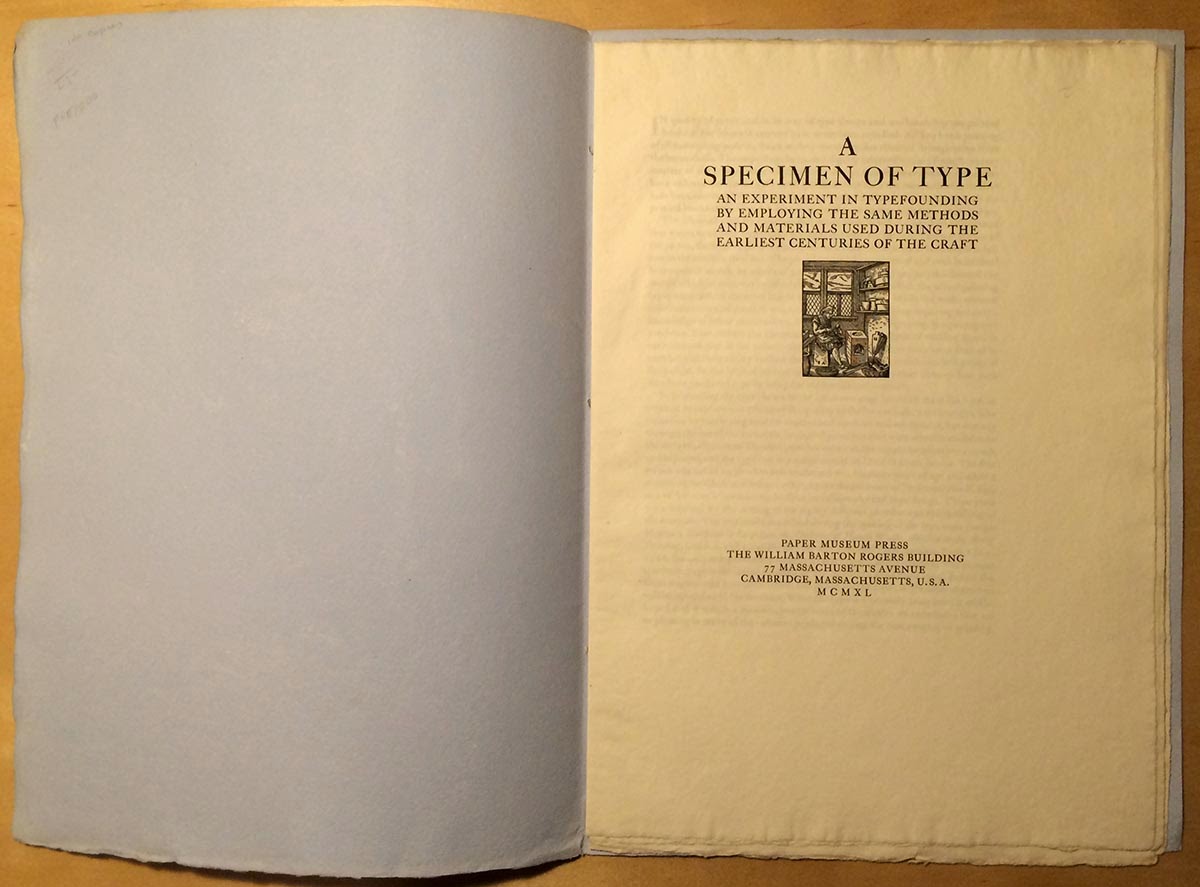 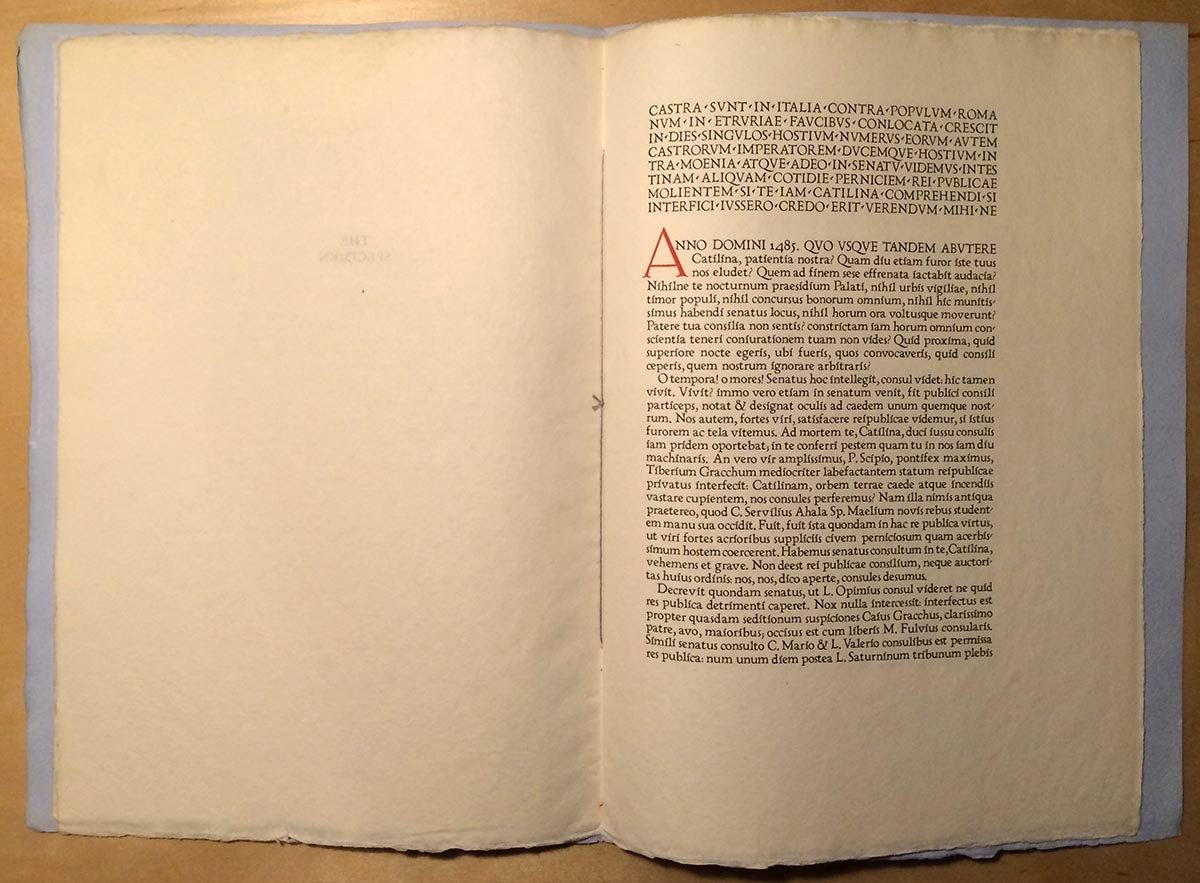 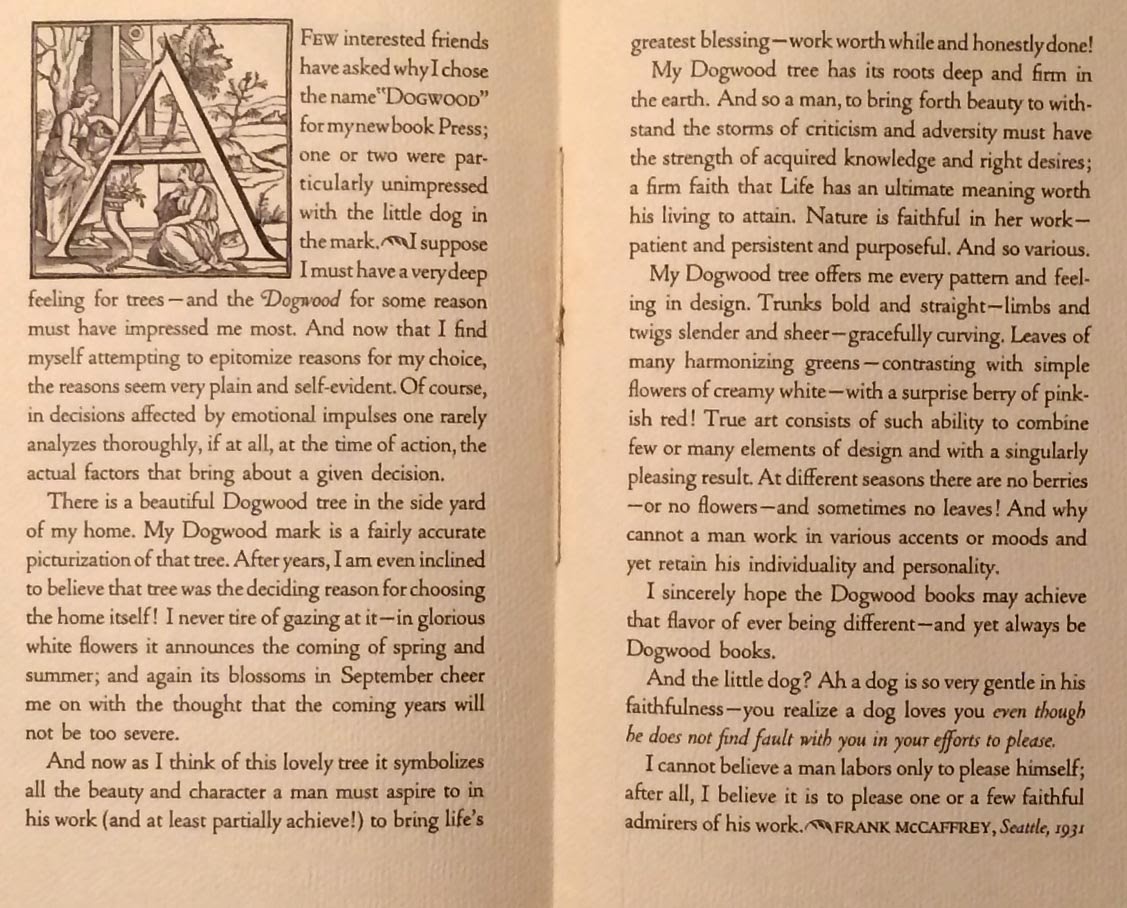 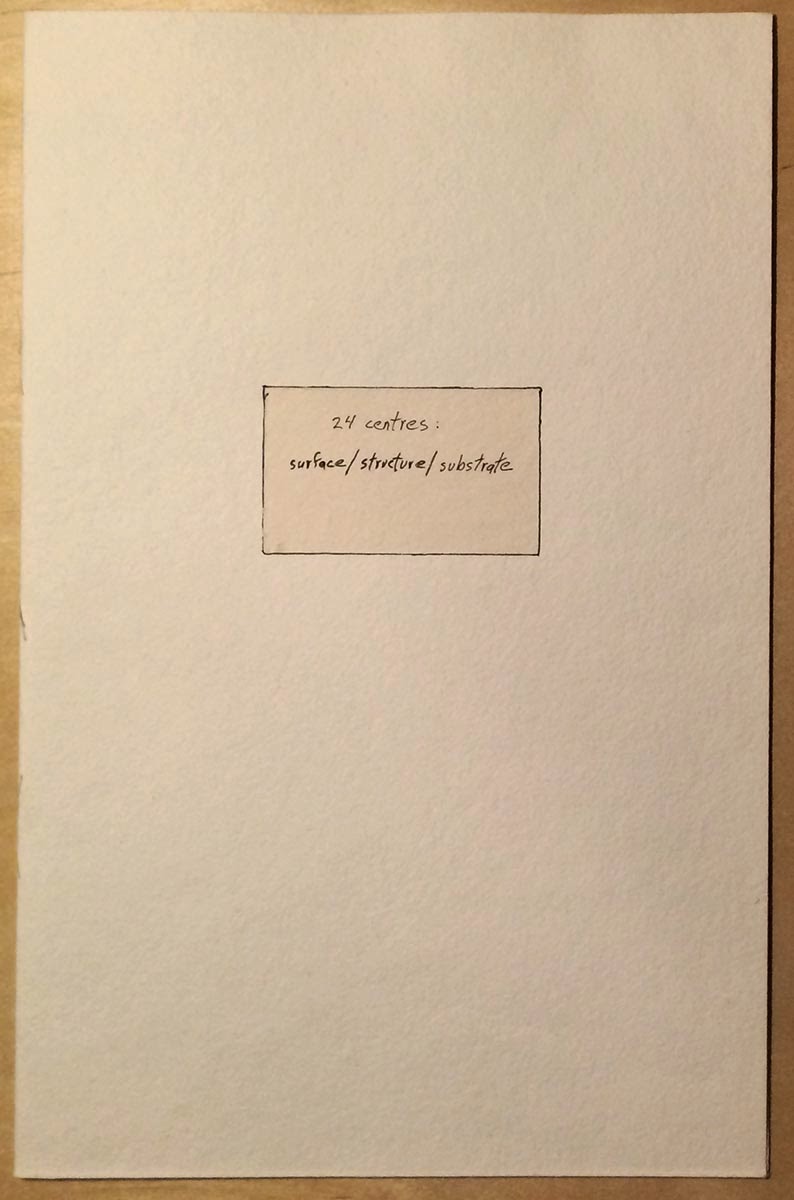 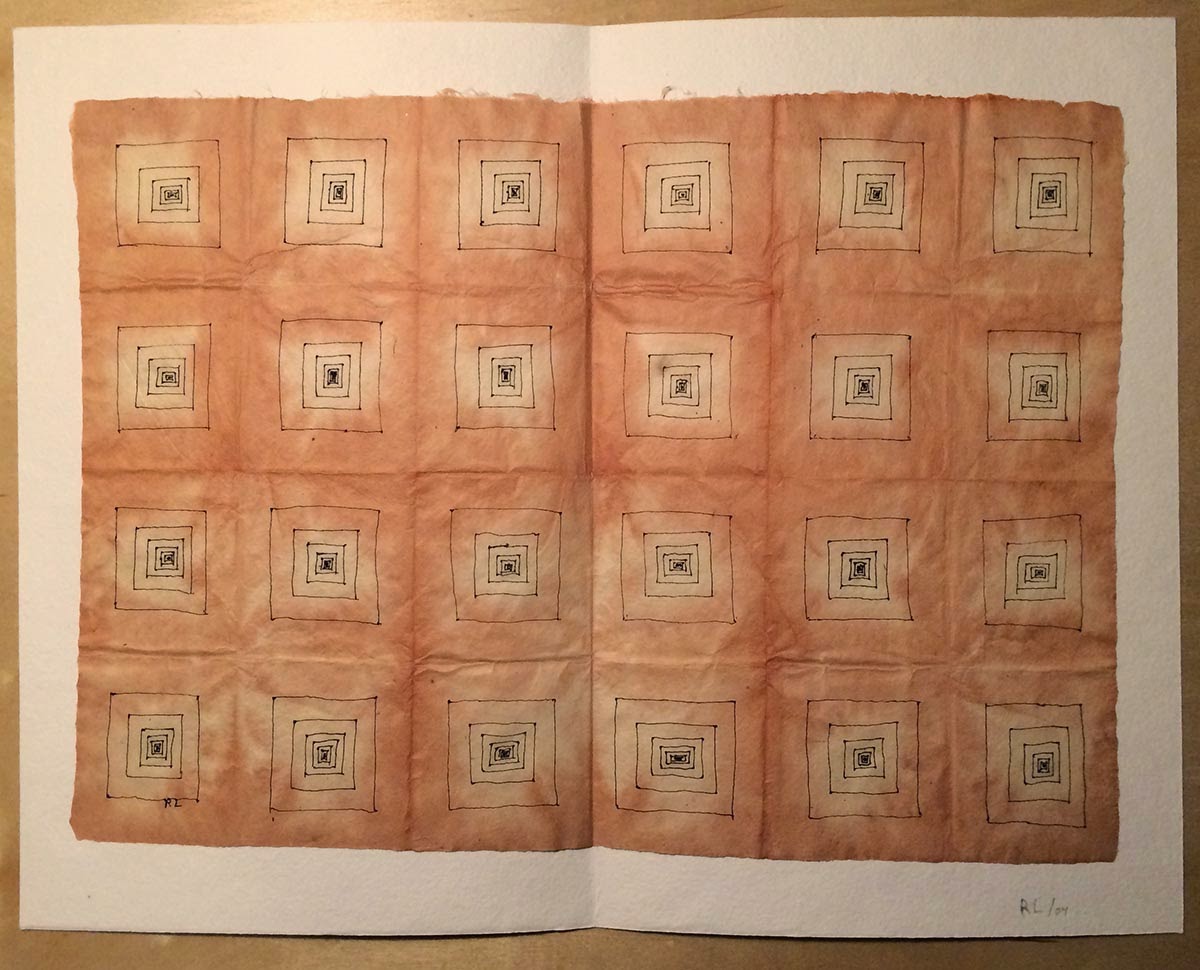 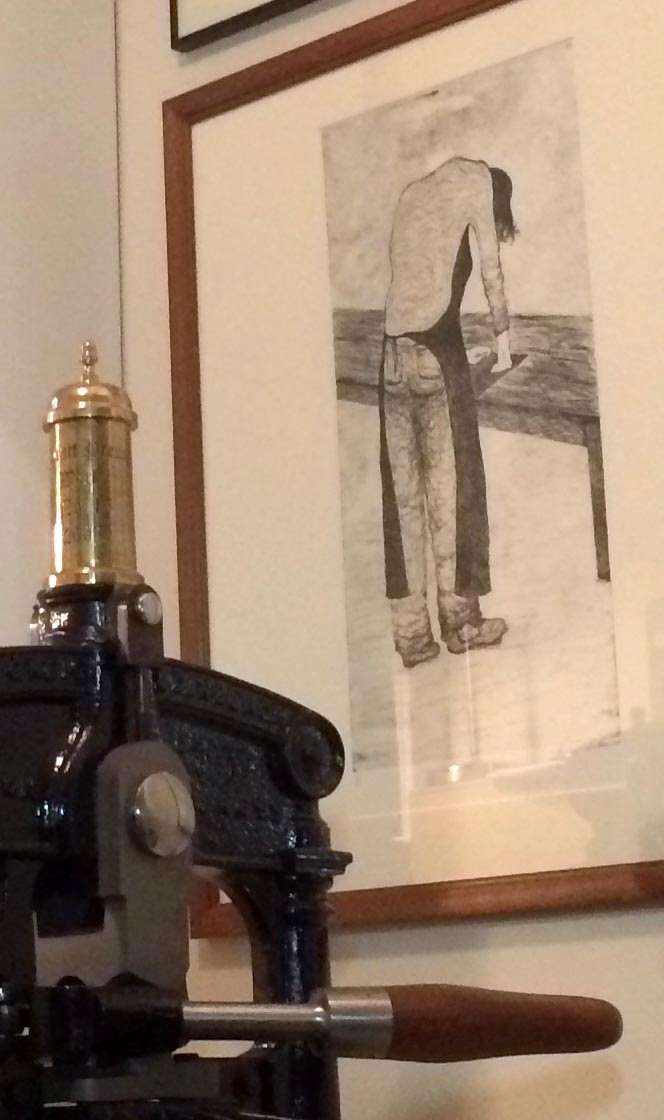 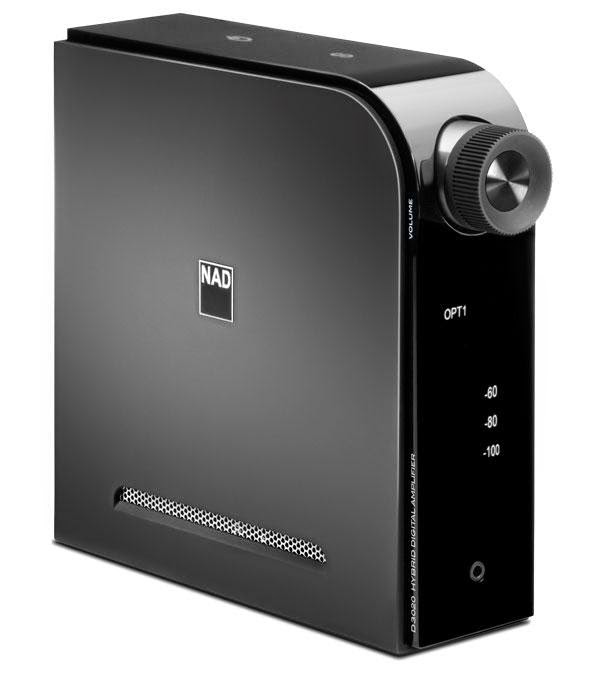