Some Don't Know Some Some or 4AD

One of HM's favorite people (a bookseller, no surprise) wrote this week after reading the brief foreword in our latest, Types/Paper/Print. Dear Soul was politely wondering if "some some" - used in the foreword with reference to a quantity of typefaces included in the sampling - was a printer's term he had not previously encountered, or maybe not?

We cannot be responsible for other people's lack of knowledge. Given his own regional locutions, he should have immediately recognized it for being contextually similar to the plural "all you all." The term that appears in the T/P/P foreword is part of a lexicology familiar to printers as far back as Gutenberg, all of them having included some variant of it in something they printed at one time or another. Our correspondent really was a wonderful friend & supporter for the longest time; too bad we'll no longer be at home for his future calls or notes.

More significantly, major gaps in our own knowledge were serendipitously filled this week, and will make valued  contributions to the printing of upcoming books. The English music label 4AD may be the single most important influence on HM, both graphically (at least in terms of providing inspiration) and curatorially - the concept of  wildly diverse output united only by the tastes & interests of the people presenting it. If you liked what you'd heard from the label, you'd probably like whatever else you found from the label. And its in-house design team, 23 Envelope, our eyes to type in design. 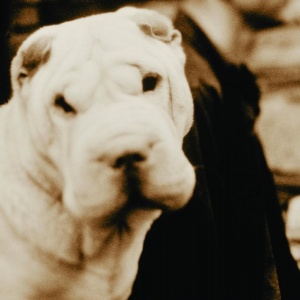 The vinyl was purged long ago (good riddance) but over the years, whenever a 4AD CD was found, it was added to the collection. Imagine the happy surprise to find not one but two new (to us) items this week, both of which have proven sublime listening, the glacial wall-of-sound fog that fills a room and lets your mind wander while your body repeats a series of tasks (i.e. prints with a handpress). Swallow was an iffy candidate, as the credits listed singing (not something we generally want to hear), but that singing was built into the musical wall, mortar in the bricks. The Hope Blister was blissfully vocal free, and bonus - it was a new incarnation for Ivo (Mr 4AD) Watts and the team behind This Mortal Coil (iconic, but less frequently heard at HM due to the predominance of vocals in the tracks). Both of the new discs are sonic representations of HM's aspirations, & highly recommended. 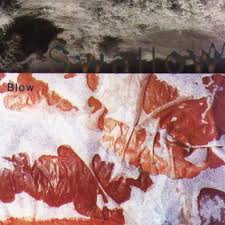 Met with Shinsuke Minegishi this week, got into detailed planning for his retrospective book. Prints & engraved blocks all over his apartment floor for a few hours. Ideas bubbling. Publication about a year from now...

Jason Dewinetz over at Greenboathouse Press (see link at right) sent copies of a label he'd recently set and printed, to adorn a box he'd constructed to contain (& hide) a collection of H'ephemera assembled over the past few years. His own unique drop box. The HM pair looks lovely; a bit of grafting & those serifs could be married up in an interesting way...

Without Jason's labels, we'd have no news to report. Still finishing the cases for Types/Paper/Print. About which: the deluxe issue is fully subscribed. Some copies will go to booksellers, so if you had your heart set on one, let us know & we can direct you to someone. Those copies are expected to come out of Claudia's studio mid-May. The current plan is for a binding very similar to Elements in Correlation: quarter leather, leather tips, paste paper over boards (probably different papers for each copy, culled from Claudia's stash of leftovers).

One point about the deluxe copies that we've repeatedly forgotten to mention: the frontis wood engraving is signed by Shinsuke Minegishi.

Awesome: The Whys & Hows of HM 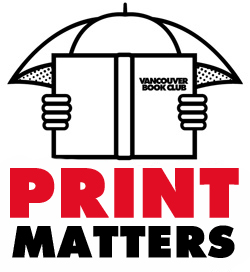 The online magazine Vancouver Is Awesome (an aspirational name) recently posted an interview with HM publisher Rollin Milroy. It's a very, very long interview, complete with his trademark run-on sentences. It also gives about as accurate a picture of the studio's Why and How as is ever likely to appear, for which the author, Liisa Hannus, must be thanked. Milroy's usual no-interview policy was waived due to Hannus's genuine enthusiasm for all things print, and the legwork she'd put into research before getting in touch. 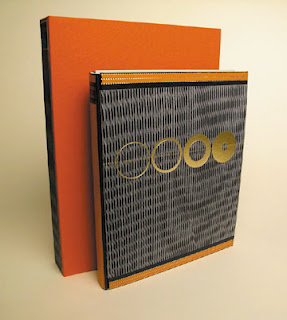 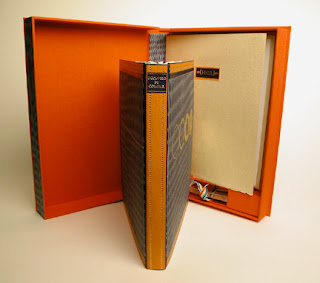 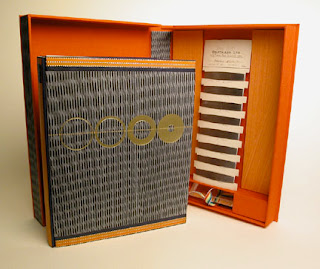 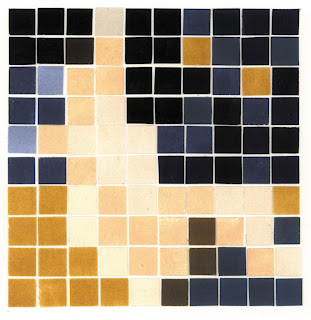 It's In The Mail 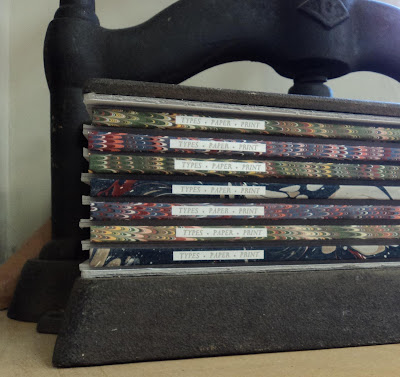 The first batch of Types/Paper/Print were sent out to their future lives today. So were a bunch of the 2012 New Books prospectus. About halfway through casing the regular copies of the book. The photo above shows the three different marbled patterns being used.

But the exciting news is that, within the week, Marsen Jules' label is issuing the long-planned collection of original music inspired by the works of Harold Budd. Very cool. Perfect for quiet moments printing, or reading, books. 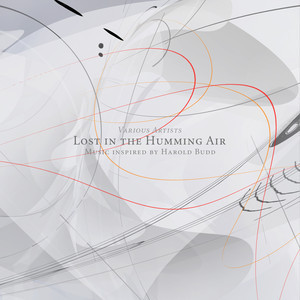