Some Truths About Publishing 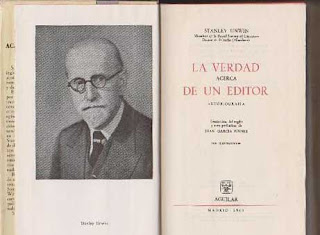 I’m reading a fantastic book. It’s been on a shelf here for a few years, but I hadn’t looked at it until a recent series of duds from the library left me casting about for something engaging. The Truth About Publishing, by Sir Stanley Unwin, was first published in 1926. The book is written from the publisher’s perspective, which is the one with the most expansive view of everything it means to publish books, from the intangible, to the practical, to the unsustainable. It was reprinted many times; I’m reading a revised edition from 1960. Despite the changes in technologies and commerce over the past century, it remains the most comprehensive primer for people interested in any aspect of publishing I’ve encountered. I’d particularly recommend it to authors, for its insights to production (costs), contracts and all the other non-creative parts of publishing a book. Much of it could also be easily extrapolated for any kind of business that involves agreements and partnerships with artists for the distribution or presentation of their creations, e.g. music, games, performance. Here are a few of the pearls to be found:

“It is probably true that anyone who could make money at book publishing could make more in other business…it is possible that the better work you do [at publishing], the less monetary reward you will receive.” Yeah.

“It is one thing to produce a book, quite another to sell it, though some authors one meets regard the two as synonymous.” Some publishers too, but they tend to disappear after a book or two. 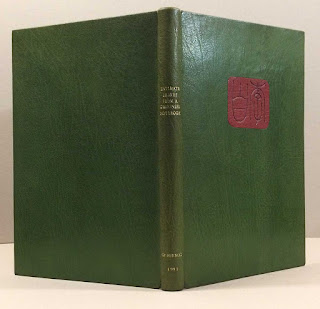 I managed to get down to the annual Seattle Antiquarian Book Fair this weekend. For once it wasn’t held on the Thanksgiving weekend, which is never a time one wants to have to cross the border. The absence of two long-time regulars - Michael R. Thompson and Louis Collins - was felt by everyone, but not morosely so. Saw lots of cool books. Eastons Books, of Mt Vernon, had a number of books from the estate of a Washington-state binder named Derek Lowe. Many were books about binding that he had rebound in quarter or full leather; some were books he’d purchased in sheets and bound. I got John Ryder’s Intimate Leaves from a Designer’s Notebook (Gregynog, 1993) in a lovely leather binding with inlay to the front board. I’ve only dipped into the book so far (one problem with books bound like this is you can’t just leave them lying on the floor by the bed…); Ryder may be a little pedantic and humorless for my taste, but we’ll see. 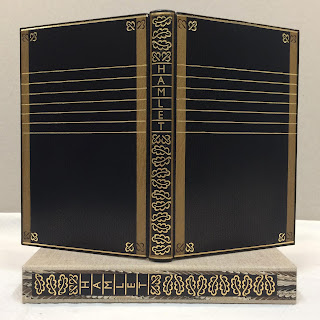 Speaking of nice bindings, here’s a surprise that came my way recently: a copy of Gill’s Hamlet, printed by him for the Limited Editions Club (1933), rebound by Claudia Cohen. For years she’d been sitting on three copies (mine + 2 more) in busted bindings, and I’d long ago given up pestering her to bind one up for me, so when she said she had a surprise for me this was the last thing on my radar. Subsequent to acquiring my busted copy, I came to learn about, and grapple with, Gill’s complete failure as a human. I didn't have to grapple much: he was, and should be remembered (if at all) primarily as an evil narcissist. I confess to finding Perpetua a masterpiece that cannot be denied, and that his book Typography contains many opinions that resonate and inspire. His art, compared to what else was going on during his lifetime, never particularly interested me. But I admire this Hamlet for its production, and Claudia's binding is much more elegant than the original. Told you I’d find something to set me off for this month’s post! 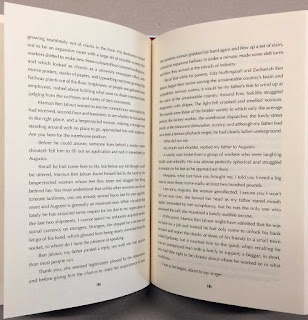 One of the aforementioned library duds I tried reading this past month defeated me on purely typographic grounds: its 400+ pages were set in Optima, very generously leaded. I could not get past the second page. I like Optima very much, but the combination of the face, the leading, and the content (magic realism, to use the easiest label) proved unbearable. It wasn’t ugly, just not conducive to extended reading.

AND ANOTHER THING!
Work on the Kelmscott & Doves leaf book proceeds on schedule. Not much more to be said about it right now.