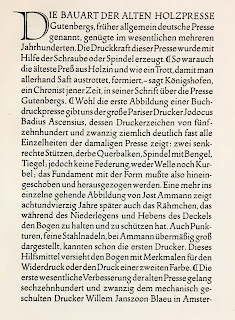 No news from the studio, the lull between projects, so here's a short addition to the Handpress Library – the Ernst Ludwig Presse. 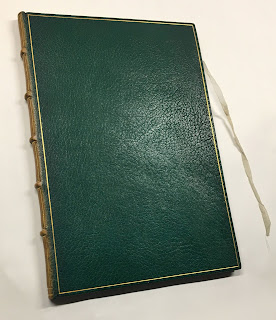 I was introduced to the press in late 2019 when a friend showed me a book in a stunning binding. Bannfluch Gegen Spinoza – the ban on Spinoza, the text of the 1656 excommunication of Spinoza from the Talmud Torah congregation of Amsterdam. The type, design and printing are as purely typographic, and simple, as Cobden-Sanderson could ever have wanted, which isn’t a coincidence. 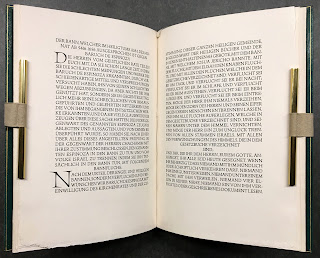 Ernst Ludwig Presse was started in 1907 by the brothers Friedrich and Christian Kleukens, and named for its patron, Grand Duke Ernst Ludwig von Hessen. Bromer Booksellers has called it the “first truly private German press of the 20th century” (Cat. 139), modelling its work and publishing after the Doves Press. A comprehensive biography of Christian at germandesigners.net tells us “Christian was responsible for typesetting and printing, Friedrich for the typography and book design and decoration. When Friedrich left in 1914, Christian took over sole responsibility for the Press.” 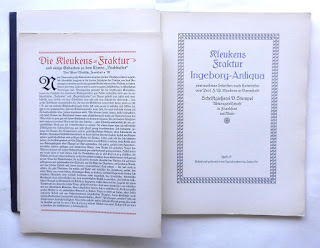 A listing for the press’s edition of Faust (two volumes, 1922-3) from Sophie Schneideman, seller of interesting and fine books, states “there were four types which were created by Friedrich Kleukens for the press, namely Kleukens-Antiqua, Kleukens-Fraktur, Ingeborg-Antiqua and Helga-Antiqua” although these were not proprietary faces per se: each was issued by Stempel. Sophie’s listing referenced Julius Rodenberg’s Deutsche Pressen (1925), which I may have to track down, even though my German is non-existent.
(I took German for a year in high school. The teacher had been a British Army intelligence officer during WW II. One kid in class was particularly adept at getting him to start telling war stories [in English], hence my lack of functional German.) 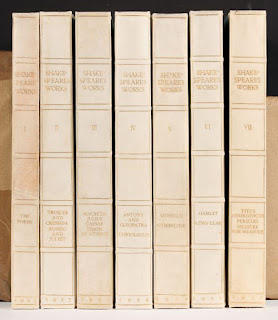 I haven’t been able to find a bibliography of the press, and don’t know how many titles it published. It seems to have ended in 1940 (makes sense). The only non-German title I’ve found is a seven-volume set of Shakespeare plays (& the sonnets), published between 1925 and 1931 in editions (mostly) of 250 copies. 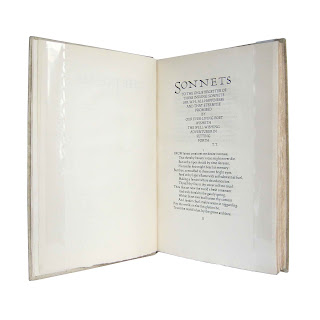 The plan had been to publish a total of 16 volumes, but as private presses have discovered before & after Ernst Ludwig, interest in yet another “finely printed” complete works of Wm S. rapidly declines after the first few titles are issued. When I was first digging into the press’s history, a complete set of the seven volumes in sheets was on offer for about $100 per title, but I hesitated and it’s now long gone. There are a couple of sets listed starting at $3,000. 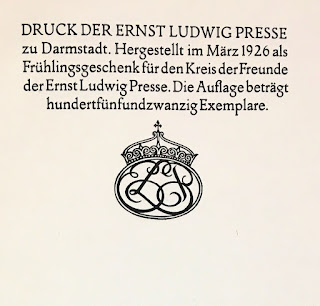 Ernst Ludwig Presse books are not uncommon today, and they often are very reasonably priced for the quality of the work and materials. One title that might be somewhat scarce is the original (1926) issue of a short history on the handpress, written by Christian and issued in an edition of 125 copies. The essay itself doesn’t tell you anything you wouldn't already know if you're interested in handpresses, but it’s a lovely piece of setting and printing. It also appeared in a 1926 issue of Das Inselschiff, possibly before the book publication. A second edition was printed the following year, for the Gutenberg Society, adding 8 plates (one listing describes them as woodcuts) of different presses. This edition may also have been limited to 125 copies, it’s unclear from the listings I’ve seen. It sounds like it may have been printed from the same setting, and issued in the same simple paper-over-boards binding. If it is the same setting, printed on their handpress, it’s certainly the more desirable state to own. I’ve ordered a copy & will report back.
It’s interesting that Kleukens, like his peer Hans Mardersteig, and like Morris and Cobden-Sanderson, considered the handpress to be central to the aesthetic of fine printing. I guess I do as well, at least from the perspective of the printer. Kleuken’s short monograph ends with this sentence (apologies for the rough translation):
“With the handpress, the individual remains decisive; the printer determines the failure of each individual print. His prints have soul, they are alive.” 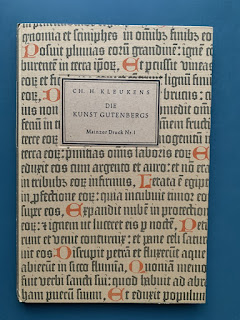 P.S.
One of the last things that turned up while digging into the Kleukens’ work was The Vessel of the Spirit: Thoughts on Book Typography, a translation from Christian’s Die Kunst Gutenbergs (1943 and ’51), printed by none other than our friend Will Rueter, proving once again that when I think I’m finding new things, Will’s footsteps are already all over the floor.
AND ANOTHER THING!
Here’s the plan for 2021: between now and summer I’m going to be working on getting a couple of projects ready for the press. In the summer I’ll be printing the new collaboration from Barbara Hodgson and Claudia Cohen, tentatively titled Paper Botanists. It will be the debut publication from Barbara’s imprint, Byzantium (planned for 2022). After that I probably will print a checklist of HM’s publications 2000 ­­­– 2020. I have to decide if anyone, including me, cares enough to make the effort. I want to find a few more texts from the 17th and 18th centuries related to the history of printing that haven’t been published in English. Like the appendices in Fragments & Glimpses. We’ll see what turns up.