Your Eyes Do Not Deceive 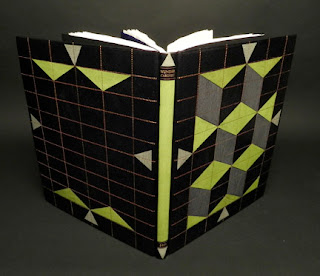 The deluxe copies of The WunderCabinet (numbers 1 - 10) were shipped out from Claudia's studio last week. She and Barbara spent two full days assembling all the bits contained in the box's two levels (the bottom one consisting of two drawers), and writing up a detailed inventory of items for each copy (sewn into a wrap made from Karli Frigge's marbled paper, shown in image at the bottom of this post). Each of the deluxe boxes contains about 40 items. No two collections are the same, but some of the items that might be found include a limpet shell from the Aurora Islands; a cast of a finger of Catherine Vorontsov, Mme la Princess de Dashkov; a porcupine quill; reducing & enlarging lenses; a sea urchin skeleton; polished stone obelisks; ammonite pairs; a parchment armillary sphere; and artifacts and Roman coins from Syria. Each box also contains, in a separate pamphlet, a sunprint and a watercolor painting of a magnolia seed head. Barbara sent these photos of the book and box along. 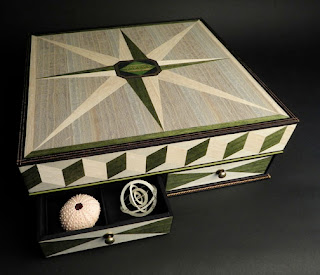 Claudia had described her plans for the deluxe binding as full leather with a trompe l'oeil pattern, but that could be anything. As one young fan of her work commented upon seeing the deluxe WunderCabinet, just when you think she couldn't possibly outdo herself, she does. 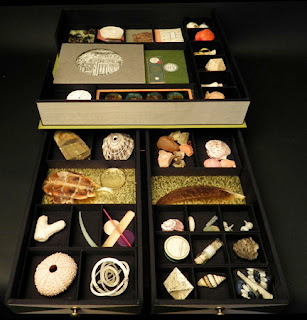 While working on the boxes, the two collaborators also discussed various upcoming projects, the first of which will be the third volume in their color series, tentatively titled A Colourful Calling: The Palette at Work. In a format similar to The Temperamental Rose and After Image, A Colourful Calling will explore how color is used in a variety of occupations, from chemistry to house painting to hairdressing. Illustrating the examples with palettes for interior design, artists’ supplies, textile dyeing, philately and psychology, to name a few, Barbara and Claudia show that work has never been more colourful. We expect to be publishing A Colourful Calling at about this time next year. Meanwhile, for those in the area, don't forget that Barbara will be talking at the upcoming Wonder Cabinet event in New York City on April 16. 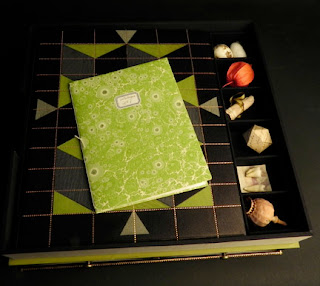