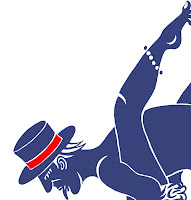 David Clifford's been getting naughty over at Black Stone Press. After many years of thinking and planning, he's finally published a new edition of the "pièces condamnées" from Charles Baudelaire's Les Fleurs du Mal, featuring multi-color illustrations by Charlie Mayrs. Very, shall we say, sophisticated illustrations, appropriately stylized and explicit for poems that deal with decadence and eroticism. So sophisticated that we are showing just details from a few here, lest we need to add some "18+ content" warnings to this blog's header. 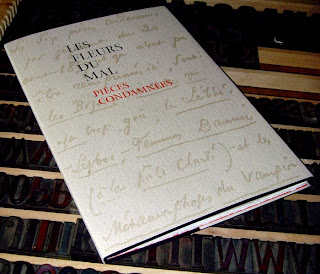 These six poems, which were considered to cross France's obscenity laws, were censored from the collections first (1857) and second 1861 editions of Les Fleurs du Mal. (Not until the 1940s could they legally be printed in that country; a history of the poems' publication can be found here.) David's interest in the poems was sparked in the 1960s, while living and working in France, where he would listen to an LP recording of the complete poems. The challenge - beyond finding time for a personal project amidst Black Stone's ongoing commercial work - was connecting with an artist who had the right style and sensibility for the project. 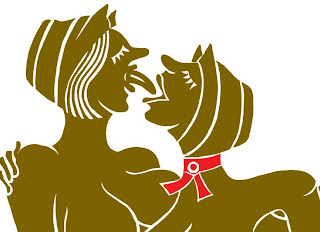 Charlie Mayrs was a student at the Vancouver Art School in the 1960s (one of Robert R. Reid's many students) with a passion for painting. But his subsequent career took him into advertising, and it was not till this past decade, after retiring, that he returned his full attention to art. He has created and published a number of artist's books, printed on commission at Black Stone Press, featuring his art as well as his own prose and poetry. Having gotten to know Charlie and his work during these projects, David invited him to create the sexytime illustrations - one for each poem - for Les Fleurs du Mal.

The edition is printed in an edition of 40 press-numbered copies (28 pp, 6.5 x 9.5 inches), signed by Charlie Mayrs. The text (in French only) was set in Arepo and printed (in a total of eight colors) on Rives BFK paper. It is sewn and bound into a printed, heavy case of handmade paper by David's daughter and partner at Black Stone, Yasmine Franchi. The price is $300, available directly from David (see link along right side of this page; no kids or prudes).