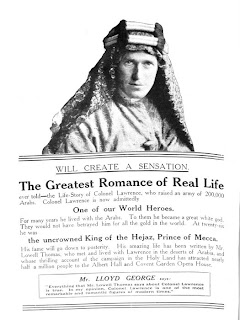 A great new comprehensive site dedicated to T.E. Lawrence and journalist Lowell Thomas can be found at Clio ("dedicated to developing innovative American history projects that are designed to engage students, inform educators and researchers, and appeal to a wide public audience"). The collection of images and photos is very cool. 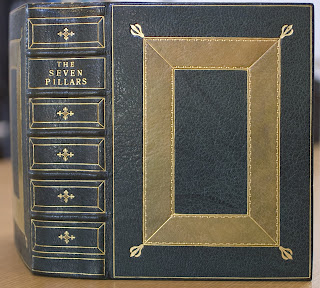 Anyone interested in fine printing & publishing should take at least a passing interest in TEL, since he was responsible for what may be the most elaborate bit of self-publishing in the English language during the 20th century. His original edition of Seven Pillars of Wisdom was a gargantuan undertaking, beyond just the writing (or reading...) of it. Some info about, & images of the book can be found at the E.J. Pratt Library site. A brief but insightful account of its production can also be found in the memoirs of Herbert Hodgson (Fleece Press, 1989), who printed it. He was initially presented with a treadle platen press to do the work, which he had to trick out with a motor to get through the project. Simon Lawrence's Fleece Press also published a brief account by Vyvyan Ryder of the plans he and TEL had discussed to start their own private press, modelled after Kelmscott (how dull that would have been). Although none of these fascinating bibliofacts were included in David Lean's "Lawrence of Arabia," the movie's still worth seeing, preferably in a theater, or at least on the biggest screen in your neighborhood. For anyone wanting to really dig into TEL's writings (such as his original, 1922 version of Seven Pillars, which was even longer than the version he eventually published!), check out the Castle Hill Press.