Westergard's Up To Something Fishy 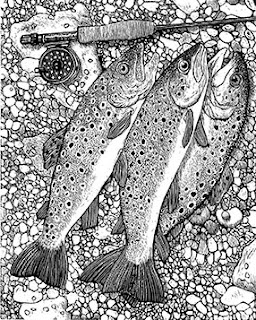 Jim Westergard's site recently posted six new engravings he's editioned, the blocks having been commissioned for an upcoming book from Deep Woods Press. The one above, "John's Browns," is our particular favorite. The six engravings will be included in The Intruder, a chapter from Robert Traver's (a.k.a. John Voelker's) 1960 book Trout Madness. Publication is slated for later this year.

Each of the six engravings measures approximately 4 x 6 inches, and has been printed by Jim in an edition of 20 copies. His original prints remain among the best art deals available, especially for work from an artist of his caliber.