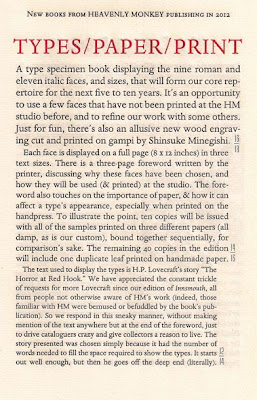 A new four-page prospectus for books to be published by HM in 2012 is being mailed out over the next week. Sadly, close reading reveals at least one major untruth: the lead article claims copies of the new Types/Paper/Print specimen book will include "one duplicate leaf printed on handmade paper." The presumption was that there would be sufficient extras from the copies printed on handmade paper (for the 10 deluxe copies of the book, which include the text in full on three different papers: Guarro laid, handmade, and Arches Wove). But there weren't, and so the plan was abandoned. Meanwhile, David Clifford was busy at Black Stone Press printing the prospectus, which was already out of date. C'est la vie. There were some extras, so some copies may sneak out with the extra leaf: the rare "duplicate leaf" variant.

The prospectus also fails to report that the three copies of the HM Drop Box, featured on the last page, are in fact all sold. They were, however, sold to booksellers, so they're not entirely out of play.

A PDF version of the prospectus is available from the home page of the HM site.