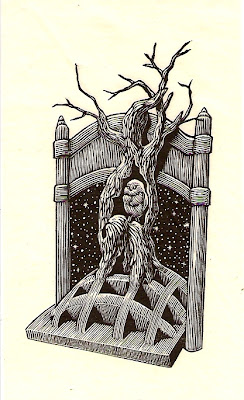 That's the title that Shinsuke Minegishi gave to the new wood engraving he made as a frontis for Types/Paper/Print. We'd suggested something that riffed on the form of a handpress, and he was particularly taken with the honeycomb pattern on the Ostrander Seymour's platen. Voila. Very cool. And a teasing precis to the retrospective of his printmaking that HM will be publishing.

The block (image approx. 2 x 4 inches) was printed by Shin on gampi. It will be mounted on a printed sheet, bracketed between the title and his name, facing the book's title page. Shin will sign below the print in each of the  ten deluxe copies.

Printing of the text pages was completed last weekend, and copies have been collated. We may have enough extras printed on the Arches and handmade to sneak a few into some of the regular edition (i.e. replacing the Guarro sheets).

Claudia Cohen will be binding the deluxe copies in April, so those copies should be shipping in early May. The regular copies will start coming out of the HM studio by the end of March. Meanwhile, a four-page prospectus of upcoming projects (including T/P/P) was being printed this week by David Clifford at Black Stone Press. Copies will be included with orders for the new book, and there will also be a general mailing.