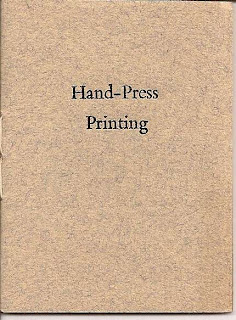 The most recent acquisition for HM's library of books about handpress printing: The Hand-Press, a miniature issued by the Magpie Press for the Second International Antiquarian Book Fair (Los Angeles, 1967). 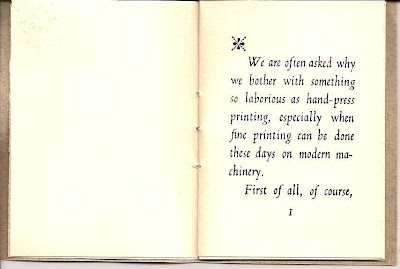 The short text covers the usual ground about craftsmanship in the age of mechanization. Unfortunately, it also perpetuates the misconception that using a handpress is an excuse for poor printing, rather than a method for achieving excellence. The two french-fold sheets were printed four-up, dry, with too little impression and no evidence of any makeready. Nonetheless, here it is. 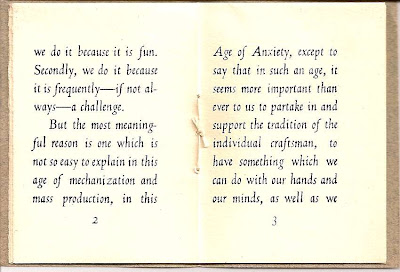 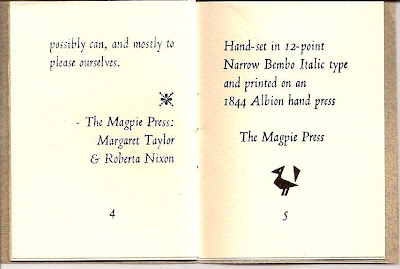 If miniature it must be, better to look for Ward Ritchie's The Hand Press, well printed in the Fleece Press's usual manner, and including wood engravings by Anthony Christmas. The brief text covers Ritchie's introduction to printing during a short apprenticeship in France.

There's also The Unfinished Psalter, Monseigneur Francis Weber's brief account of William Everson's aborted attempt to print the Roman psalter. This little book was printed by Roger Pennels in 1986. Weber was the Archivist of the Archdiocese of Los Angeles. It reminds us that some months ago we promised a post about Everson's Psalter. The drafting of that was begun, but it is not a book that is quickly or casually written about, and so work proceeds slowly. But it will appear...