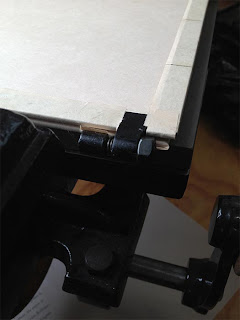 Finally printed something with the little Albion foolscap press. It's only been five years since its arrival. The cause of the delay was twofold: why use the little press when the much bigger Washington was right there; and "using" the Albion would entail a boring initiation period of making adjustments and getting used to how it wanted to work. But with the Washington still out of commission due to a fractured frisket, and some printing needed doing, attention turned to the Albion. The printing was the promised broadside version of Harold Budd's poem "Autumn Song 1990," taken from Angel (the poem that broke the frisket!) 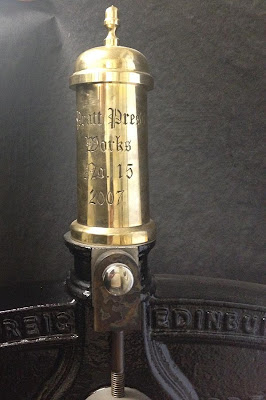 The press was made by Steve Pratt. As recorded on the finial, it is the 15th Albion to emerge from his press works, completed in the late summer of 2007. It's a beautiful piece of casting & machining, and deserved to have been put to work immediately. Alan Dye, at Nimble Impressions, received Pratt Albion Number 18 in 2011, and was much quicker off the mark to put it to work. He also took better pictures of its arrival & use; see here.

The type for "Autumn Song 1990" was moved over to the bed of the Albion. Making it fit required some resetting, mostly reducing the leading. Then building a skeleton: the Albion's bed is noticeably larger than the 15 x 20 inch platen, so figuring out how to position the platen bearers took some thinking (since, once positioned, that's where they'll stay). 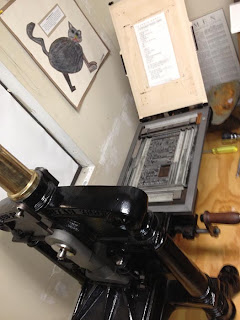 The press arrived with the platen well balanced, and the only real adjustment required was to the plate that bolts to the back of the bed, and from which the tympan hinges. When lowered, the tympan was not parallel to the bed; the hinge end was too high. But the plate that incorporates the hinges can be adjusted up and down (thanks for that tip, Steve Heaver of the Hill Press).

Last, with the type locked up and the tympan packing in place, the arc of the bar had to be adjusted. The Albion doesn't have the same feel as the Washington when pulling an impression. It probably is just a matter of getting used to the feel of it. The Washington has a little point of compression, a subtle lock, when you know it's just right. The Albion doesn't have that (at least, not yet); the bar just goes till it won't go no more, whether it's the stop or the type that calls halt. So, allowing for an average amount of packing on either side of the tympan, adjusting the stop to get enough impression, but not so much that the type will be damaged, took a bit of fussing.

The biggest surprise when printing with the Albion (vs the Washington) really shouldn't have been a surprise at all. It was how much pull was required to achieve a good impression. With the Washington, pulling the bar requires no more effort than closing a heavy door; the platen's 300+ pounds do all the work. The platen on the Albion, however, probably doesn't weigh much more than 50 pounds, so getting a good impression required both more muscle and a longer dwell. 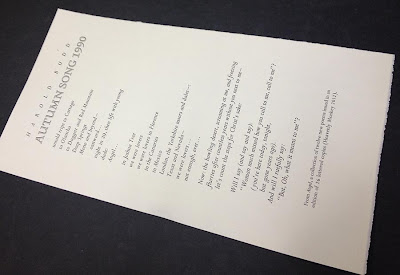 About 40 copies of the broadside were printed, most on Reg Lissel's HM Text, some on Guarro laid. For a first effort on a new press, it's acceptable. It takes time to get to know a press's quirks (hopefully not the 10 years it took with the Washington). Next up is a prospectus for Cutting Paper, which will be printed two up, and is therefore more characteristic of the kind of formes we print.

Copies of the broadside and prospectus will be going out to our regulars and friends before the end of the month.

p.s. Rummonds' book was, of course, consulted while tuning up the Albion. Ran across this great offhand comment:

"If speed is important to you, try a Vandercook proof press or a photocopy machine."