The Pressing Matters of Will Rueter 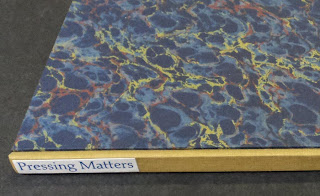 Will Rueter is just about to issue a substantial new project from The Aliquando Press. Pressing Matters presents two essays by Leonard Bahr on the private press, augmented by a chapter on the subject by Paul Hayden Duensing, and one on the economics of private press publishing by us/HM/ Rollin Milroy. 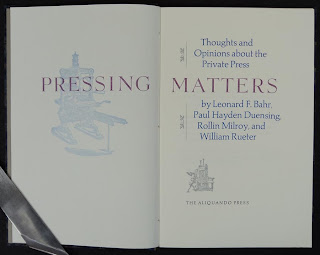 Bahr was a commercial typographer whose greatest creativity was reserved for his own private imprint, the Adagio Press. In the 1960s and '70s he issued many items, from ephemera to substantial pamphlets, with type and typography the over-riding focal points. His most ambitious project, by several orders of magnitude, was An Account of the Work of T.J. Cobden-Sanderson & Cobden-Sanderson's Partnership with Emery Walker (1969), with texts by Norman Strause and John Dreyfus, and two original Doves Press leaves tipped into each copy. 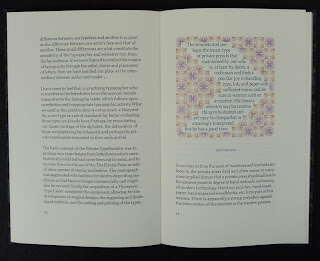 Will received galley proofs from Bahr of his essays when they were first set in the early 1970s. Bahr had initially intended them to be the first parts of a book that would look at different aspects of private press publishing. Chapters 1 and 2 from Pressing Matters - "The Idea of the Private Press" and "The Private Press Defined" - were issued by Bahr, in a revised form, in the first two issues of his periodical Typographia (no more numbers were published). The book for which they were initially conceived was also to include chapters on the purpose of the private press; how imagination, innovation and patience should be employed to bring out the unique advantages of the private press; and economics - how a private press can be made to survive, if not prosper, within our not-too-bookish society. 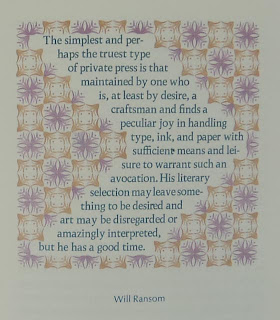 For whatever reasons, the type remained standing after Bahr pulled the proofs later sent to Will, but the project was abandoned. "After proofing his essays Leonard seems to have been unwilling to speculate further on the private press, feeling that the topic was in constant change," Will writes in the books afterword, where he also offers his own thoughts on Bahr's questions about purpose and the importance of imagination. 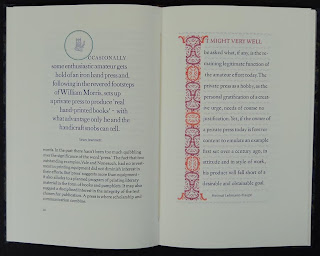 The most striking feature of the new Aliquando book is the 17 "mini-broadsides" throughout the book, each presenting a quote related to the topic of the private press drawn from sources as diverse as  Rudolf Koch, Peter Beilenson, and William Everson. Bahr included similar, but less extravagantly adorned quotations in the Typographia issues. Will's broadsides employ his extensive collection of types and ornaments, combined with his talent for using color (and numerous press runs!). 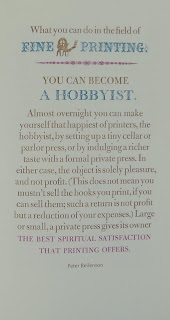 Perhaps even more than private press printing, Paul Hayden Duensing's interest lay in private type design and casting. He was an important mentor to people like Bahr and Will, plus Jim Rimmer (who created a type named after PHD) and many others who were interested in learning how to cast type. His chapter in Pressing Matters, titled "Private Printing, Private Typefounding," is a collection of his writings on the topic, both published and in correspondence with Will. "His words seem to me an essential adjunct to Leonard's thoughts," Will explains in his afterword. (PHD and Will collaborated in 1976 on what may be the only American-Canadian private press co-publication, Buchstabenfreude, the Delight of Letters.)

Pressing Matters is published in an edition of 50 copies (7 x 11 inches, approx. 50 pp.). The paper is Hahnemuhle, the primary text faces Optima and Palatino. The first ten are extra-bound (details to TBD), and include a manuscript broadside in Will's beautiful calligraphy bound in. Copies 11 to 50 are cased by Will in marbled paper over boards with a cloth spine. Contact Will though his site for more details.