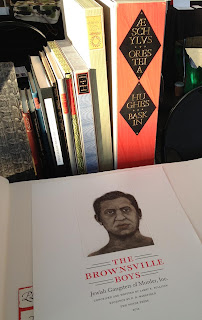 Our plans to post updates during the recent Codex fair came to nought. No time during the fair - it was a madhouse - and too busy having fun in the evenings. Can't offer much in the way of quantifiable info on the fair, but we at HM had fun. Very busy on the opening day - Cutting Paper's debut - and word about the book seemed to spread, as we had a steady stream of people over the four days saying they'd been told to come see the cut paper book.

HM was table no. 1, so we were a first stop for many visitors. One problem with shows like Codex is there is so much to see in such a concentrated setting that it becomes overwhelming, and after a few hours one needs a pause to absorb what's been seen before continuing. 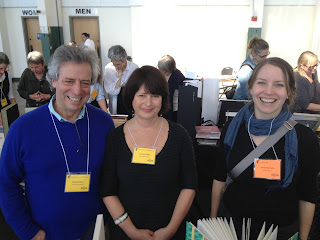 We were fortunate to have the team of Ken Shure & Liv Rockefeller watching our backs, with two tables displaying the small & prestigious stable of artists they represent. First among firsts is Leonard Baskin, whose work continues to cast a long shadow over contemporary book arts even a dozen years after his death. Ken & Liv have been showing at Codex since the first fair (2007), and during that time they have added a few new artists whose work has been influenced by Gehenna's interests, aesthetic and quality. One of the most recent additions is HM friend Sarah Horowitz (above right, with Ken & Liv), whose latest book (Effigies) sold out at this year's fair. 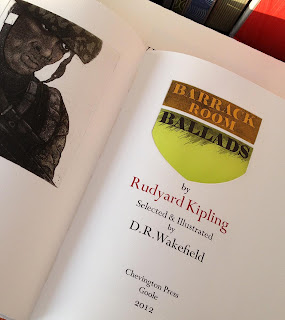 Also on display at Ken & Liv's table were the stunning books of Bob Wakefield's Chevington Press. He may have the strongest claim of anyone to be carrying on Baskin's tradition while also exploring his own interests and style. A young Wakefield met Baskin during the artist's sojourn to England in the late 1970s, and worked on a number of the books Baskin produced while there. This was his  training for launching the Chevington Press, with Bob doing all the letterpress (a fellow handpress printer, his an Albion) and intaglio (rich multi-color etchings printed on a 19th century press) printing himself. On display this year was his latest publication, Kipling's Barrack Room Ballads accompanied by portrait etchings inspired from current political events in Afghanistan and Africa. In its weight and depth, the content is in keeping with his previous books exploring issues of extinction and slavery. 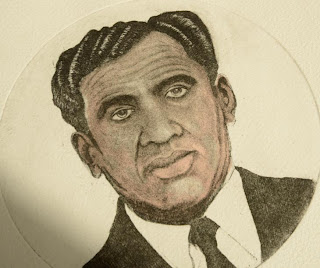 Turning his considerable talent for printmaking and portraiture to a slightly more playful topic, Wakefield was recruited to illustrate the next project from Ken & Liv's imprint, Two Ponds Press. Longtime readers of this blog may remember that one of the pieces of news we brought back from the 2011 Codex fair was the birth of TPP. Since then they have issued their first book (Anthony Hecht's Interior Skies), and are on the cusp on their second (The Little River by Margaret Wise Brown, illustrated for the first time by another of Baskin's proteges, Michael Kuch). Wakefield's project is one that originated long ago with his mentor, Baskin: a portfolio of portraits and brief biographies of Jewish gangsters from the early 20th century. The Brownsville Boys: Jewish Gangsters of Murder, Inc. features texts by Larry Sullivan, Chief Librarian at the John Jay Criminal Justice Library, CUNY. A collection of plates rather than a book, each gangster's image and story is presented on a single sheet (the texts variously arranged by Russell Marret and printed by Art Larson), all to be contained in a clamshell box (to be made by Claudia Cohen). Publication is expected for later this year. Similar in spirit to HM's favorite Chevington book, Pugilistica Judaica (first encountered at Ken & Liv's table at the inaugural Codex fair, eights years ago now...).

A few more updates from our adventures at Codex to follow this week...