Following is a mere sample of what was to be found at the Codex book fair. It was impossible to get around to everyone, and so what's included here simply reflects our own interests and connections... 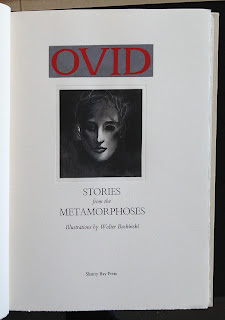 Walter Bachinski and Janis Butler (Shanty Bay Press) have been regulars at Codex since its start in 2007, and this year they brought along their newest publication, a massive edition of Ovid's Metamorphoses (selections from). Walter's previous books have been particularly noteworthy for his large and bold pochoir illustrations. For Ovid he elected to experiment with photogravures, reproducing the richly toned drawings he had been making while planning the book, rather that attempting to use them as a basis for translating into another medium. The book was a monumental undertaking of setting and printing for Jan, and her quarter calf binding with vellumed gampi sides is very well executed. Their edition of Ovid is a serious and truly significant piece of private press publishing in Canada (and beyond). 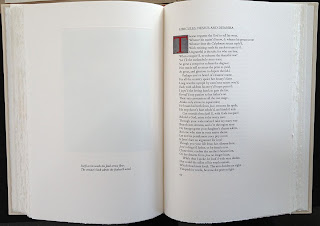 Met Tideline Press's Leonard Seastone. To our chagrin, we failed to immediately connect the name to one of our favorite books, Paste Papers of the Golden Hind Press, which he printed the year we finished high skool. Gorgeous book, as were the more recent publications he had on display, and Leonard was great fun. Looking forward to an ongoing discussion with him about various shared interests. 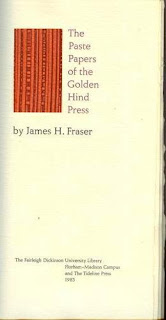 We met Ido Agassi of Even Hoshen, based in Isreal. Ido had the hands-down claim to coolest project at the fair: he had received a commission to print a facsimile of the first page of the first printing of Einstein's Theory of Relativity, so that a copy could be taken up to the International Space Station in April, where it will be signed by one of the astronauts, and then returned to earth. (Some of those details might be wrong - the story was conveyed late at night in the hotel bar - but the gist is all there & true.) Had some interesting discussions with Ido about the challenges of finding Hebrew type to work with (none is being cast anymore), and the finicky nature of setting the vowel accents (which are separate from the letters, and must be placed as a line immediately below their letters, something that can easily become misaligned if there's too much movement when locking up. Cool guy, cool books. 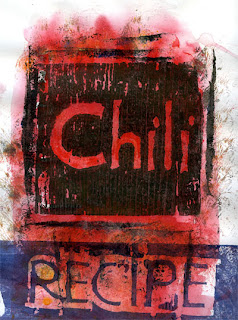 Longtime HM inspiration David Esselmont is another Codex regular, and he had a new book detailing, in multicolored wood cuts, his process and recipe for making chili. We at HM like our chili, and were highly dubious of a pom claiming to make good chili, but his recipe (which can be seen in a short film at his site, accompanied by his own soundtrack) looked sound. And another new HM friend, Craig Jenson, is not only a celebrated binder among private press publishers and collectors, but also a chili cook-off judge, and he vouched for David's chili.

David has been focusing his efforts in recent years more toward fine art (particularly painting) than printing books, and he is currently working on a series of watercolors inspired by Stockhausen's "In Freundschaft" for solo clarinet. We told him about our plans to do an Artists Pamphlet with loscil's phonautograms (a medium David wasn't familiar with) later this year. A shared interest in the connections between music and graphic arts. 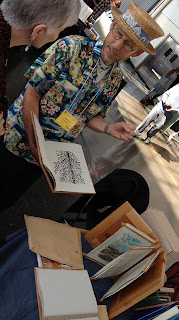 Among the always intriguing things to be found at Peter & Donna Thomas' table was a previously unpublished poem by William Everson, "The Alder." They have worked with Everson texts in the past, and Peter was one of the fortunate students to learn printing at Everson's side, at UC Santa Cruz. The new book is printed on Peter's own paper, and initially conceived to be displayed/read in a hinged wooden structure that shows all four deckles (top left in image below), so each page is printed as a separate leaf. Thirty copies of the book were issued in this deluxe format, accompanied by a second volume with brief texts about the poem and the book. A single-volume edition was also issued (20 copies), for which Peter & Donna devised an effective and pleasing structure (bottom right below) to sew the leaves together and attach wood (alder) boards. The poem recounts Everson's cutting "the stately alder at the trail fork" and "turning the god into cord wood. Everson cut this tree near his home on Kingfisher Flat, near Davenport California. Everson's landlords owned a local lumber mill. In fact, they were the ones who milled the cypress, taken from Robinson Jeffer's Carmel property, used for the slipcase of Everson's Lime Kiln Press edition of Granite and Cypress. Peter and Donna were able to get them to mill an alder tree, cut from the same site Everson had cut the tree in the poem, and they used that wood for the binding of this book. They also were able to use Everson's own Goudy Newstyle type, which he had used to print Granite and Cypress, to print their edition of "The Alder." 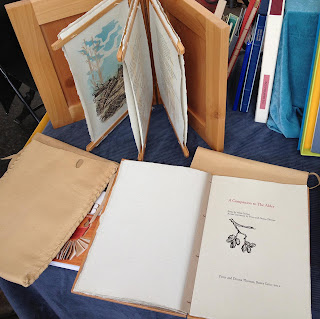 One inexplicable absence among the exhibitors was Arion Press. Given that Codex is in Andrew Hoyem's own town (and that he visited on Sunday, gamely standing against the wall opposite HM's table to have his picture taken with various admirers), it seems surprising that the organizers would not have made whatever accommodations or inducements necessary to ensure the participation of the man who has undeniably been central to continuing San Francisco's tradition as a center for fine printing and book arts into the 21st century.

Greenboathouse Press was able to mark its recent publication of Michael Ondaatje's poem "Tin Roof" with a visit by the author himself on the second day of the fair. HM stopped by Jason Dewinetz's table but missed the author by just a few minutes. When we circled back to our own table, however, we found a distinguishedly-rumpled gent in deep discussion with Barbara and Claudia about their various books, and it slowly dawned on the admittedly-dim HM publisher that it was Ondaatje himself. He seemed particularly taken with The WunderCabinet. Speaking of which, here's a lovely photo of Claudia basking (baking) in the sun beside a copy: 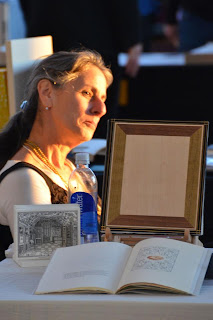 Apparently Codex organizer Peter Koch intimated to the audience at the symposium that 2015 may be the event's last year. Maybe it will have run its course, or maybe someone else will pick up the reins. The foundation has never issued follow-up reports about attendance, sales etc, so it's hard to gauge its effectiveness against the cost & time involved. Nor have they ever done follow-up surveys with exhibitors, which would seem an obvious endeavor to gather data and aid future planning. But organizationally the people behind 2013 (many of them volunteers) did an excellent job, with no hitches. The fact that the Craneway Pavillion is a greenhouse, and Codex always enjoys a warm, sunny week, was beyond their control.

That's it for our Codex reports. Overall, more fun than we'd had at any previous Codex, and successful from the perspective of giving people the opportunity to see Claudia & Barbara's books all in one place. That was really the only reason we bothered. (Sorry to all who were P.O.'d we didn't actually have any copies left to sell.) Whether it's worth the cost (and tables are very expensive), time and effort will depend on who you ask. For us, we'll simply attend the next one; much more fun not to be tied to a table. Leaves more time to scour the Berkeley book shops, about which we'll post next week...

p.s. we have only a few copies of the HM Codex Miscellany left, now priced at $225.