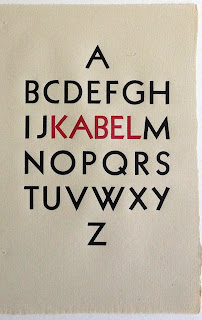 The deluxe copies of the new book will include an additional section showing four uncommon, foundry titling-sized faces on loan to HM from friends: Anker Romanisch, Coralus, Gallia and Kabel. Above is the 72-pt Kabel. Isn't it clever?

More details about the deluxe issue soon. Pretty much settled on an edition of 35 copies total, with the first 15 being deluxe. These will be bound in full vellum by Claudia Cohen. Copies 16 - 35 will be cased at HM in marbled paper over boards, similar in style to Types/Paper/Print. Been pushing to get copies out before the end of the year, but decided to slow down about, enjoy the work, and issue the book in January 2014. More as it happens...