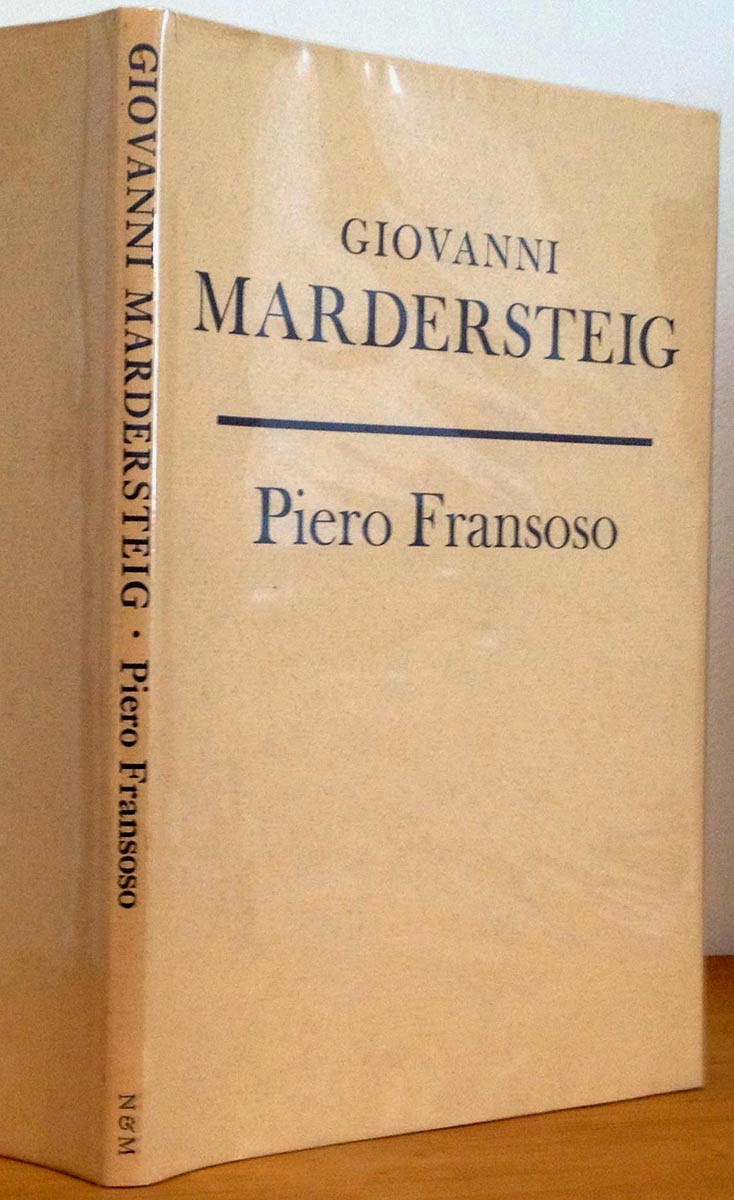 I promised some news about our old friend Francesco Griffo. There will be, just not this week. But, related, here's a recent acquisition: Giovanni Mardersteig's Piero Fransoso. Before you Mardersteig fans run to your shelves wondering how this title could have escaped your attention, it's because this book is better known as The Remarkable Story of a Book Made in Padua in 1477. That's what appears on the title page. I got a copy because Griffo makes an appearance and I've been reading up on him again. 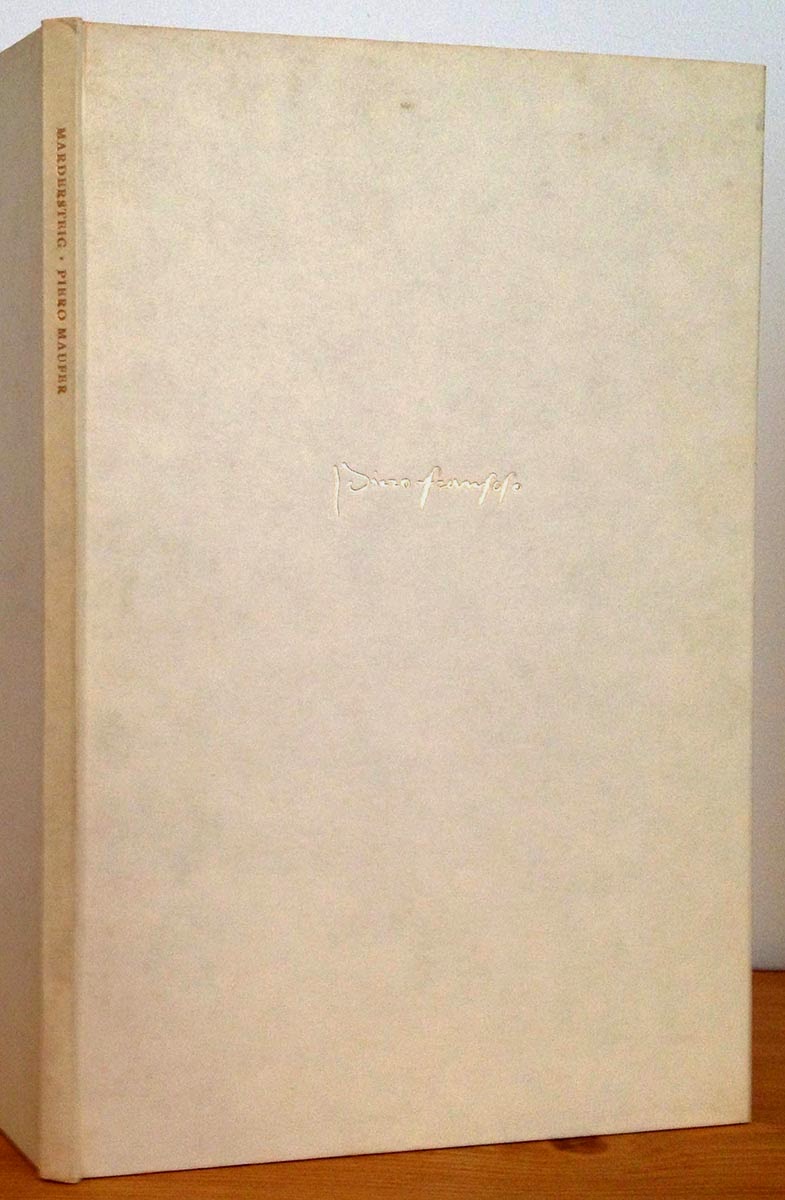 The book isn't uncommon, but only one copy listed online mentioned having a jacket, so I got that one. You can see it above. The book is cased in paper vellum, with PIERO MAUFER on the spine (the name of the printer of the book in question), with a facsimile of the signature Peiro Fransoso stamped on the front board. All the same guy, Mardersteig just couldn't settle on using the Latin, Italian or a combined version of his name. 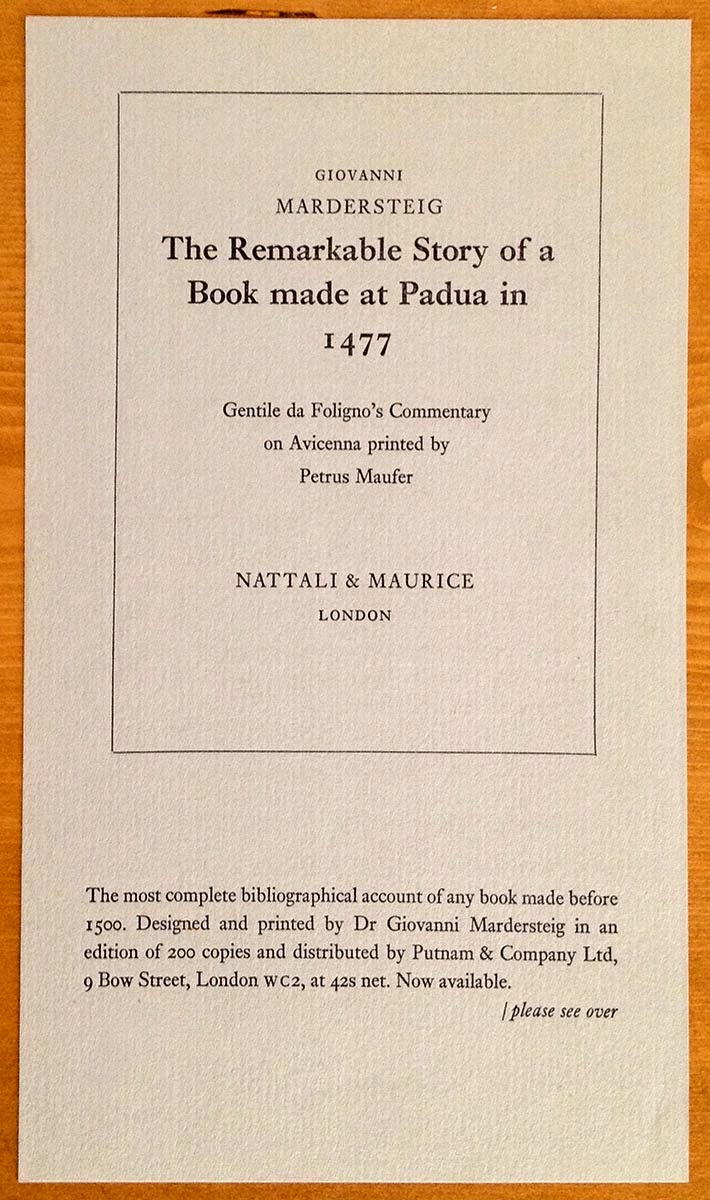 The book was published by Nattali & Maurice and distributed by Putnam. Never encountered the N&M imprint before. This copy contains a prospectus for the book (as do most copies currently on offer), listing on the verso some upcoming typographic titles. 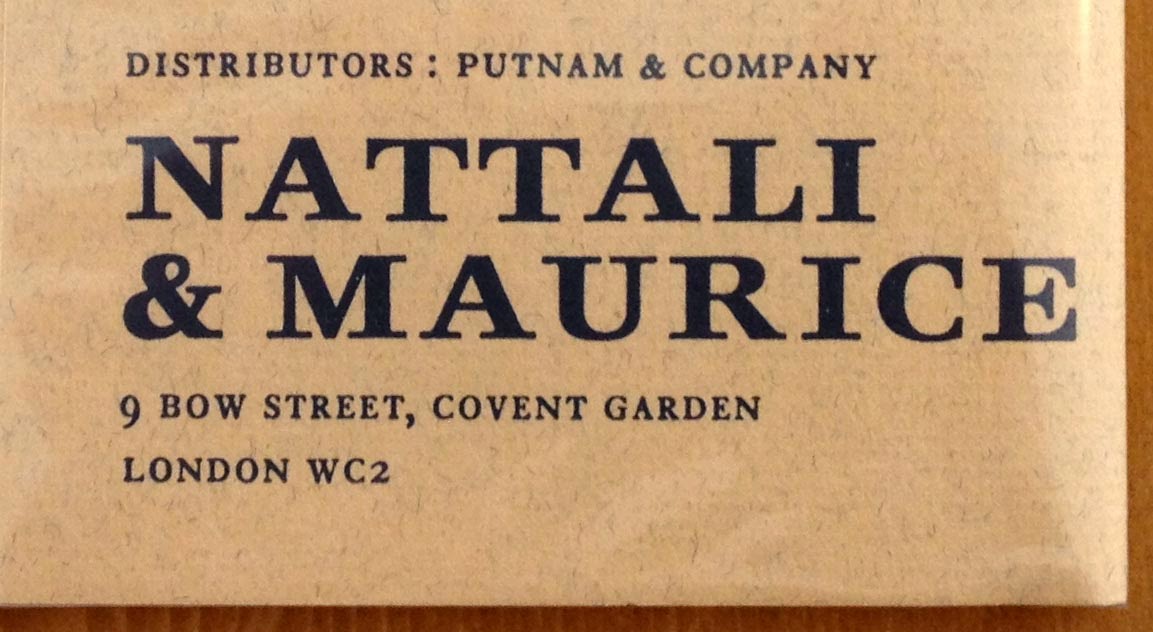 That's the bottom corner of the rear flap above. In addition to the prospectus, tucked into this copy was a pre-publication notice to booksellers. Isn't "exposed for sale" a very odd phrasing? This must have been before the age of Big Marketing, whose boffins would have preferred  "offered" or "presented." 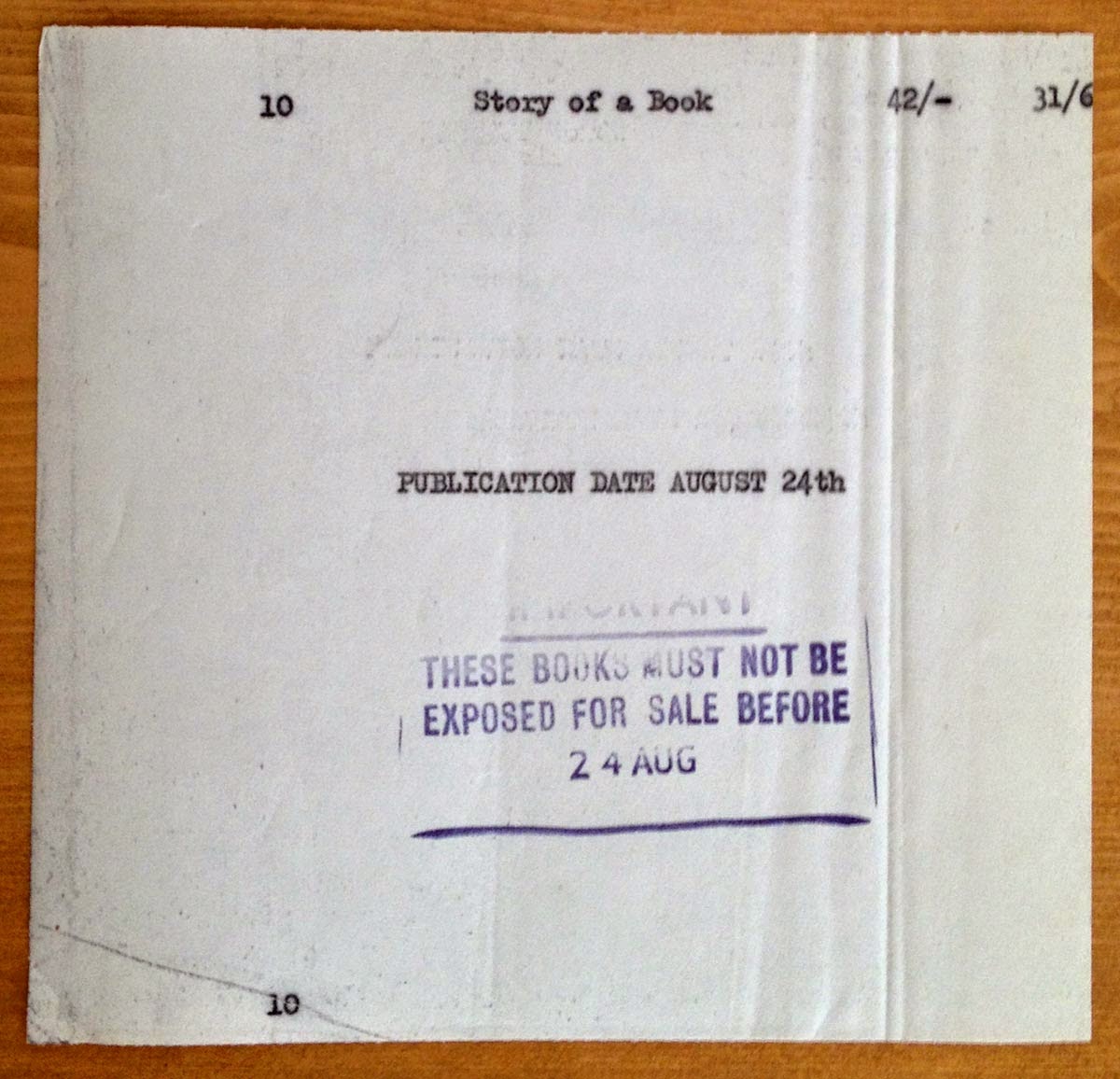 All I've been able to find about N&M is buried in this page at the Tate site: the imprint originated with one Armand Maurice, whose business was taken over by Putnam's 1931 and renamed Nattali & Maurice.  The Bodley Head acquired Putnam's and Nattali & Maurice in 1962. I can find no titles published by N&M after 1969 (Oliver's got a typo in the listing for his copy of P. Fransoso; I've written to tell him).

Seems unnecssary to add that the book is beautiful: 200 copies designed by Mardersteig and printed at Stamperia Valdonega. Probably one of the nicest books issued by N&M. And it's an interesting story for fans of publishing history: "The most complete bibliographic of any book made before 1500." Some interesting commentary on productivity rates of handpresses. 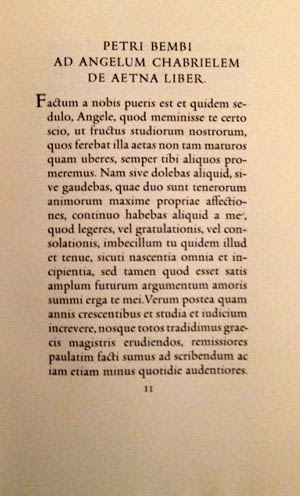 About Griffo: I need to get my hands on another of Mardersteig's books, the Officina Bodoni 1969 edition of Pietro Bembo's De Aetna (or the 1970 German version). Apparently there is an afterword by the printer in that discusses the original edition, Aldus, Griffo etc, and I need to read it. Thought I had a line on a copy but nyet. If anyone out there can forward scans/photos of these pages from the book, it would be much appreciated & perhaps even somehow rewarded. My email is over on the right side of the screen. 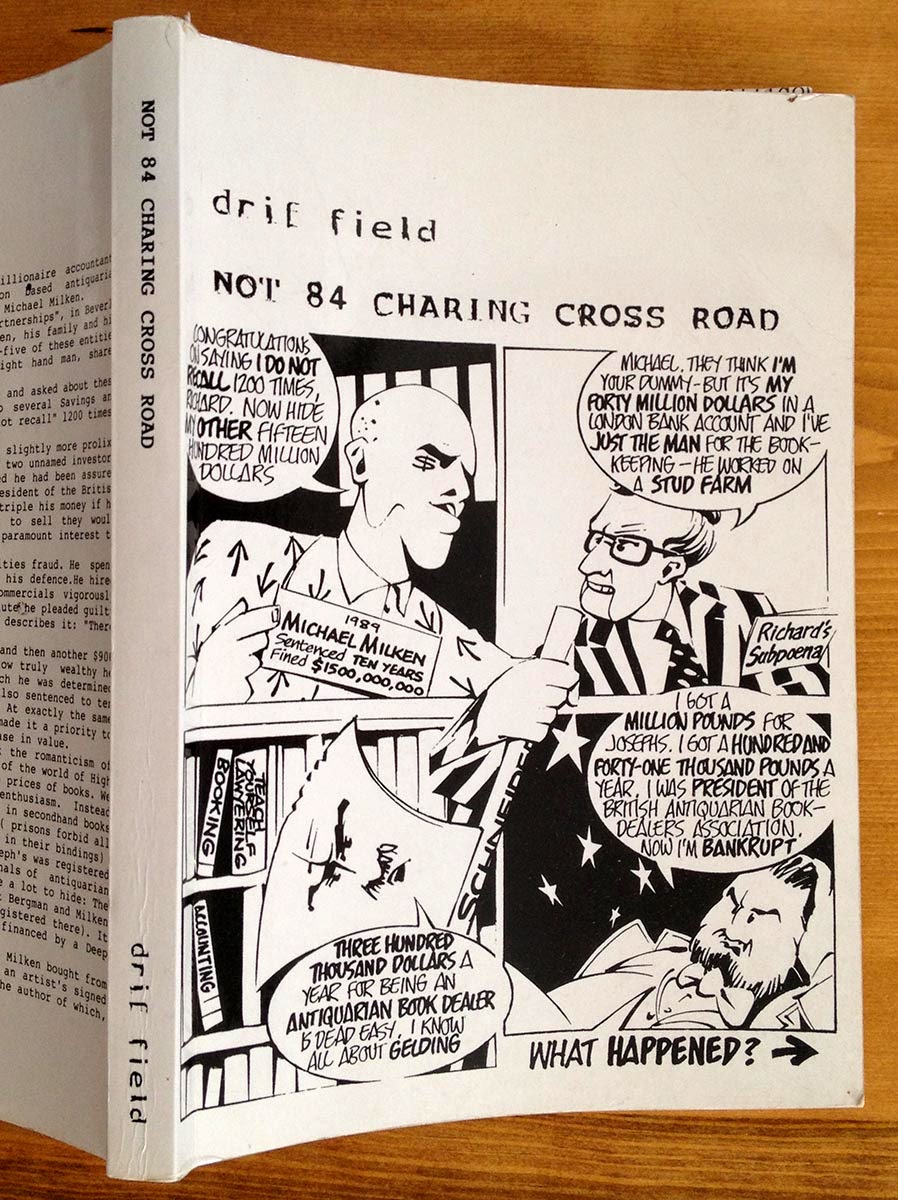 STICKING WITH PUBLISHING for this week's theme, a friend loaned me his copy of Drif Field's Not 84 Charing Cross Road. I was unaware of the antiquarian book thread in the story of Michael Milken's unravelling, and Field's account is entertaining and not at all unbiased. Field is (was? don't know) a legendary U.K. book scout whose other DIY publications are guides to used bookshops. His knowledge of the trade, from a scout's perspective, is deep, and he pulls back lots of curtains. Content aside, the book is an exercise in critical reading, as his spelling, setting and grammatical mistakes often confuse the exact meaning of a sentence. Less writing at or after the pub would have greatly increased clarity. Reading Is further challenged by "setting" the text with some first-generation word processing program, the auto-justifying creating some pages that are variously mesmerizing, distracting or ugly patterns. (I won't even start with the blank spreads between sections: don't ever have a blank recto in a book, unless you specifically mean to.) Check out the stacking on this page!

That pedantry aside, it was an entertaining read. As a piece of reportage it falls short - the exact basis for the trial that occupies the final third of the book isn't stated clearly until almost the end - but as a glimpse into an esoteric subculture it's full of insider information. (FYI, in the U.K. the preferred term is bookdealer, never bookseller.) Highly recommended to anyone considering becoming a bookseller (if that still happens), interested in starting to collect books, and those already afflicted with either condition. Also useful to anyone going into business of any kind.

A fun coda: the copy loaned to me had a photocopy sheet laid in with the text of a letter from bookseller Louis Weinstein, of L.A.'s Heritage Books. The letter was a published in 1994, shortly after Not 84... came out. Weinstein plays a tangential role in the story, and in his letter he questions the veracity of Field's account of events. But what's interesting is that this letter was published in the trade journal The Bookdealer, which also makes a cameo in Field's book, an appearance that puts any letters it might publish into a certain context:

"There is no trade magazine for Bookdealers [sic]. There is a magazine called the Bookdealer which is issued weekly which any sensible person would expect would keep the trade informed but its main interest in life is complaints about the postal rates to Zamboanga..."(p. 100).  He then goes on to makes comparisons between the journal and a fictional Mrs Whitehouse, which I'll let enjoy when you get your hands on a copy of the book.