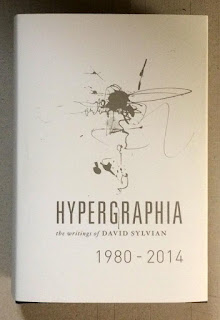 It's not supposed to be released until next week, but my copy of David Sylvian's massive, beautiful, incredible new book Hypergraphia arrived via Royal Mail today. I've had a chance only to flip through it; what follows is superficial, except for the enthusiasm.

Sylvian's longtime designer, Chris Bigg, did a brilliant job with what must have been a mind-boggling amount of source material. Sylvian's art has always extended to the visual, both his own work and in collaborations with painters, photographers and graphic designers. The image below might sum up the degree of detail invested in the publication of Hypergraphia: the outside of the jacket is Sylvian's characteristic hazy cool, and the inside is also printed, with a contrasting collage of darks. 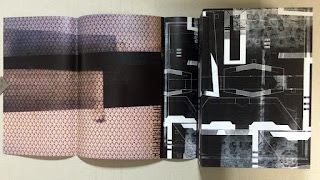 Look who appears neat the front of the book - Atsushi Fukui's original painting of "The Botanist," which previously appeared as a simple line drawing in HM's publication of Sylvian's prose poem Uncommon Deities (of which I still have one copy of, FYI...). 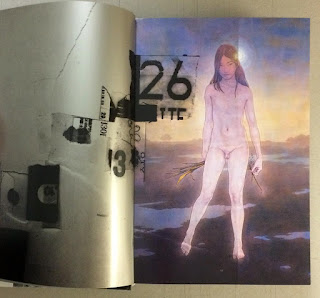 The book is published in an edition of 3,000 copies, and seems to already be nearing depletion. (Five hundred copies from the edition were signed by Sylvian and Bigg, & if you have one of those, call me.) It's priced just over C$100, which is nothing considering what producing the thing must have cost. (My only quibble is that the thing is so thick - over 600 pages of heavy coated paper - the text block is already straining from its case. Rounding could have helped tremendously, but who knows if that's even something commercial binderies can do these days.) Hypergraphia could genuinely be called an artist's book, a term I generally despise but which seems apropos here, in content & form. If you have any interest in Sylvian, 23 Envelope/Chris Bigg, or just kool things, hunt a copy down. 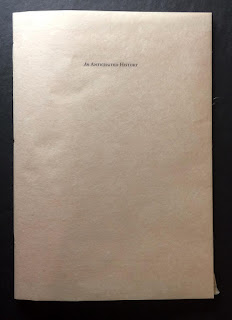 Though it is dull & meager by comparison, I finally got around to printing the "jackets" for the 12 deluxe large-paper copies of An Anticipated History. 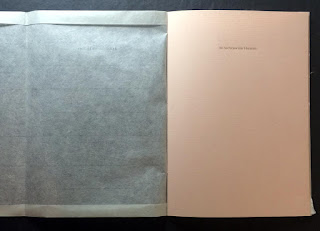 It's a lovely handmade gampi, with the printed title positioned to perfectly overlay the same line on the Roma wrap. Because the gampi is so thin, it's a little tricky fitting it around the book & getting it to stay in place - keeping the two lines in register - while sewing. 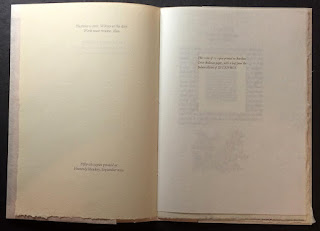 Here's the extra sheet included, with the leaf from a deluxe copy of XI LXIVMOS hinged to the verso. 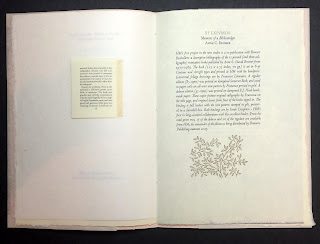