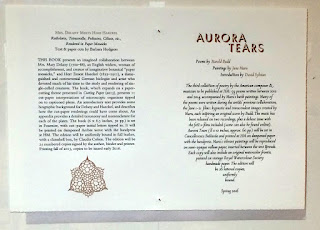 Printing a 12-page pamphlet chronicling HM's plans for the next two years. First out will the XI LXIVMOS, copies of which are being bound up by Sarah Creighton as I type. As soon as the pamphlet is finished I'll start printing a new book by Barbara Hodgson (see image below); more about that next week. Then a new collection of poems by Harold Budd, to be issued early next year. I tried out my can of very expensive bronze ink for the first time (and yes, there was a titling figure mixed in with the ranging two's)... 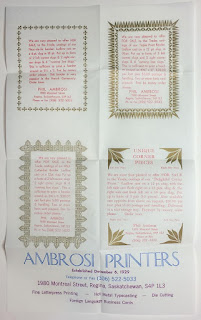 Unrelated, I was going through a stack of old Type & Press that David Clifford gave me years ago, copies 84 to 100 (the last issue published, Summer 2000). Tucked into a couple of the older copies were elaborate promotional broadsides from Phillip Ambrosi. Based in Regina, Saskatchewan he was a job printer who also specialized in (Linotype) rule casting. The broadsides are beautifully printed on an onion skin-type paper. He closed his shop down just last year; there's a brief article about him on the last page of this paper. 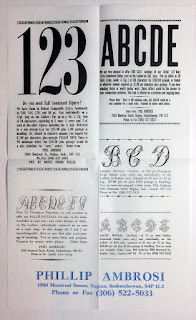 This stack of Type & Press makes for great reading. Nothing precious or "fine" about it, just old-school job printing, with headlines like "Moving Printing Equipment Easily!" (but no mention of handpresses in that one) and "The Pearl - A Jewel of a Press." One headline that caught my eye was on the front of issue 94 - Who Designed Times Roman? The article detailed American typographer Mike Parker's research & claim that the face had been "designed by an obscure American artist and produced by the Lanston Monotype Co. of Philadelphia, and not by the British Monotype Co., which for over 50 years had claimed credit for designing this famous face."

I particularly enjoyed this paragraph, in which the odious Giampa™ appears:

"Parker's interest was ignited when Canadian designer Gerald Giampa, owner of the remnants of the Lanston Monotype Machine Co. of Philadelphia, showed him a set of letters representing a familiar roman and an unfamiliar italic. Together they discovered that the letters were linked with a W. Starling Burgess, better known as a 'naval designer.' When Giampa found documents that bound him to silence of the subject of Burgess and his typefaces as owner of the Lanston remnants, he was forced to bow out."

Whatever reason Giampa had for bailing, it wasn't respect a contractual requirement. A summary of Parker's research is included in this history of Times Roman.